George Patton was commanding general of the Third United States Army, which participated in the invasion of occupied France, and later Nazi Germany, towards the end of the Second World War. During the spring of 1944, before the allied invasion at Normandy, General Patton gave a number of speeches to motivate his men, and to help prepare them for the ordeal they were soon to endure. They were all minor variations on the same speech, a version of which is included below. Some historians consider it to be one of the best motivational speeches ever made; and if you read it you may understand why.

Before letting the honorable General have his foul-mouthed, swaggering say, I would simply like to point out that any well-equipped, well-trained army led by a man like George “Blood and Guts” Patton would utterly crush the kind of military that the “progressive” left apparently insists upon today, with transsexual soldiers and goddamn PC sensitivity training. By reading the General’s speech, and considering the mentality of the US soldiers of WW2, less than 75 years ago, one may get some inkling of how far the men of the west have degenerated. But read it for yourself.

Incidentally, a “Boche” is a German soldier. 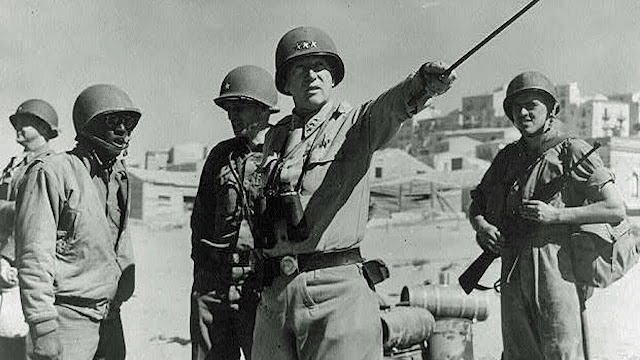 Men, all this stuff you hear about America not wanting to fight, wanting to stay out of the war, is a lot of bullshit. Americans love to fight. All real Americans love the sting and clash of battle. When you were kids, you all admired the champion marble shooter, the fastest runner, the big-league ball players and the toughest boxers. Americans love a winner and will not tolerate a loser. Americans play to win all the time. That's why Americans have never lost and will never lose a war. The very thought of losing is hateful to Americans. Battle is the most significant competition in which a man can indulge. It brings out all that is best and it removes all that is base.

You are not all going to die. Only two percent of you right here today would be killed in a major battle. Every man is scared in his first action. If he says he's not, he's a goddamn liar. But the real hero is the man who fights even though he's scared. Some men will get over their fright in a minute under fire, some take an hour, and for some it takes days. But the real man never lets his fear of death overpower his honor, his sense of duty to his country, and his innate manhood.

All through your army career you men have bitched about what you call 'this chicken-shit drilling.' That is all for a purpose—to ensure instant obedience to orders and to create constant alertness. This must be bred into every soldier. I don't give a fuck for a man who is not always on his toes. But the drilling has made veterans of all you men. You are ready! A man has to be alert all the time if he expects to keep on breathing. If not, some German son-of-a-bitch will sneak up behind him and beat him to death with a sock full of shit. There are four hundred neatly marked graves in Sicily, all because one man went to sleep on the job—but they are German graves, because we caught the bastard asleep before his officer did.

An army is a team. It lives, eats, sleeps, and fights as a team. This individual hero stuff is bullshit. The bilious bastards who write that stuff for the Saturday Evening Post don't know any more about real battle than they do about fucking. And we have the best team—we have the finest food and equipment, the best spirit and the best men in the world. Why, by God, I actually pity these poor bastards we're going up against.

All the real heroes are not storybook combat fighters. Every single man in the army plays a vital role. So don't ever let up. Don't ever think that your job is unimportant. What if every truck driver decided that he didn't like the whine of the shells and turned yellow and jumped headlong into a ditch? That cowardly bastard could say to himself, 'Hell, they won't miss me, just one man in thousands.' What if every man said that? Where in the hell would we be then? No, thank God, Americans don't say that. Every man does his job. Every man is important. The ordinance men are needed to supply the guns, the quartermaster is needed to bring up the food and clothes for us because where we are going there isn't a hell of a lot to steal. Every last damn man in the mess hall, even the one who boils the water to keep us from getting the GI shits, has a job to do.

Each man must think not only of himself, but think of his buddy fighting alongside him. We don't want yellow cowards in the army. They should be killed off like flies. If not, they will go back home after the war, goddamn cowards, and breed more cowards. The brave men will breed more brave men. Kill off the goddamn cowards and we'll have a nation of brave men.

One of the bravest men I saw in the African campaign was on a telegraph pole in the midst of furious fire while we were moving toward Tunis. I stopped and asked him what the hell he was doing up there. He answered, 'Fixing the wire, sir.' 'Isn't it a little unhealthy up there right now?' I asked. 'Yes sir, but this goddamn wire has got to be fixed.' I asked, 'Don't those planes strafing the road bother you?' And he answered, 'No sir, but you sure as hell do.' Now, there was a real soldier. A real man. A man who devoted all he had to his duty, no matter how great the odds, no matter how seemingly insignificant his duty appeared at the time.

And you should have seen the trucks on the road to Gabès. Those drivers were magnificent. All day and all night they crawled along those son-of-a-bitch roads, never stopping, never deviating from their course with shells bursting all around them. Many of the men drove over 40 consecutive hours. We got through on good old American guts. These were not combat men. But they were soldiers with a job to do. They were part of a team. Without them the fight would have been lost.

Sure, we all want to go home. We want to get this war over with. But you can't win a war lying down. The quickest way to get it over with is to get the bastards who started it. We want to get the hell over there and clean the goddamn thing up, and then get at those purple-pissing Japs. The quicker they are whipped, the quicker we go home. The shortest way home is through Berlin and Tokyo. So keep moving. And when we get to Berlin, I am personally going to shoot that paper-hanging son-of-a-bitch Hitler.

When a man is lying in a shell hole, if he just stays there all day, a Boche will get him eventually. The hell with that. My men don't dig foxholes. Foxholes only slow up an offensive. Keep moving. We'll win this war, but we'll win it only by fighting and showing the Germans that we've got more guts than they have or ever will have. We're not just going to shoot the bastards, we're going to rip out their living goddamned guts and use them to grease the treads of our tanks. We're going to murder those lousy Hun cocksuckers by the bushel-fucking-basket.

Some of you men are wondering whether or not you'll chicken out under fire. Don't worry about it. I can assure you that you'll all do your duty. War is a bloody business, a killing business. The Nazis are the enemy. Wade into them, spill their blood or they will spill yours. Shoot them in the guts. Rip open their belly. When shells are hitting all around you and you wipe the dirt from your face and you realize that it's not dirt, it's the blood and gut of what was once your best friend, you'll know what to do.

I don't want any messages saying 'I'm holding my position.' We're not holding a goddamned thing. We're advancing constantly and we're not interested in holding anything except the enemy's balls. We're going to hold him by his balls and we're going to kick him in the ass; twist his balls and kick the living shit out of him all the time. Our plan of operation is to advance and keep on advancing. We're going to go through the enemy like shit through a tinhorn.

There will be some complaints that we're pushing our people too hard. I don't give a damn about such complaints. I believe that an ounce of sweat will save a gallon of blood. The harder we push, the more Germans we kill. The more Germans we kill, the fewer of our men will be killed. Pushing harder means fewer casualties. I want you all to remember that. My men don't surrender. I don't want to hear of any soldier under my command being captured unless he is hit. Even if you are hit, you can still fight. That's not just bullshit either. I want men like the lieutenant in Libya who, with a Luger against his chest, swept aside the gun with his hand, jerked his helmet off with the other and busted the hell out of the Boche with the helmet. Then he picked up the gun and he killed another German. All this time the man had a bullet through his lung. That's a man for you!

Don't forget, you don't know I'm here at all. No word of that fact is to be mentioned in any letters. The world is not supposed to know what the hell they did with me. I'm not supposed to be commanding this army. I'm not even supposed to be in England. Let the first bastards to find out be the goddamned Germans. Some day, I want them to rise up on their piss-soaked hind legs and howl 'Ach! It's the goddamned Third Army and that son-of-a-bitch Patton again!'

Then there's one thing you men will be able to say when this war is over and you get back home. Thirty years from now when you're sitting by your fireside with your grandson on your knee and he asks, 'What did you do in the great World War Two?' You won't have to cough and say, 'Well, your granddaddy shoveled shit in Louisiana.' No sir, you can look him straight in the eye and say 'Son, your granddaddy rode with the great Third Army and a son-of-a-goddamned-bitch named George Patton!'

All right, you sons of bitches. You know how I feel. I'll be proud to lead you wonderful guys in battle anytime, anywhere. That's all. 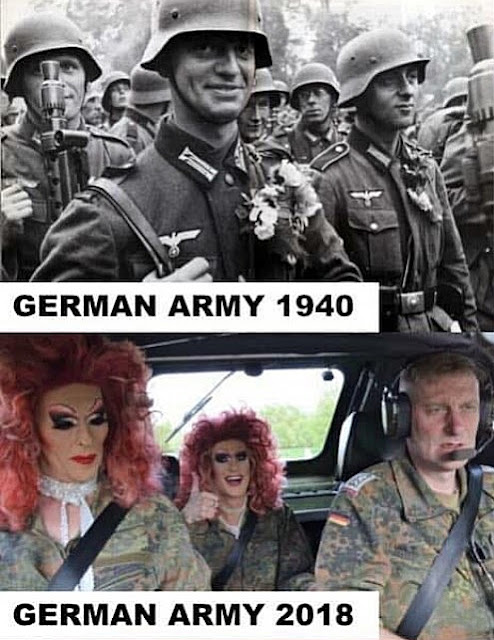