Antistructure and Voidness in Early Buddhism

Nor by morality and observances is purity said to be;

By amorality, by nonobservance—also not by that.

So having let go of these, not taking hold of anything,

A peaceful one, not being dependent, would not have longings for existence.

This post is maybe the last one that I will write which has been spawned by The Trickster and the Paranormal by George P. Hansen. Or maybe I will keep writing on this one until it grows into a miniseries: I don’t yet. Even so, the theory Hansen puts forth in the book has been incorporated into my world view and will be showing signs in what I write from now on. Anyway this particular essay is on a very Buddhist topic, despite the fact that Hansen’s book hardly mentions Buddhism at all. His theory fits Buddhism very nicely though, as I hope to explain in what follows.

A main point of the book is that paranormal or “supernatural” events arise from the weakening or relative breakdown of regular structure in our world, especially in our psychological and social world. They arise from ambiguity, the transgressing of boundaries, antistructure, fluidity or liminality. Paranormal events in a Buddhist context would include not only the psychic powers which can arise through meditation, and the synchronicities and odd coincidences that can occur around meditators and mystics, and sightings of ghosts and other apparitions, but would include even enlightenment itself.

Enlightenment or the attainment of Nirvana is paradoxical and “supernatural” because it cannot be the result of a cause—if it did it would be conditioned, impermanent, and conducive to suffering—which of course would indicate that it was not really enlightenment. (Also it would presumably imply some individual “self” who becomes enlightened, which also would be paradoxical, especially from the No Self perspective of Buddhism. I may as well add that this ambiguous and non-logical nature of enlightenment is probably one of the main reasons why so many materialistic western Dharma teachers sold on western materialism and rationalism are so likely to dismiss its very possibility.) Christianity seems to have accepted this miraculous sort of idea from the beginning with its doctrine of Divine Grace: salvation is essentially a supernatural event, being what gets someone into heaven, and not subject to mundane forces or mundane logic. For that matter, heaven itself, and presumably God Itself, would be considered supernatural, paranormal, and miraculous—Divine.

Though the author of the book mentions Buddhism in particular hardly at all, he does include an early chapter on monks and mystics, mostly Christian ones. He points out that the most extreme documented cases of paranormal activity are usually associated with religious mystics. Also a section in a different chapter discusses the paradoxical qualities of meditation, a mainstay of Buddhist practice. His argument is based on reflexivity and self-reference, which is a point that deserves its own paragraph.

As the mathematician Kurt Gödel more or less proved in the realm of mathematics, self-reference opens the door to paradox and the breakdown of logical structure. Consider the statement “This statement is false.” This statement, largely because it refers to itself, can be neither true nor false, and thus defies Aristotelian logic, the so-called Rules of Thought. If the statement is true then it really is false, and if it really is false, then it’s not false, but true. Whenever there is reflexivity of this sort, paradox and ambiguity are lurking somewhere nearby…and meditation, as Dr. Hansen observes, is self-referential and reflexive; it is a case of the mind observing itself. Thus meditation opens the door to the magical and miraculous, which presumably includes the ultimate goal of Buddhism, enlightenment.

This is fascinating to me; but the main thing that really struck me when comparing the book with my understanding of Buddhism is how it compares with the message of the Atthakavagga of the Sutta-Nipāta. I consider the Atthakavagga to be probably the oldest Buddhist document in existence, or the largest fragment of very early, “primitive” Buddhism, and it is practically my Bible in Buddhism and has allowed me to be a sincere Buddhist despite my skepticism, wide-open mysticism, and disdain for dogma and formulaic, cookbook religion.

The Atthakavagga teaches that a serious monk should have no view, no belief system, no perception. None whatsoever. Even to believe that he should have no beliefs is too much. Add this total absence of reliance on philosophical views to the socially liminal state adopted by early Buddhist ascetics: renouncing family ties, social rules, and social status and wandering homeless in forests, wearing rags, and silently begging for one’s food in the streets, disdaining even ordinary human desires for companionship, comfort, and security. It is difficult to imagine a lifestyle that is more extreme in its antistructure. Almost the only rules that aren’t broken or abandoned (formalized rules of monastic discipline apparently not existing yet in those days, with the Atthakavagga in fact implying that rules are a hindrance) are the most basic, unavoidable laws of nature that hold this world together.

Whatever common conventions there are,

An experienced one does not have recourse to any of them.

How would he without recourse come to have recourse

When not making submission to the seen and the heard?

Those who think morality is supreme say purity is by self-restraint;

Having taken upon themselves an observance they are dedicated to it.

“Let us train ourselves right here and now, and then there would be purity”—

Claiming to be adepts, they are brought up to further existence.

If he is fallen away from his morality and observances

He is agitated, having failed in his action.

He longs for and aspires to pure freedom from wrong

Like one who has lost his caravan and is far from home.

But having abandoned all morality and observances,

And that action that is criticized or uncriticized,

Not aspiring to “purity” or “non-purity,”

He would live refraining, not taking hold even of peace.

Depending upon ignorant darkness or upon something being shunned in aversion,

Or then again upon the seen, the heard, or the felt,

In their going on they cry for purity

With craving not gone for this or that existence.

All this is reminiscent of another favorite Sutta of mine, which presumably is also a relatively early one, the Small Discourse on Emptiness in the Majjhima Nikāya (M121), which describes a monk’s cultivation of emptiness or voidness, suññata. The very first thing he does of course is to get the hell out of town and move into a forest. This immediately removes him from the formality of social rules, the structured beliefs of other people, and the artificial regularity of straight lines and right angles. After attaining that degree of emptiness—emptiness of boundaries, of systems, of socialization—he then cultivates emptiness in his mind by cultivating meditative jhāna, in which he stops thinking altogether, thereby eliminating, at least temporarily, the structure of his own thoughts and beliefs. And it is from this emptiness, this voidness, this nonexistence of regular structure, that liberating insight arises. Eventually one realizes that even that, even that degree of emptiness found in the deepest meditative states, is not “it,” that NO state that can be cultivated is “it,” being conditioned, having a beginning and an end, and this realization somehow, miraculously, jolts one right out of the samsaric system of this world.

Some of the early Mahayanists and a lot of those stick-wielding medieval Zen masters “got” this about the importance of antistructure and emptiness, but most of the Theravadins lost it pretty quick, and locked everything up, the entire universe, into a systematized structure of Abhidhamma and commentarial exegesis. For the past two thousand years a Theravada Buddhist becomes enlightened as much in spite of his sacred scriptures as because of them.

I realized just recently in the shower (I often have inspirations while bathing) that Hansen’s liminality or antistructure is essentially the same as Buddhism’s emptiness or voidness, especially when taken to their absolute limits. Structure is perceptual, and is Samsaric. Antistructure is thus to some degree anti-Samsara; it weakens it. And Nibbāna/Nirvana is the complete transcendence of all distinctions and boundaries. They may seem to persist afterwards, but they are no longer included in one’s identity, and are no longer taken so seriously, as something “real.”

I used to have a little motto, Perception is Samsara. Now I have another one: Structure is Samsara. I may as well add: Distinctions are Samsara (Nippapañca, a synonym for Nibbāna, can be translated fairly literally as “absence of distinction”). Boundaries are Samsara. Rules and Laws are Samsara. And from the absence of structure and all the rest, the miraculous arises, not bound to logic and laws, with full enlightenment arguably being the greatest miracle of them all.

What Buddhism doesn’t explicitly state is that magic arises from Voidness, and from the ultimate Voidness that is ultimate reality, all that is possible in the world arises. Then again, another meaning of māya, or worldly illusion, is the magic performed by magicians. Maybe the idea of illusions magically arising from the non-structure of Voidness was explicitly stated at one time in early Buddhism, and in Hindu texts the magical nature of Māya, the consort of Brahmā, certainly is addressed. But every aspect of Māya is impermanent and changing, including Buddhism itself.

The day after I finished writing this essay, just now in fact, I was struck by another aspect of liminality or antistructure in Buddhist philosophy: the idea of the Middle Way between extremes. Dr. Hansen in his book describes liminality in terms of being on a threshold between polar opposites (and the word liminal itself is derived from the Latin word for “threshold”), so a middle path between extremes could also imply another form of logical ambiguity and refusal to cling to one distinction or another. The Middle Way, incidentally, applies not only to the middle path between self indulgence and self torture, but also can walk the ambiguous path between All Exists and Nothing Exists, Self and No Self, Unity and Plurality, Free Will and Determinism, and a host of other antinomies. 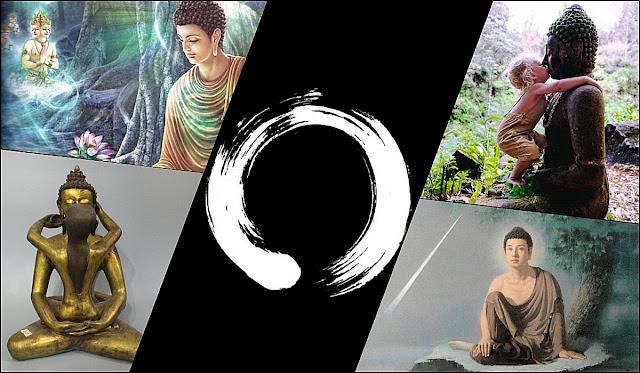