A Strange Burmese Morning (in California)

Oh, East is East, and West is West, and never the twain shall meet… —Rudyard Kipling

I usually go to sleep at between two and three in the morning since I have been living in California, after my final return from Burma. I’m a night person. Last night I didn’t fall asleep until a little after three. So when somebody started knocking on my door at around 8:30 this morning I tried to ignore it.

But the person kept on knocking, in accordance with Burmese tradition, causing me to feel unsure of the success of my strategy of peaceful non-cooperation as I huddled under my blankets and tried to go back to sleep. Finally, undaunted, whoever it was came around to the bedroom end of the little meditation trailer and informed me through a window that my presence was desired at 9am for chanting paritta. He said this in broken English with a Burmese accent, so I assumed it was one of the other monks here. Usually a junior venerable one called small U Nyanissara (not to be confused with large U Nyanissara who also lives here—Nyanissara being a pretty common monk name in Burma) is the one designated to knock on my door and challenge my repose and serenity.

Paritta, as some of you may know, are Buddhist chants of protection and blessing. Sometimes monks are invited to people’s houses to bless the house and dispel dark forces, usually by chanting the Metta Sutta and other texts considered by some ancient monks to have special protective powers.

Anyway, when he requested my presence at the paritta chanting I gave a noncommittal grunt, acknowledging that I had heard but not exactly agreeing to be there. I huddled deeper into the blankets and tried to go back to sleep, at the gawd-awful hour of 8:30 in the morning, still practically the middle of the night.

But the Burmese are very stubborn when it comes to knocking on doors and summoning people, so I eventually reconciled myself to the idea of getting up before nine. I figured we were invited to somebody’s house for chanting, a sermon, and a meal, as sometimes happens. I sat up, took a quick look at notifications on the laptop, sent a good morning to my sweetheart, got dressed, and sure enough at nine o’clock the Burmese monk came back, once again requesting my presence for chanting. It was a visiting monk from a monastery or temple in the eastern United States. He has been very friendly to me and talks to me at the breakfast table sometimes, and he is less of a cross to bear than small U Nyanissara’s insistent door-pounding, or venerable U Kovida’s continual practice of camping out in the bathroom. I asked him where we were going, still expecting a trip to somebody’s house for lunch, and he said, “out in front.”

So then I figured maybe a car was waiting out in the parking lot in front to pick us up and drive us to wherever chanting was desired…with an alternate hypothesis being that we would chant for visitors in the main shrine room inside, which is kind of at the front of the main monastery building. But when I walked out to the front parking lot I found an oldish grey-black Audi parked in the shade, with its hood up, and with seven plastic chairs arranged in a semicircle around the hood end. Five of the chairs were already occupied with Burmese monks, and they were all holding the same length of stout yellow thread or fine twine. They were cheerfully waiting for me to take my seat, grab onto the thread, and help chant paritta for this car.

I brought a bottle of water with me, as I didn’t know what the plan was upon leaving the trailer, and upon seeing the water in my hand two other monks were reminded that water works as well as thread for absorbing monks’ blessings, so they went and got bottles for themselves, removing the lids so that the blessings could absorb into the water more effectively.

So I sat down, took the thread in my hand, and asked whose car it was. Some of the monks grinned as I was informed that it belongs to the friendly visiting monk. It appears that he is soon to set out on a road trip back to his home monastery, so he wanted the car blessed to prevent it from breaking down or crashing on the way.

For some mysterious reason that I’m not sure I want to understand, the chanting was much more thorough than the usual house blessing. The monks chanted maybe five of the main eleven blessing chants, most of which I have forgotten. (I was never really into devotional chanting, which is what most of the paritta are—very worshippy, don’t you see—with a few of them being strange fairy tale stories, like the Vatta Sutta, about the Buddha in a previous existence as a baby quail who averts a deadly forest fire by announcing a solemn declaration of truth, in poetical Pali.

So I held my own and chanted the Metta Sutta with the others, which is very nice and the one text that monks chant most often, and sort of limped along with the Khandha Sutta, which is mainly a protection chant against snakes and which I also like. Also I still have memorized the extra stuff at the end, like chanting the qualities of Buddha, Dhamma, and Sangha, etc. Throughout the rest of it, which was more than half, I sat there silent and half asleep. Occasionally I would whisper to myself the word “fuck” as I sat through another esoteric Burmese ceremony, this time for blessing a monk’s car.

I have to admit though that it was a lovely spring morning today, and the air was fresh, and getting up early (practically the middle of the night still) wasn’t a total disaster, although I suppose I still would have preferred sleeping in for another hour. And we didn’t actually have to go anywhere. Being hauled out of bed at little or no advance notice to climb into a car and ride for anywhere between 15 minutes and two hours to arrive at someone’s house to eat (usually) traditional Burmese and/or Chinese food, is less common than before the Lung Pao Sicken was unleashed on the world, but still it does happen, and it’s not my scene at all—though sometimes the food is pretty good, especially if you like rice.

So anyway after the monks finished chanting around the front of the car, the visiting monk reeled in the paritta thread, put the cap back on his bottle of paritta water, closed the hood of his Audi, and we were all free to go. Shortly after returning to my trailer out back a monk knocked on my door again, this time U Ukkamsa, saying that he had an envelope of navakamma (Burmese euphemism for money given to monks), and so he put it into the donation jar. I asked him who it was from, and he informed me that the donor was the visiting monk.

Anyhow, to make a short story medium length, at 11:00am I went inside the main building with my alms bowl and sat down at the kitchen table. A very nice Burmese doctor and his even nicer tiny wife, who offer food almost every Thursday, offered some fairly standard Burmese food plus some unusual (for here) pickled artichoke hearts, which I mixed with the rice, chicken, mushrooms, broccoli, scrambled eggs, and pea soup. The visiting monk who just got his car blessed sat opposite me at the table, and as usual he was friendly and was asking me questions about my life in Burma, like where I stayed the longest (more than eight years at Wun Bo Wildlife Refuge Monastery, in Butalin township), how I meditate, what kind of results I got…and whether I am enlightened. With regard to that last one I told him I didn’t know what I am, not wanting to say I’m enlightened of course but not wanting to lock myself down to any category either, after which he donated another envelope of money to me, which U Ukkamsa took out to the trailer and inserted it into the donation jar with the first one. I don’t accept money into my own hand, and am the only one here to be like that, so the others act as “kappiyas” (monk attendants) and handle the money for me.

The friendly, curious, generous monk will start his drive back to Kentucky, it turns out, in his blessed Audi tomorrow morning, and I may very well never see him again. In fact I’ll probably never hold thread and chant to bless a car ever again either—especially considering that that was my very first time doing it, ever. Life is strange. 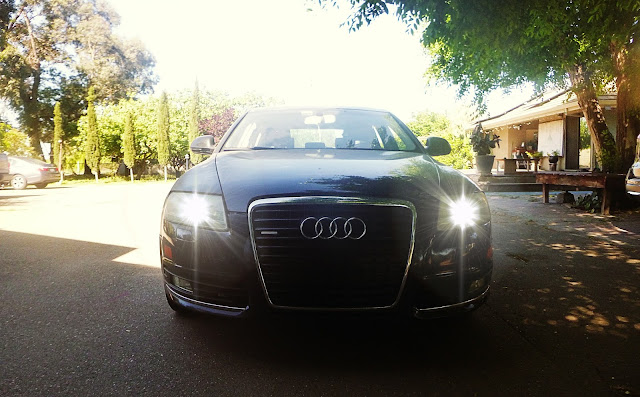