Recently I did a video Q&A in which mysticism was a prevalent theme. It comes up a lot actually, in the questions that people ask me. It may not come up as often as the issues of karma and rebirth, or the ethics of this or that action, but it is a topic that many people do not understand very well—in fact many people, including brilliant intellectuals, are mystified by the subject. And notice that “mystify” and “mysticism” have the same root. Nevertheless, it is a very important subject, what I consider to be the key to enlightenment.

Before getting any farther with this I suppose I should attempt a definition of mysticism. So, mysticism is the direct experience of ultimate reality by temporarily abandoning perceptual thought. Perceptual thought is necessarily symbolic, and of course symbols are not the same as what they seem to represent. The letters T-R-E-E on a piece of paper or a computer screen, or the spoken word “tree,” or even the most detailed mental representation of a tree, is radically, qualitatively different from what a tree really is. So in order to experience the highest truth one must abandon, temporarily at least, the dependence upon symbolic thought, which is perception. Perception is Samsara. This of course presupposes that ultimate reality is infinite and formless—or else the mystic adopts that position with experiential certainty during or after the experience. What is infinite and formless, like “God” for example, clearly cannot be contained, or clearly represented, in a thinking mind. One must simply abandon the thoughts and merge with the reality, which after all is pervading the entire universe. Or, if you prefer a dictionary definition, here is the one on my computer’s default dictionary, the New Oxford American Dictionary, 3rd edition:

1 belief that union with or absorption into the Deity or the absolute, or the spiritual apprehension of knowledge inaccessible to the intellect, may be attained through contemplation and self-surrender.

But even though mysticism is of essential importance in spirituality, there are many Theravadins who have no use for it at all, and the very subject is rather controversial. A classic example is one of the most famous and influential of all western bhikkhus, the British monk venerable Nyanavira. The man was very much an intellectual, and a serious bhikkhu, yet he absolutely despised mysticism, and simply to label something as “mysticism” sufficed as a refutation in his view. According to him, mysticism is little more than sloppy thinking, a violation of Aristotle’s laws of thought. I’ve gone over this before, but I may as well list off the three laws of thought here, which such a famous bhikkhu considered to be some kind of Law of the Universe:

2. A is not equal to not-A. (The Law of Noncontradiction)

3. Anything must be either A or not-A. (The Law of Excluded Middle)

According to Nyanavira, mysticism violates all three laws, with statements like the “luminous darkness” of the Christian mystics, or the repeated claims of the Diamond Cutter Sutra that a bodhisattva is a bodhisattva because there is no bodhisattva, or this strange statement attributed to Nagarjuna: “Everything is true; nothing is true; everything is both true and not true; everything is neither true or not true. This is the teaching of Buddha.” Any number of such self-contradictory statements can be found in mystical literature, in Buddhism and in any other religion with mystical elements. Being an extremely head-oriented intellectual as he was, Nyanavira considered such paradoxical statements to be utter nonsense and nothing more. He did not appreciate the fact that mystics deliberately speak in riddles and paradoxes practically of necessity, since mysticism ultimately is nonverbal and cannot be contained in words or concepts. Such attempts to “figure out” reality are to be discouraged by blowing the intellectual mind with koans and paradoxes. Nyanavira evidently believed that anything can be sufficiently described intellectually, which constrained him to believe, for example, that Nibbana/Nirvana is nothing more than extinction. One of his senior disciples wrote a book in which he refused to translate into English the self-contradictory and illogical term Nevasaññānāsaññāyatana, literally the “sphere of neither perception nor non-perception, which is the highest plane of phenomenal existence and the highest sphere attainable through meditative absorption.

Many Burmese scholar monks (and it seems like most Burmese monks are scholars) similarly have the idea that the highest reality must be graspable by the intellectual mind. In fact this idea has been prominent in Theravada since the advent of the Abhidhamma philosophy at the latest, i.e. since Theravada as a distinct school of Buddhism began. Abhidhamma attempts (mistakenly, in my opinion) to categorize and formularize all of reality, from physical matter to consciousness to Nibbana itself. According to Abhidhamma, Nibbana is ultimately real, but still no more real than heat, or color, or masculinity, or tongue-sensitivity; it’s just one of many ultimate realities existing in a pluralistic and intellectually graspable universe. Even the highest reality is within the grasp of the intellectual scholar—so long, of course, as he follows the Right View of Abhidhamma. Most western monks and serious western Buddhists have little use for Abhidhamma, and people like Nagarjuna and the formulators of the Prajna-Paramita Sutras and of Zen were attempting to reform Buddhism by steering away from such an attempt to formularize reality. The highest truth simply cannot be understood by thinking about it. The best thinking can do is to realize its own limitations, plus of course to aid in one’s worldly navigation through Samsara.

So orthodox Theravada became known, even in relatively early times, as Vibhajjavāda, the doctrine of (intellectual) analysis or discrimination. It had the advantage of stabilizing Buddhist philosophy to some degree by nailing down all loose ends, but it closed much of the orthodox philosophy to mysticism, which, as I say, the key to enlightenment. Mysticism itself became confused with hypnotic trance states. (This may help to explain why there are so few enlightened Theravada Buddhists, but of course that particular situation is much more complicated than that.)

But even though orthodox Theravada became extremely intellectualized, making it popular with intellectual people with a need for systematic explanations for everything (among other types), the early Suttas and also advanced Buddhist practice have always featured mysticism as a fundamental element. Even the aforementioned highest samsaric state, the “sphere of neither perception or non-perception,” is indicative of a mystical transcendence of intellectual thought, yet without sinking into unconsciousness—it is in fact a VERY conscious state, a state of expanded consciousness temporarily approximating full enlightenment.

Not only the highest meditative states, that is any state above first jhāna, are essentially a mystical state transcending perceptional forms, but many of the very early texts endorse the abandonment of intellectuality even in ordinary consciousness. This in fact is one of the main themes of my favorite collection of Buddhist texts, the Atthakavagga of the Sutta-Nipata. The following is from a very ancient, even archaic and pre-Theravadin text, the Suddhatthaka Sutta, or Eight-Versed Discourse on the Pure:

If by view purity is for a man / Or by knowledge he abandons unease // Then he who is already encumbered is purified by something extra / Indeed, the view betrays him claiming in this way

A holy man does not say that purity is from anything extraneous— / From the seen, from the heard, from morality and observances, or from the felt // Not mired by merit or by evil / Leaving behind what was acquired, he is not working up anything here

The same discourse ends, in its eighth verse, with this conclusion:

The holy man has gone beyond boundaries—by him there is nothing / He has known or seen that is seized upon // He has no passion for passion, he is not impassioned for dispassion / By him nothing outward has been taken up here

It should be noted that even thoughts are considered in the Atthakavagga, and by orthodox Theravada in general, to be outward or extraneous. Also the half-verse mentioning a sage’s attitude towards passion is verging into the realm of koan. But one of my favorite Theravadin koans is in a later discourse of the Atthakavagga, verse 13 of the Kalahavivāda Sutta, or Discourse on Quarrels and Contentions, which incidentally contains an archaic prototype of dependent co-arising:

This of course is well into the realm of paradox, and is describing in cryptic language the attitude of an enlightened sage. Again, the highest truth cannot be reached by the intellect, and so baffling the thinking mind, in order to silence it, is about the best one can do to understand the highest truth. This has been taught by most if not all enlightened sages, and in my opinion the sage called Gotama Buddha attempted to purify mysticism by removing all extraneous paraphernalia…though when Buddhism became a popular, mainstream spiritual system with scholarly intellectuals joining the ranks, and eventually even becoming the presbyters of the new religion, such an airless void was just too much, and so it was replaced by a stupendous scholastic philosophy. But the underlying silence and “luminous darkness” of ineffable reality remains, hiding between the lines of the texts, and coming to full flower in the hearts of meditating sages. 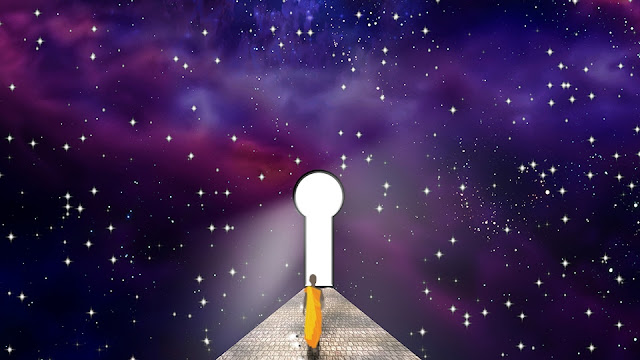