Is Muslim Immigration Some Kind of Plot?

Well by golly I can’t think of a single goddam quote to go here.

This installment of this here blog is largely a case of me wondering out loud—or at least it would be out loud if I were actually saying it instead of typing it. I don’t really have the answers. I’m just wondering, and guessing, and occasionally shaking my head.

I often find the comments sections of blog posts, news articles, and YouTube videos to be more informative and/or entertaining than the post, or whatever, on which they are commenting. At the very least I get some insight into what the opinions of the common person, “out there,” are. And one idea that continually comes up in political comments sections, more so than in the posts (etc.) on which they are commenting, is the idea that the influx of Muslim migrants into Europe (and to some degree other countries like Canada, and America too if Trump hadn’t been elected) is indicative of a deliberate attempt on the part of the Powers That Be (George Soros often being mentioned, along with Jews as a racial/political category—although surprisingly the Illuminati are rarely included) to somehow further the leftist/globalist agenda of a cultural Marxist New World Order. The comments section philosophers and conspiracy theorists produce a number of different arguments, not all of which could be true at the same time, I think, each preferring his own hypothesis, and sometimes even producing scraps of evidence. I can’t help but wonder.

An obvious sort of conspiracy theory is the idea that, like the Democratic Party in America favoring the influx of low-skill, low-education immigrants (partly because they rely on the dole of the welfare state and thus favor and vote for leftist government), European leftists are doing the same, except with Africans and Middle Easterners instead of Mexicans. I’ve read that the mass influx of non-European Muslims into the UK began during Tony Blair’s Labour government in the 1990’s, with which he notoriously “rubbed the Tories’ nose in multiculturalism”—so it presumably began with a more or less socialist Left addressing its own interests anyhow. The new migrants may thus be regarded as a new leftist voting bloc. (The more rightist capitalists, as in the USA, presumably followed along more or less willingly as they saw the immigrants as a cheap labor force to keep wages down and corporate profits up.) Stefan Molyneux on his YouTube videos endorses a form of this theory for Muslim immigration into the EU, saying, “They can’t win the intellectual debate, so they’re importing voters.”

A variation on this theme is the “population replacement” theory. Presumably the governing Dominions, Principalities, and Powers consider white Europeans to be too intelligent, or freedom-loving, or stubborn, or whatever; and so they intend to replace these white Europeans with people who are easier to control and to keep under subjection. The main problem I see with this theory is that the white Europeans of Europe seem very much more docile and tractable than the people who allegedly are intended to replace them. But the possibility that such a policy would be an idiotic blunder would not rule it out as a viable possibility for a “progressive” leftist agenda.

Another common allegation is that western European governments deliberately imported millions of foreign migrants with the purpose of imposing multiculturalism, in turn for the purpose of destroying individual nations’ cultural roots, subverting nationalistic sentiments and facilitating an eventual global superstate, or at least a European one. This is plausible; it does make some sense. The trouble is, though, that traditionalist Muslims will probably retain their own cultural heritage while that of the more docile, tractable Europeans is undermined, possibly resulting in a modern sequel to medieval Moorish Spain. So individual European nations would give way to a more homogeneous society—but it would be non-European, not in accordance with “European values.” It should be fairly obvious to anyone not blinded by PC hysteria that traditional Islam is flatly incompatible with the semi-morality of the new progressive left, with its female immodesty, contempt for masculinity, glorification of sexual aberrations, etc. Only the most irrational of PC ideologues could not see that by importing millions of traditional Muslims they are importing tens or hundreds of thousands of vehement, violent future enemies. If anti-nationalists wanted to erode national cultural boundaries and homogenize European society into something progressively modern and not medieval, it would seem that they could have come up with a much less brain-dead strategy than that. But again, the idiocy of a theory does not necessarily rule it out as a possibility.

A variant of the preceding theory is that, as the EU leaders claim they intend to establish an army, Muslim migrants, most of them young men of military age, are to be recruited into that army as non-patriotic mercenaries—to be employed against the people of Europe in the overthrow of nation states and the enforcement of EU solidarity. This is not entirely impossible, I suppose; and it’s pretty damn likely that, regardless of any master plan, many Muslim migrants would be recruited into such an army in order to get them employed and off the streets. This would result in a rather creepy replay of the final decades of the western Roman Empire, in which weak, decadent Europeans depended upon undependable foreign “barbarian” mercenaries to fight for them—and were eventually conquered by an army no longer their own.

Another, more frequently seen allegation is similarly sinister: The Muslim migrants were welcomed in for the purpose of destabilizing society, in accordance with standard radical leftist procedure, essentially similar to the ideological subversion attempted in western countries by the Kremlin and KGB during the 20th century. The idea is that society is destabilized to the point of revolution, clearing the way for the overthrow of capitalist society and glorious Marxist comrades swooping in and taking control. But is the progressive left calling the shots, like, say, the feminists minding Sweden, really planning such a violent coup? So long as the change remained gradual, most Europeans seem decadent and sheeplike enough to go along with the feminization/socialization process, tending ever leftwards, without the need for the total destabilization and icky patriarchal violence of civil war. The influx of conservative African and Middle Eastern Muslims, many of whom reject “European values,” would seem actually counterproductive to the grand scheme—as a result of it, for instance, tens of millions of Europeans are now swerving toward the reactionary political right. Resistance to the progressive ideal is growing.

Yet another hypothesis is that, according to the orthodox political correctness of cultural Marxism, European civilization is the cause of all badness, and so it should be undermined and extinguished through swamping western countries with non-western immigrants. I’m guessing that this isn’t the main cause, or even a major contributing cause, of Muslim immigration, but that it is a factor, considering that hatred or at least resentment of western civilization is a fundamental platform of “progressive” neo-Marxism. This wouldn’t necessarily be a matter of population replacement, as mentioned above, so much as culture replacement.

With all due respect to conspiracy theorists and anti-Semites (←joke), what appears most likely to me is the following scenario: Various factors, including affluence, sophistication, and feminism, have resulted in negative or low population growth in several European nations. But the just-mentioned sophistication and feminism have also resulted in a socialized welfare state in these same nations—and you can’t have socialism without lots of babies, because then too many old people come to rely on the welfare state with too few young people entering the workforce to pay into and support the system. So, it was perceived (by the Dominions, Principalities, and Powers, or whomever) that importing migrants from other, more fecund nations could solve the problem. Then, the delusional “progressive” belief that all groups of people are the same, and equally likely to value postmodern European values, led European leaders, including eventually Angela Merkel in her infamous, astonishing lapse of sanity, to invite millions of African and Middle Eastern Muslims into Europe. This was also in part motivated by “progressive,” more or less feminine compassion for refugees, with most of the migrants desiring the benefits of a European welfare state and just pretending to be refugees. Also, apparently, pretending to be children in order to make it easier to get in. Followers of PC ideologies willfully blinded themselves to obvious and not so obvious facts, going with such “enlightened” ideas as, for instance, Somalian Muslims couldn’t cause problems because they aren’t white men. So anyway, it seems to me that the main causes of the European (and to some degree Canadian) migrant crisis is mainly the result of organic defects in progressivism, feminism, and the new religion of political correctness. Then again, political correctness and its associated cultish behaviors also have been attributed to plots by neo-Marxists, especially the Frankfurt School, to destabilize western society, paving the way for Marxist revolution, bringing us right back to the realm of the sinister. And of course there may still be other plots more or less in the background, adding to the whole mess.

I keep thinking, how can escalating crime rates, a heavily burdened economy, or even civil war be good for Europe in the long run? How can wimpy feminized PC politicians and activists suddenly have enough backbone to plot violent upheaval on a continental scale? Is complete social upheaval necessary? Some comments section theorists obviously think so. For example, some say that race wars will necessitate a more repressive, more controlling government, and a justification for an EU army and/or martial law; or that the people of Europe (and Canada, and the USA also if at all possible), being at wit’s end, will turn to some neo-Marxist Big Government to save them. And of course, quite a few speculators on the fringe are willing to assume that evil Jews are simply making their move to destroy the goyim out of sheer spite and wickedness.

(With regard to blaming Jews in Europe for the mass influx of Muslims, I would guess that the Jews aren’t so stupid as to favor importing millions of the people who hate them the most in this world, and would probably start persecuting them as soon as they gained power. But that’s just my opinion. Maybe evil Jews are so much smarter than me that they can see how it would all make sense.)

At present I can’t really say what they’re thinking over there—although they must be thinking something—but again, it appears at present to be predominantly an outrageous, idiotic mistake, based largely on the delusional nature of PC political theory, driven by feminine emotional wishful thinking at the expense of objective, empirical reality. Then again, I have no idea what sinister schemes are being hatched behind closed doors. One thing is fairly certain though: Things are going to get a lot worse in Europe before they get any better.

If any of you out there have any other conspiracy theories, preferably plausible ones, to account for the current European migrant situation, feel free to let me know. No need to mention reptilian space aliens though, because I’ve already been apprised of that one. 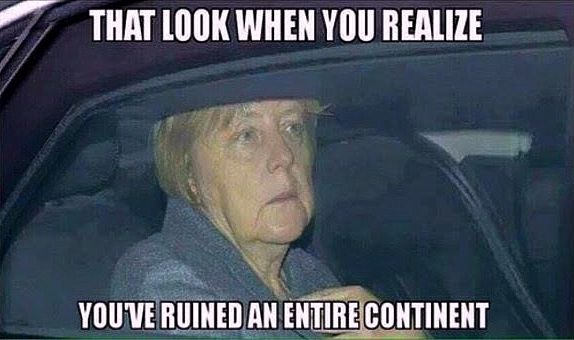