A Diagnosis of the Political Mass Hysteria in the USA


The revolution won't happen with guns, rather it will happen incrementally, year by year, generation by generation. We will gradually infiltrate their educational institutions and their political offices, transforming them slowly into Marxist entities as we move towards universal egalitarianism.  —Max Horkheimer, member of the Frankfurt School and founding father of Cultural Marxism

Never before in my life have I seen the sort of raging mass hysteria that has become a daily occurrence on the political scene of the United States. There are people older than I am, and who have followed American politics much more closely than I have, who are saying the same thing. In fact some people are asserting that what is happening now is totally unprecedented in all of American history. We have roughly half of the US population—the leftist/globalist half—led by most of the mainstream media outlets, overflowing with hatred and hostility toward the lawfully elected President of the United States. It’s phenomenal, practically biblical in its proportions. Why? How could such a tempestuous shitstorm of chaos possibly happen?

The leftists and globalists themselves obviously blame Mr. Trump, often in loud, shrill tones—he’s racist, sexist, xenophobic, a fascist, a warmonger, evil, a pathological liar, totally unhinged, desirous of destroying democracy and the US Constitution in order to become a king or totalitarian dictator, “literally Adolf Hitler,” so crude and vulgar as to be a national embarrassment, etc. etc. According to them we are in a state of national emergency; they must destroy the President by any means necessary, fair or foul, in order to prevent Armageddon and save the United States. 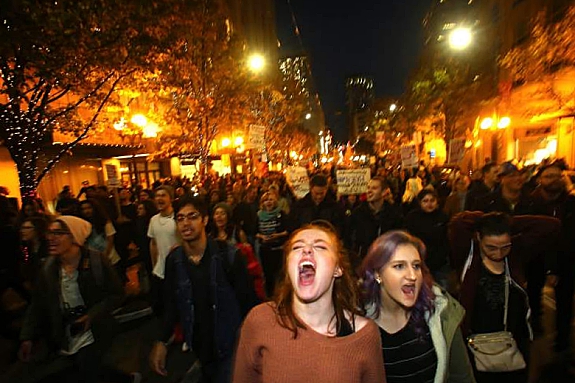 But an objective view of the big picture should be enough to dispel that excuse for mass hysteria. Donald Trump is many things, but an incompetent moron, or a psychopath bent on becoming dictator for life, isn’t one of them. The American economy is booming, setting records even. His foreign policy also is accomplishing more in the interests of the USA than that of his recent predecessors. America is prospering, with evidently the one exception to this being the violent rage against President Trump, and what he represents, coming from the globalists and the political left. Meanwhile, evidence continues to surface that it is Mr. Trump’s enemies who have been subverting democracy and the laws of the USA in their fervent attempts to prevent his election victory—and when those attempts failed, to subvert his presidency. Many people led on by the mainstream propaganda no doubt do consider Mr. Trump to be worse than Antichrist, but the propagandists themselves, and the people who pay them, no doubt have other reasons.

One political commentator for whom I have much respect, Victor D. Hanson, has expressed the opinion that the left especially is howling at the sky because they felt they were entitled to victory, and felt robbed when Hillary Clinton lost; Hanson has claimed that this shitstorm would be raging even if some other Republican had won the presidency—say, a President Ted Cruz. To some degree he is probably correct, at least with regard to the Democrats. But I think the true explanation runs much deeper that that.

There can be no doubt that Trump won the US presidency in a phenomenal upset victory. I remember the Huffington Post smugly gave him a 1.7% chance of victory on the morning of election day. Hillary even won the popular vote, possibly even if one discounts dead voters, illegal alien voters, and people who voted multiple times. Pretty obviously, the Democrats had the rug pulled out from under them; although I think they’d be only very slightly less hysterical now if Trump had won by a landslide. And considering that a Republican won, and furthermore a person who is doing more to further a conservative agenda than any Republican president in many decades, the Republican ruling elite, or “GOPe,” shouldn’t be upset at all…but they certainly are. Some of them are even in utter despair, and encouraging the masses to vote against the Republican Party.

The situation, as I see it, is this: First, the political left did consider themselves to be entitled to the US presidency. For that matter, they felt that they had already won the culture war, that Obama was the shape of things to come, and that Clinton would essentially be performing a kind of mopping up operation. The left had gained control of the educational system, the mainstream media, and, essentially, popular American culture, and were smug in their perceived victory. Even the Republicans, the neocons at least, had conceded defeat—many Republican pundits had publicly admitted that conservative values, largely Christian values, had lost; and it seems fairly evident to me that the neocons had already effectively sold out to the Democrats in exchange for their piece of the new globalist pie. The brahmins controlling the Republican Party, dismissing the concerns of the average Republican voter, were willing to abandon conservative values and consent to “managed decline” in exchange for, say, cheap labor in the form of illegal immigration and high stock dividends derived from a global market. The Democrats and the Republicans, the leaders that is, had similar enough goals that they had pretty much coalesced into what is sometimes called the Uniparty—it became almost irrelevant who won a presidential election, and the rich donors donated to both sides indiscriminately. Voting for US President had become not so different from choosing between Coke and Pepsi.

But beneath the surface a larger and larger mass of people were getting fed up with the government’s seeming disregard for the concerns of the average citizen. They were also getting thoroughly fed up with the self-righteous intolerance of the PC thought police, to whom the Republican elites had already long since surrendered. And so—not only in America, but throughout the western world—the common citizen began rising up in defiance of a New World Order that saw him or her as of little importance, merely someone to be kept under control with handouts and propaganda while the elite reorganized civilization along lines convenient for themselves but thoroughly dystopian for those in the middle.

Trump is more a symptom that a cause of this people’s rebellion, although of course he’s a very important manifestation of it. In all likelihood it will continue without him. But in America at least, he is the face of this revolt against a globalist deconstruction of western traditions and their replacement with what is essentially neo-Marxism. He is, at present, the tip of the spear. 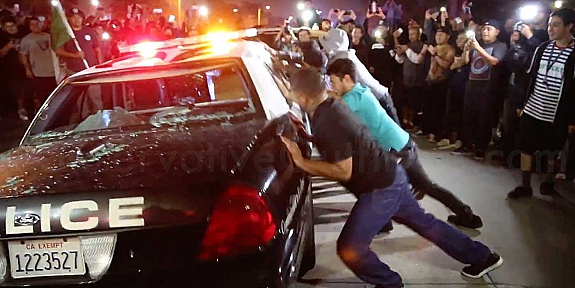 The left, and their neocon quislings, felt that they had already won, and, in their self-righteousness, that they deserved to win. The death of the Republican Party and a virtual one-party Democratic USA had been predicted by smug leftist pundits, and probably a few despairing rightist ones…and then this happened. A shark businessman who also happened to love his country and deplore what was happening to it perpetrated a hostile takeover of the Republican Party, and gave the finger to a corrupt Establishment. Victory was snatched away from them like a thunderbolt, and now it appears more likely that the Democratic Party is the one in danger of collapse.

So, what does the political left in America do in this crisis? Does it learn to be more careful, and more moderate, and to consider the plight of the average American? Hell no! Instead, the Democrats have doubled down in their attempts to overthrow established tradition and replace it with globalized socialism. Rather than learn from their mistakes, they see the situation as all or nothing (which it may really be), and so they intensify their efforts to retain control of the mind of America and become even more radical. Now, as Europeans are learning the hard way the obvious fact that a borderless socialized state is a guaranteed fiasco, the Democrats in America double down in their insistence that enforcement of immigration laws must be abolished and that the benefits of a welfare state must be increased and available to all undocumented migrants. They howl and rage against the President of the United States, demanding his impeachment even without crimes, because he is not only an outsider to the Uniparty ruling elite, he is dismantling the gains made over several decades to establish the Brave New World—a Brave New World that was considered to be already within reach, practically at hand. The propagandists of the leftist media have almost stopped pretending to be conscientious journalists in their daily, over-the-top hysterical denunciations of a President who is leading his country to prosperity, wealth, and pre-eminence; and insist that he is a criminal—based upon the “findings” of an attempted coup d’état, involving the highest levels of Mr. Obama’s administration, that is itself manifestly illegal. And the fact that the tip of the spear thrust against them is deemed by them to be a vulgar buffoon makes it all the more insufferable. 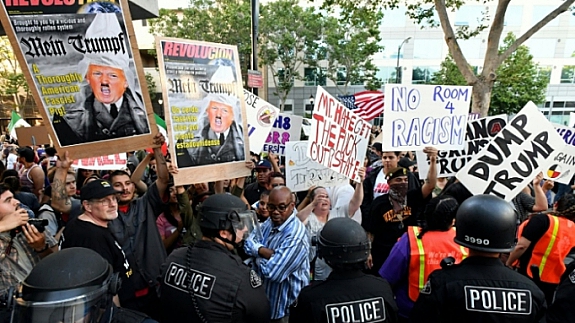 The leaders of the left can sense that we are in the midst of a political death struggle—that is no exaggeration—and that the tide has turned, and that they may very well be losing. Their constant implications that Trumpism is Armageddon is not so far from the truth as far as their globalist agenda is concerned. The upcoming midterm elections are going to be extremely important for the future of the USA, and also damned interesting.

So the main reason for all the raging, butt-hurt hysteria in the United States over the past two years is that the ruling elite, especially on the left, considered their attempts to refashion the western world to be almost accomplished—and then not only was it snatched from their grasp, and by a crude businessman outsider at that, but now it looks like all might indeed be lost. They are desperate and afraid, and still capable of whipping up the more gullible and sheeplike into a frenzy, claiming that the loss of their power is threatening the end of the world. And unfortunately, roughly half the population still actually believes them. The fight isn’t over yet, but I can say this: If the social globalists are able to win in the end, mainly by herding gullible masses of voters like sheep, then western civilization will get exactly what it deserves, and it won’t be pretty. Cyberpunk dystopia, organized PC thought police, and western Islamist ghetto-nations here we come. 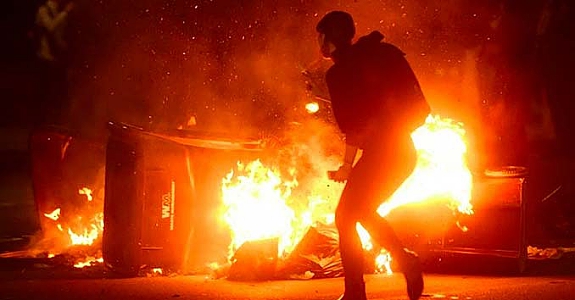