As the Proto-Indo-Europeans became dairymen, they should have come to rely more and more on their cattle and less on grain farming. As that happened, they would have become mobile, which is a military advantage, especially against farmers. Farmers have homes and villages that they must defend, whereas pastoralists can fight at a time and place of their choosing. Herodotus tells us how Darius, the head of the Persian Empire, decided to invade the Russian grasslands in 512 BC, then held by the Scythians. Scythians were a people whose way of life was probably similar to that of the Proto-Indo-Europeans, but further developed in that they had fully mastered the horse. They appear to have been milk drinkers early on: In fact, this is mentioned in the Iliad.

Well, shit. Those of you who read this blog more or less regularly may recall that a few weeks ago I posted a three-part series of articles entitled “White Ethnic Pride: The Indo-European ‘Aryan’ Race”; and in the white-knuckled climactic third part I tried to explain how and why the ancient Indo-Europeans were able to conquer so much of the world, and dominate so much of the human culture of this planet. After all, almost half the people in the world now speak a language derived from those ancient Aryans (using the Nazi term loosely, as a shorter synonym for “Indo-Europeans”), and the global technological culture we enjoy is derived primarily from those ancient conquerors’ descendants. My theory was that the Aryans were so phenomenally successful for three main reasons: they were large, strong, and aggressive; they were some of the first people to ride horses, which gave them a devastating military advantage when invading a new territory; and they spoke a powerful, relatively sophisticated language which allowed them to think thoughts that were more difficult to think, and have creative ideas more difficult to have, with more limited symbolic systems. And now the trouble is that I’m currently reading a book which claims that the reason the Indo-Europeans have dominated most of the earth’s surface is simply because they were lactose-tolerant. It kind of sucks actually.

The book, by the way, is The 10,000 Year Explosion: How Civilization Accelerated Human Evolution, by Gregory Cochran and Henry Harpending (Basic Books 2009). It is a rather interesting genetic history of modern humans, emphasizing how agriculture, and the higher population densities and more complex political systems that inevitably arose from it, caused a phenomenal acceleration of evolutionary adaptations in Eurasians in particular. Thus the book is unabashedly politically incorrect, as it accepts as obvious fact that we humans have evolved differently to fit into different environments in different parts of the world, and we just are not all the same. The great acceleration in evolutionary change in us humans, discussed in the book, occurred mainly with Eurasians who adapted to life in the temperate zone, and then to life as relatively civilized agriculturalists. The different evolutionary adaptations of different ethnicities are really obvious to anyone who investigates the issue and is not blinded by PC hysteria, or by some other ideology considered more important than empirical objectivity.

For example (indulging in a digression here), the authors point out that Eurasians, after developing agriculture and living at relatively high population densities, had to evolve better immune systems to defend themselves against contagious diseases. On the other hand, most of the aboriginal peoples of the American continents actually were evolving weaker immune systems, since mostly they were sparsely settled as stone-age hunter-gatherers with little danger of contagion, and thus a weaker immune system had survival value because it lessened the danger of autoimmune disorders like multiple sclerosis. Then along came European explorers and settlers into the “New World,” bringing a whole slew of diseases that killed off the native Americans like proverbial flies. It is estimated that more than 90% of the native populations in the western hemisphere were killed off by such plagues as smallpox, tuberculosis, and measles—not by cowboys and the US Cavalry. This of course cleared the way for small numbers of settlers armed with muskets to take over most of the new territory; often a tribe of Indians would be staggered by some epidemic pestilence when the palefaces would swoop in with their horses and guns and iron implements.

Anyway, the authors, I repeat, claim that the Indo-European “Aryan” race was the first major group of people to develop an allele which caused adults to retain the ability to digest milk. Any normal person has the ability as a small child, but most humans lose the ability to metabolize lactose, or milk sugar, after they are weaned. When I first read this it seemed rather far-fetched to assume that the mere ability of adults of a certain ethnicity to drink milk could have been such an overwhelming advantage as to allow world domination, but their argument turns out to be plausible.

The thing is, dairy cattle produce several times as many calories per unit of land as do beef cattle. Thus early Aryan pastoralists could populate their land more densely than their lactose-intolerant beef-eating barbarian neighbors. And thus with higher population density the Aryans could muster greater hordes of warriors. Furthermore, as the authors point out, although the non-Aryans could quickly learn how to ride horses and make better weapons and develop better military strategies, they simply could not develop the ability to digest milk as adults. The Aryans had a genetic advantage that could not be imitated, much as sub-Saharan Africans had genetic resistance to tropical diseases like malaria that caused early European colonialists to be the ones to die like the proverbial flies.

So lactose tolerance could easily explain in large part how the Aryan race could spread throughout the steppes of Ukraine and southwestern Russia as quickly as they did. The authors then point out that in northern Europe especially, where ancient strains of wheat and barley didn’t grow so well, herding of dairy cattle may have been competitive with bronze-age sedentary agriculture. Also they observe that milk-drinking barbarian marauders would tend to be larger and stronger than wheat farmers anyway, considering that early agriculture produced humans who lived, most of them, chronically on the verge of severe malnutrition.

Put it all together and it does seem plausible, at least, that lactose tolerance possessed almost uniquely by the people of one aggressive tribe could have been the deciding factor that put them over the top and allowed them the numbers and the power to dominate all other tribes around them. The only civilizations that were able to withstand the Bronze-Age Indo-Europeans were people living in relatively inaccessible regions like mountains (like the Basques), and those civilizations in Asia which had already developed powerful kingdoms, with well-equipped armies and fortified cities.

On the other hand, Cochran and Harpending have adopted an interpretation of human civilization that is virtually the exact opposite of that adopted by most social scientists: they seem pleased as Punch to attribute pretty much everything to DNA and alleles. In fact reading their book is a little humiliating as one sees pretty much the entire human condition described in terms of random genetic mutations granting survival value to their possessors. Even the fact that we humans have become more “civilized” and less barbarously violent over the millennia is attributed by them, to a great degree, to the idea that after agriculture turned us into relatively sedentary town-dwellers and we adopted governments to protect us, we evolved along the same lines as domesticated animals—although in our case it wasn’t some farmer who owned us but some warlord or god-king. As is still the case today, those who don’t please the government may tragically fall by the wayside and fail to reproduce their alleles; and governments have always preferred docile obedience to a fierce love of liberty. I would like to have enough faith in the human race to assume that much of what makes us what we are, including sometimes even greatness, involves inspiration and creativity and the power of ideas. I’m sure Cochran and Harpending wouldn’t deny this, but their speciality appears to lie in genetics, and they have a passion for seeing the human race through DNA-colored glasses. They see our DNA as the blueprint for the machine that generates the ideas that make a culture vigorous and successful.

Bearing all this in mind, I am willing to accept the notion that lactose tolerance helped the Aryan race, especially in ancient times, to conquer so much of the world. It does make sense, if only because milk-drinking barbarians would be nourished by a more nutritious diet than their wheat-eating enemies, helping them to be bigger and stronger. But I still stand by the conclusion of my earlier essay. In addition to lactose tolerance and the more aggressive, more adventurous attitudes of nomadic pastoralists over village-dwelling farmers, the ancient Aryans still had the devastating military advantage of cavalry long before their enemies did—and the very first battle may have proved decisive on many occasions, not allowing the non-Aryans to adapt and develop their own equestrian skills. And still, perhaps most important of all, the Aryans had a powerful, flexible language that permitted their creativity to become manifested as ideas, as words, and finally as the cultural and technological innovations that have changed the face of the earth.

So yeah, even though the glory of my ancestry is probably enhanced by some neolithic ancestor having a mutation that allowed her to digest milk as an adult, giving her descendants the ability to bear more children, I am still glad that I have Indo-European blood in my veins. They were, and still are, a great people. And I’m lactose tolerant as hell. 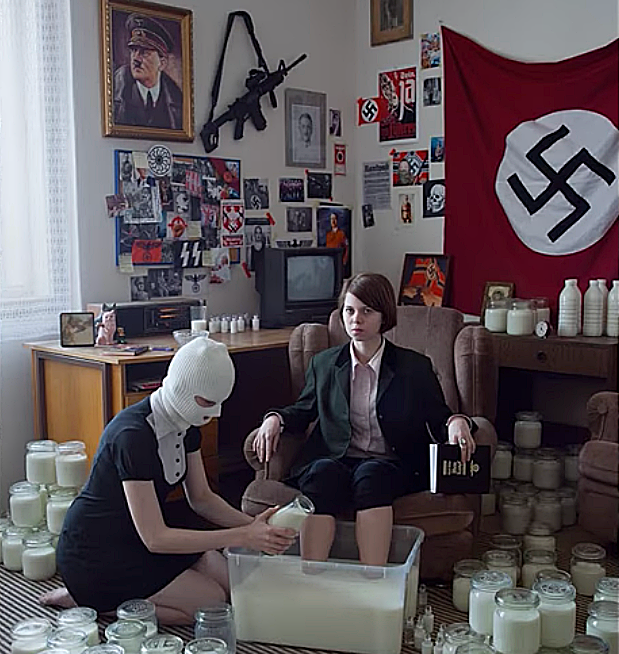 P.S. This is a video by one of my favorite YouTubers, Chris Ray Gun. It’s more than a year old, but still it discusses the important topic of milk-drinking white supremacists, and is well worth watching. And it even features a cameo appearance by Ricky Berwick. Cheers.