The Biological Logic of Racism and Xenophobia (1: Superficial Reasons)


The tendencies of members to unite against an outside tribe and the ability to act violently and prejudicially against that outside tribe likely boosted the chances of survival in genocidal conflicts. "Tribalism" is in some sense an inescapable fact of human neurology simply because many human brains are not adapted to working with large populations. Once a person's limit for connection is reached, the human brain must resort to some combination of hierarchical schemes, stereotypes and other simplified models to understand so many people. —Wikipedia, "Tribalism"

Racism is a common phenomenon in the human species, particularly if one sets aside cultural Marxist redefinitions of the term. In the discussion that follows, the term “racism” will be defined the old-fashioned way as prejudice or bigotry in favor of one’s own ethnicity and against other ethnicities—and going with this definition it is very clear that white people hold no monopoly on it. The genocide of Tutsis by Hutus in Rwanda in the 1990s; the current persecution of whites in South Africa by blacks out for revenge; Japanese residents’ dislike of foreigners living in their apartment buildings in Tokyo; friction between various nationalities in Central America and Mexico—these are relatively well known examples of ethnicity-oriented prejudice and antagonism coming from people not prdominantly of European ancestry. So, as mentioned in the first sentence above, racial prejudice is practically universal and found throughout the world.

Racism is itself based on a broader phenomenon called xenophobia, the distrust or dislike of strangers or outsiders—again ignoring cultural Marxists’ attempts at redefining terms to direct all blame for societal evils exclusively toward the outgroup of white males. Xenophobia is universal not only throughout the human species but throughout the animal kingdom in species intelligent enough to have the potential to be xenophobes. A very primitive, elemental form of it can be found in ants: when two ants meet the first thing they do is to taste each other with their antennae; if they are sisters from the same colony, then well and good and they go on their way. But if they are not of the same “tribe,” they instantaneously engage in a battle to the death, or else one of them immediately flees for its life. One xenophobic consideration is that since some amount of xenophobia is universal throughout the human species, there is obviously a very high likelihood that if group A is xenophobic against group B, then group B is going to have some xenophobic sentiment toward group A as well.

A variation on racist and xenophobic tendencies is tribalism, which is a relatively adjustable, more culturally conditioned manifestation of xenophobic social instincts. Dr. Steve Turley gave a good example of this in one of his YouTube videos, with regard to his childhood (and clearly the childhood of countless hundreds of millions of others). He said that he and his brother often didn’t get along, and spent much of their time as though hating each other…until their cousins came over for a visit, in which case he and his brother would unify as a family unit with the cousins viewed as the “other.” But if they were playing outside and some neighbor kids would intrude, the brothers and the cousins would immediately forget their rivalries and unify as a family or tribe with the neighbors as the new “other.” But then if a gang of kids from some other outside neighborhood were to invade the shared territory of the first kids, then again, all rivalries and animosities would be put away as “our” neighborhood stood together and faced the invaders. This sort of behavior is an aspect of fundamental human nature and is built right into us. We are born with it much as birds are born knowing to fear hawks or snakes.

The fact is that xenophobia, tribalism, and, when applicable, racism too, have been common to our ancestors going back well into prehuman times; and as already observed, xenophobia to some degree or another is common to pretty much any species of animal with sufficient intelligence to have a capacity for it. Tribalism, being more culturally conditioned, is presumably less common in the animal kingdom, but it is clearly common in the mammalian order of Primates. Chimpanzees for example regularly engage in intertribal warfare, sometimes fighting to the death. We can try to overcome xenophobic tendencies in ourselves; we can condition ourselves to act otherwise to some degree; but xenophobia is built into animals, including human animals, as subliminal instinct. And fighting against our own inherent nature is rarely very successful—especially if the very existence of inherent human nature is ignored or explicitly rejected for ideological reasons.

Furthermore—and this is the kicker—we wouldn’t have xenophobic instincts if they hadn’t helped our ancestors to survive and reproduce, to “be fruitful and multiply.” Tribalism, for example, helps to hold a social group together and make it cooperative and thereby stronger than some casual, passive assemblage of individuals, let alone a group of mutually antagonistic ones. Not only did xenophobia have survival value for our distant ancestors, it has survival value still, and is unlikely to fade out or be abolished by decree anytime soon.

There are obvious survival benefits to xenophobia in the widest sense of fear or distrust of the unknown or unfamiliar. A fussiness about food we’ve never eaten before (like squeamishness about eating insects in the west) definitely kept many of our ancestors alive when confronted with berries or mushrooms that looked edible but actually weren’t. Children’s fear of the dark no doubt kept stone-age cave children near the fire at night, and away from the wolves or leopards or hyenas prowling around the camp. I suppose a similar atavistic, xenophobic trait in children could be the common fear of hanging an arm or leg over the edge of the bed, for fear of monsters or big spiders or whatever lurking beneath it.

With regard to the more limited form of xenophobic distrust of unknown or unfamiliar humans, there have always been obvious reasons for that too. I have read that after we humans invented agriculture the primary cause of death among us was disease; but before that, during our very long hunter-gatherer phase, mortality was caused primarily by intertribal warfare. This remains true in some “primitive” civilizations to this day: for example wandering alone into the territory of a tribe not one’s own in the highlands of New Guinea can easily spell violent death. The same fate occurred to a young Christian missionary not so long ago on a small island in the Indian Ocean inhabited by xenophobic stone-age natives. For that matter, violence of a similar nature occurs daily when some outsider in a concrete jungle strays onto the territory of a gang not his own, or a non-Muslim (or Muslim of a different sect or nationality) enters a so-called no-go zone in Malmö, or Paris, or London.

Some eminently reasonable xenophobia is taught to small children by any conscientious parent, possibly more lately than previously—don’t trust strangers. Don’t accept candy from them. Don’t get into a car with them, no matter how friendly they seem to be. A certain amount of xenophobia simply makes sense with regard to survival. It has for literally millions of years, and no doubt has been bred into us as a basic aspect of inherent human nature. This applies not only to a distrust of strangers but to a trust of those familiar to us. People continue to survive in part by avoiding the unknown, and those foolhardy or extremely friendly ones who trust everyone often fail to pass on their traits to their offspring because they die before having any. Again, it’s built in because it has survival value, and it’s damned unlikely that it’s going to be bred out of us anytime soon, if ever. 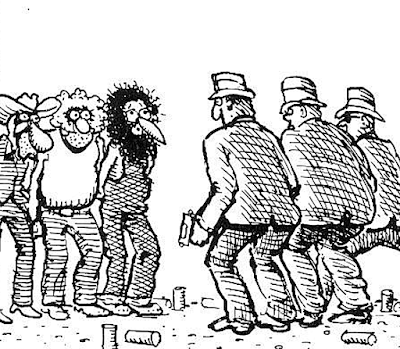