Am I the Only Non-Leftist Western Bhikkhu?


…a free intelligence, a type hated by all the smelly little orthodoxies which are now contending for our souls.  —George Orwell

Oddly enough, I have been accused, by more than one person lately, of being the only “conservative” or “rightist” western Theravada Buddhist monk in the western hemisphere. The situation is so extreme that some apparently even consider me to be some kind of great white hope for western Buddhism. Although it may seem that way—me being the only non-leftist western monk that is—I rather doubt it. (Well, I’m skeptical of that great white hope part too.) I certainly hope that I’m not the only one, and I figure I probably am not.

First of all, it must still be true that many westerners who renounce worldly life and enter the Sangha are thoroughly fed up, even appalled, by the spiritual bankruptcy of secular liberal western society. And considering that lately the situation is much worse than it was when I opted out, degenerating into a kind of depraved clown show in many respects, I would guess that there are at least a few “anti-SJW” monks out there somewhere. However, a monk is supposed to renounce worldliness, really renounce it, which includes secular politics. Buddhism, and especially Buddhist monasticism, is supposed to be apolitical. So the right-wing western monastics may be sitting around in plain sight without people realizing that they consider political correctness, for example, to be a disease, and a major reason why they became monks in the first place.

It is true, though, that the more conservative and tougher-minded individuals are more likely to head for the forests of tropical Asia than to cater to (or wallow in) soft, luxurious PC progressivism in the west. So assuming that there really are conservative or politically right-wing western bhikkhus, most of them may be wrestling with the devil in the wilderness, in the fashion of macho spiritualists, and simply off the radar. But then again, they wouldn’t count anyhow because they’re not in the western hemisphere. But even so there must be some western monks, besides me I mean, who can see plainly enough that western Buddhism has been hijacked by cultural Marxism to the point of rejecting actual Dhamma in favor of political correctness—sermons on white privilege, special retreats for “marginalized” victim groups, avoiding any mention of traditional Buddhist attitudes towards women or abortion, pandering to hypersensitive feelings rather than emphasizing the Second Noble Truth, etc.

Certainly there are plenty of conservative Asian monks in the west as well as in the east, so we can rule out the possibility that Dhamma itself is inherently ultraliberal and politically correct by postmodern western standards. There are probably more non-PC conservative monks than cultural Marxist ones if we consider the entire Sangha of the Four Quarters, including all the native-born Asians. This also suggests that there should be some conservative western monks (conservative by temperament and outlook, if not by their espoused politics, which they may not even have), even in the land of IMS, Spirit Rock, and Tricycle magazine.

It may be that some, maybe most, of our hypothetical conservative western monks just keep to themselves and keep their head down when surrounded by the ultraliberal elitists who tend to call themselves Buddhist in the west. They may be somewhat like conservative employees at Google who avoid trouble through a little polite hypocrisy if they can’t simply avoid interacting with SJWs. I’ve been there myself, and I can relate to the urge to keep one’s mouth shut for the sake of not offending good-hearted but soft-headed people. (I really am less obnoxious in person than I am when writing, as a face to face interaction provides instant empathic feedback, and I’m not simply launching abstract words into a void.) Seriously, considering the neo-Marxism of the Starbucks socialist elitists who mostly call themselves Buddhist in the west (many of whom would recoil in aversion from actual Dhamma, considering that what many of them identify as such is essentially feminized political correctness with a small amount of Buddhist flavoring added), a bit of tactical hypocrisy may be far preferable, especially if monks are Buddhist “missionaries,” to being disinvited, deplatformed, and generally shunned by the majority of white lay supporters. 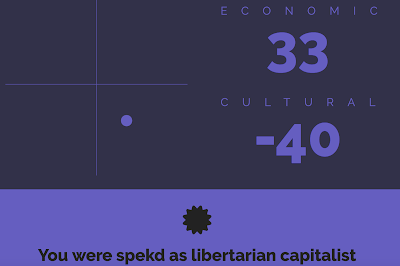 Also, even conservative monks may have plenty of mettā, and may adopt the philosophical attitude of seeing the best in people, wishing them well, and getting along with them as best they can—which, if they really are compassionate sorts, may effectively silence them with regard to sharing their less politically correct side. One thing I do know is that monks can speak and act radically differently when alone together than when they’re interacting with laypeople in public. So there’s that, too.

Next there is the totally different question of whether I am in fact a right-winger, let alone the only one in the western Sangha. I’ve taken a few tests on the Internet to determine my political disposition, out of curiosity, and I tend to wind up somewhere towards the middle—which after all is appropriate for a Buddhist, taking the Middle Way between extremes and all that. Politicalcompass.org in particular had me slightly to the left of center a few years ago, placing me closest to Nelson Mandela of all people on its big chart; and more recently it placed me farther still towards the left, much farther left than, say, Barack Obama. I find that concerning. On the other hand, spekr.org placed me well to the right, although still closer to the center than to the extreme, “far” right. Another test whose name I don’t recall simply declared that I am a “moderate conservative.” So I’m not nearly the extremist that some, both on the right and the left, might consider me to be. I consider myself to be more or less of a classical liberal, rather along the lines of J. S. Mill. Then again, classical liberals are often referred to as “Nazis” or “hard right” by people who have moved so far to the left that even centrism seems extreme to them. If Jordan Peterson and Sargon of Akkad can be called Nazis, then so can I. 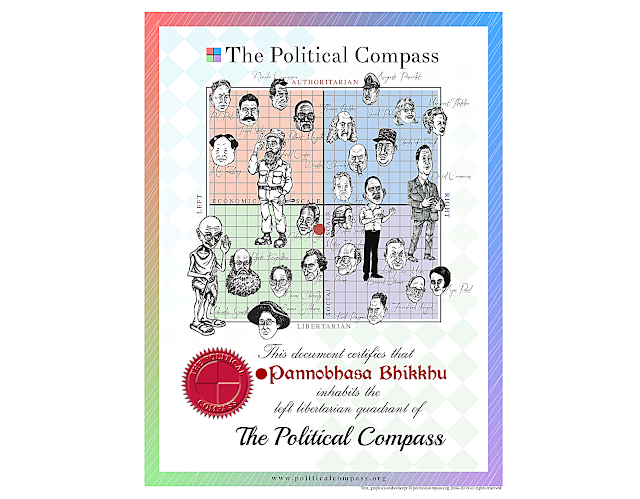 (We may as well set aside the idea that Adolf Hitler and the movement that he led to prominence, so to speak, were not really “far right” either. Hitler didn’t give a damn about economics and made use of anything that looked like it would be useful. I would be inclined to consider Hitler a “radical centrist” overall, with both rightist and leftist characteristics. So maybe I am a Nazi after all. Ha. But let’s move on.)

Overall, I consider the constitutional republican system set up by America’s founding fathers, white patriarchal slave owners that they were (though a few like John Adams never owned a slave), to be the wisest and best political system thus far devised and tested, and infinitely superior to the cultural Marxist Brave New World that the new leftists are hysterically demanding lately. Personally I consider the likes of John Adams and even Thomas Jefferson to be farther to the (libertarian) right than Adolf Hitler, so it could be that I am more of a rightist, though less of a Nazi, than otherwise. Part of the confusion stems from the confoundment which reigns over the whole question of, “What exactly is the far right anyway?” That is an issue that I have considered in a previous post.

It may be that what really sets me apart from most Buddhists and also from most Buddhist monks in the west is not rightist politics but rather an insistence on freedom, especially freedom of thought and expression—even a certain aversion for following along sheeplike with the majority, pretty much any majority. Although western monks in general are nonconformist enough to abandon western culture for an essentially Asian one, most of them do seem pretty conformist with regard to their monastic tradition, especially those ordained in a Thai tradition, as the Thais are more oriented towards mandatory group conformity than are, say, the Burmese. (The Burmese are conformist too, although it comes so naturally to them that they rarely turn it into an explicit policy.) But the new left seems absolutely intolerant of ideological diversity, which they try to shut down with censorship, vilification, and name-calling, as they generally lack the wherewithal to debate issues reasonably, or else they are so divorced from a classical liberal point of view that there simply is insufficient common ground upon which to base a discussion.

It may be that most western monastics in the west feel a greater need for togetherness than for individual liberty. The tough-minded loners, like the more conservative monks already mentioned, are more likely to head for the forests of tropical Asia, preferring to contend with strange cultures, diarrhea, and exotic diseases rather than with western political correctness hysteria masquerading as Dhamma.

Anyhow, if anyone knows of other “Nazi” bhikkhus in the west, please let the rest of us know of their whereabouts. Frankly, I can’t think of a single one that I’m sure of, although I have my suspicions with regard to a few. 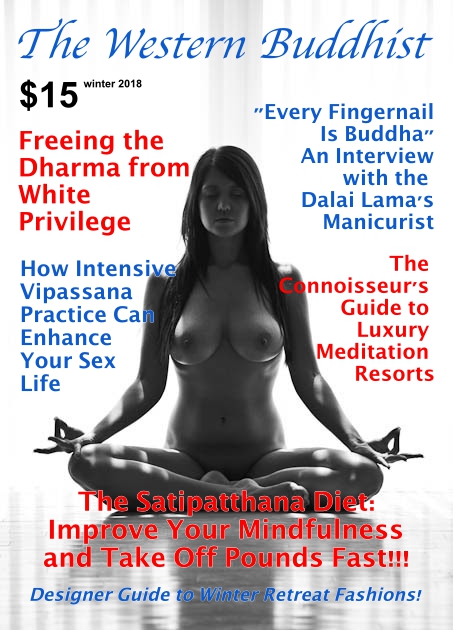