You can only be young once. But you can always be immature. —Dave Barry

Anyone who watches the news will know that there is a kind of societal upheaval going on throughout much of the western world. (It’s going on throughout much of the democratic, westernized parts of the eastern world too, although most people who watch the news may not have noticed much of that.) What most people who watch the news don’t realize, though, is that the current upheaval is the culmination of a century or more of patient planning by the left. The political, economic, and cultural left have arrived at a sort of endgame, they’re making their big move to seize power—but they have gone about it so blatantly lately that it has triggered a massive pushback, mostly by the common people. Hence the upheaval. What we’ve got going is a kind of peasants’ revolt against an arrogant elite who have shown their hand and can no longer keep it a secret that they despise peasants, and are even willing to replace them with imported ones who presumably will be easier to keep under control.

One of the early movements that have resulted in this endgame is known as the Frankfurt School. This was a group of European Jewish Marxist intellectuals who realized that the working class in the west was too prosperous and comfortable to rise up against the Capitalists in a glorious workers’ revolution, and they also had enough sense to realize that Stalinism wasn’t working out so well, and so they began a long game of undermining capitalist society by an alternative route to that taken by the Russian Bolsheviks. Instead of simply mobilizing the workers and attacking the bourgeoisie in accordance with Marxism 1.0, the neo-Marxists began attacking pretty much every aspect of western civilization, wielding an intellectual (or at least pseudo-intellectual) weapon called Critical Theory. The eventual upshot of this is that the bourgeoisie were replaced as the common enemy by white men in general, and most of what white men have stood for for the past few hundred years. Now instead of the working class oppressed by the evil Capitalist bosses, it has become mostly urban elites and the welfare class oppressed by patriarchal white devils, who, along with their families, compose most of the working class.

Neo-Marxism, alias Cultural Marxism, Social Justice, etc., has pervaded western culture, largely because radical leftists and their sympathizers, as part of their long, patient plan, gained control of academia and the mass media, which were employed for purposes of subtle indoctrination and propaganda, which in turn eased the minds of the populace of the west towards increasingly radical leftist beliefs—for example the notion that maleness and femaleness are interchangeable, that sexual aberrations are actually superior to straight heterosexuality, that women (however they are defined) should resent men and see them as the enemy, or at best as the traditional oppressor, that masculinity is toxic, and that western societies should welcome with open arms the mass immigration of people of different races and cultures, many of whom are antagonistic to western values and have little or no intention of assimilating. As I say, this project has been a very patient, methodical one, and has been many decades in the making.

Now the patient preparations are apparently over, and the endgame is upon us…and it is clearly faltering. This is not the case only in the USA, but has become manifest in the UK also, in a spectacular electoral train wreck by the socialist Labour Party and the “woke” Liberal Democrats. The pushback against ultraliberal globalism is occurring elsewhere as well—Australia, Italy, Eastern Europe, Brazil, India—and to a some degree pretty much everywhere else in the west. So the radical far left, influencing the left in general, have lost their patience and are making a momentous lunge in the form of an attempted power grab, because they see that their agenda is going awry, and so it’s now or maybe never. The matter has come to a head to the point that all the snakelike subtlety of cultural Marxists has been cast aside, causing the “normies” of the populace (i.e. the majority) to finally notice what’s going on, at long last, and they are increasingly appalled by what they see.

Part of the problem is that the indoctrination and propaganda already mentioned, the tools for guiding the masses, plus the negative effects of destabilizing traditional culture, have worked too well on indoctrinated leftist radicals. Many ultraliberal activists seem to have adult bodies but the emotional maturity of toddlers—they no longer have the maturity and self-restraint to accept delayed gratification but must have their way now now NOW. This results not only in mass hysteria but in foolishly reckless behavior that favors their opponents and undermines their own cause. The actions of the radical left, in their attempts to utterly transform western civilization into a kind of politically correct Brave New World, have become so blatant and hysterical that people are waking up in droves and pushing back towards soil, blood, and tradition, if only the tradition of classical liberalism, and at any rate back towards what has obviously worked pretty well in the not so distant past. The left, characteristically, have responded to this pushback by doubling down in their efforts and by sneering at and belligerently insulting the people who have had enough of the irrationality, immaturity, and hostile intolerance.

The indoctrinated left have degenerated to the point that they are no longer willing or able to accept democracy as a political institution. Democracy, in order for it to work, requires the losing side to accept the results of elections. It’s rather like the ideal of sportsmanship in sports: If the losing side reacts to their loss by refusing to admit that they lost in a more or less fair competition, and by screaming and howling and trashing the stadium, insisting that the other team are cheaters and downright evil, then the very idea of genuine athletic competition is lost. In democratic politics the losing side of an election is expected to accept that they lost, and presumably to figure out what went wrong and how they can rectify it next time; not to declare the result invalid and spend their time trying to overthrow the system, or to rig it in their own favor.

The obvious golden example of this is the impeachment of President Donald Trump in America. The left were howling in the streets in protest of his electoral victory in 2016, and Democrat members of Congress began demanding his impeachment practically from the very beginning, not even caring all that much what the grounds for impeachment would be—just hating his guts was apparently good enough. The current Ukraine pseudoscandal is just the latest of many attempts to overthrow the President. Nancy Pelosi, Speaker of the House of Representatives and effective leader of the Democratic Party, had enough sense to know that impeaching him for purely partisan and emotional reasons wasn’t going to be a winner except among the more hysterical of Democrats, and would likely be unsuccessful overall; but the radicals in her own Party were vehement in their wild-eyed insistence on Trump’s impeachment by any means necessary, and, although constituting a relatively small percentage of Democrats, they were too numerous and influential to ignore. The Democrats can’t win without them. So, reluctantly I presume, Pelosi broke her own word (of insisting that any impeachment effort would have to be bipartisan and based on clear evidence of high crimes and misdemeanors) and gave in to the demands of the socialist left, hoping that media hype would get enough Americans on board with it. The obvious bad faith and hysterical partisan bias of the impeachment process is pretty damned obvious to all but the most indoctrinated and propagandized, and could very well lead to the same sort of fiasco as the Labour Party’s recent debacle in the UK. But they can’t help it because the left have lost patience, and maybe even the emotional capacity for patience.

Western neo-Marxists and globalists have indeed been extremely patient in the past, but now they have lurched out into the open, in broad daylight, and are compelled to make ever bolder, ever more reckless and desperate moves, because anti-Marxist nationalists have begun to push back hard, even to the point of electing a loud, vulgar business shark and reality TV host to be the “America First” President of the USA. The rage against Trump and the rage against Brexit, encouraged by the corporate globalist media, are obvious signs that things are not going well for the left and the globalist agenda, and the people who rage are just doubling down in their vehemence and in their childish impatience. This really is the endgame of an attempt to overthrow traditional western civilization, a kind of civil revolution. That is not an exaggeration. And for the radical left it may be all or nothing, at least for the next few decades. Thus the desperation.

The resistance, or rebellion, the People’s Revolt of the 21st century, has begun in earnest, and the new left has found itself in ruins in Britain after idiotically turning against the common people. A similar predicament looms in the USA, where self-righteous neo-Marxist elitists, bribing the welfare class with offers of free handouts and the punishment of their enemies, have adopted the manifestly questionable, juvenile strategy of sneering with hostile contempt at the (predominantly white) working class. Ironically, the radical left have not merely turned away from the working-class proletariat but have positively turned against them.

But wait, there’s more: The American left’s desperation increases because hardly a one of their proposed policies enjoys as much as 51% approval by the American populace. (This is another reason why they want Trump overthrown: They know that their leaders and policies are unpopular.) Unlimited immigration, enforced acceptance of practically every kind of sexual deviance, nationalized medicine (including free healthcare for illegal aliens), attacks on traditional Christian values, demonization of the white race, bashing American history and America in general, abolishing the Second Amendment and disarming the populace, hamstringing the economy through radical green activism, outsourcing industry to places like Communist China, and of course political correctness hysteria as a whole, are not winning causes. And some, like establishing a borderless welfare state, practically necessitate irrationality bordering on insanity. But then again, sanity may be viewed as a tool of white patriarchal oppression. 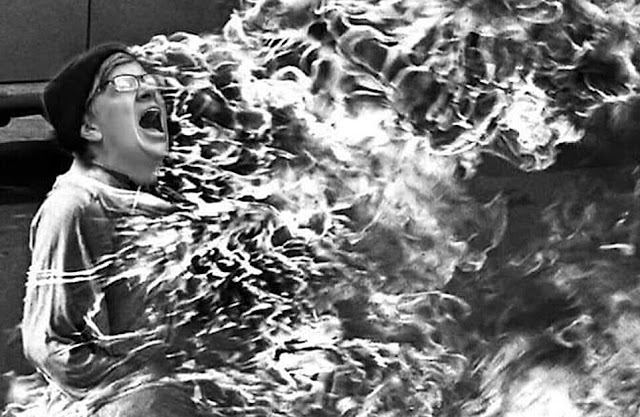