The New Left’s War with Christianity—and Ultimately with Islam


Verily, you practice your lusts on men instead of women. Nay, but you are a people transgressing beyond bounds. —Quran 7:81

Go you in unto the males of the race of men, and leave those whom Allah has created for you to be your wives? Nay, you are a trespassing people! —Quran 26:165-6

OK, so I’m a Buddhist monk who wants to write about western monotheism. At least it is a religion-oriented topic, in some cases even a spirituality-oriented one, unlike my previous post on pornographic computer games.

As you all know, a vast, nebulous ideology known as cultural Marxism is threatening to replace traditional cultures and scientific empiricism as the new paradigm for understanding what’s what in western civilization. Although the blatantly Marxist part of it is usually played down for propaganda reasons, for example by preferring euphemisms like Social Justice or Intersectionality or just “the left,” the old Marxist antagonism towards religion, and especially towards Christianity, is still very much alive.

This is partly because Marxism in its “purest” form is materialistic and despises religion, especially Christianity; but it is also partly because neo-Marxism is maneuvering to become in effect the next state religion. Remember that the “progressive movement” of the Roman Empire which most closely resembles today’s leftist mass hysteria is early Christianity (though as I say again and again, at least the early Christians really did occupy some sort of moral high ground); so ironically the new progressive movement sees the old one as part of the problem, something to be overthrown and supplanted.

Thus we see the new Marxists, many of whom don’t even realize that they are indoctrinated into Marxist dogma, destabilizing traditional western society in every way they can manage, including the delegitimizing and undermining of religion. Cultural Marxists have been pressuring Christians to deny their own Bible and accept the notion that sodomy isn’t sin, for example—in fact I wonder when the radical left will start demanding that the story of Sodom and Gomorrah be banned as “hate speech.” They are fanatically insistent that their own globalist, socialist ideology become the new religion of the west, or at least the new orthodoxy for explaining reality and the human condition.

Examples of leftist theophobia would certainly include the fact that many lefties in the USA loathe and fear Mike Pence, the devout Christian Vice President, even more than they hate Trump—so that one can be reasonably sure that even if their pipe dreams of impeaching and destroying Mr. Trump were successful, they’d immediately have to launch a virulent attack on the new President Pence. He’s abnormally well-behaved by postmodern standards, so the attacks would in all probability be along the lines that he is a “homophobe” who actually considers heterosexuality to be somehow superior to being gay or lesbian. The thing is, though, that pretty much all religions, not just Christianity, consider homosexuality to be immoral and/or inferior to the biological male/female symbiosis.

Another example: Now Catholic hospitals and clinics are being pressured by leftists, with a bit of hysteria even, to provide or at least facilitate abortions, despite the fact that Christianity, as well as pretty much every other major religion in the world, considers abortion to be literal murder. Another: Lately the left has even been attacking religious holidays like Christmas, to the point that saying “Merry Christmas” out loud in public is condemned as something hateful, something to be attacked and silenced. One should say “Happy Holidays” instead, so as not to offend people who are offended by Christianity. (If neo-Marxism wins the war for civilization, and it probably won’t, the gods willing, but if it does win, then Christmas will probably be repurposed, just as the early Roman Christians repurposed the pagan feast day of Sol Invictus, falling on December 25th.) Yet another example: Very recently a national chicken sandwich franchise run by a devout Christian family was pressured by leftist activist groups to stop donating funds to certain Christian charities, on the grounds that these Christian organizations, which include the Salvation Army, were anti-gay and -trans (again, Sodom and Gomorrah…). And we needn’t even mention that meanwhile in overtly Communist China, the Marxist attitude towards religion, including Islam, is demonstrated by the concentration/reeducation camps for Uighur Muslims, and the imprisonment and organ harvesting of Falun Gong practitioners.

But here’s the problem. At present these same western SJWs see Muslims as an oppressed and marginalized minority, victims of the stereotyped universal villain, Whitey; but sooner or later—in fact it’s already starting—the Muslims, who are more traditionally religious and fundamentalist in their morality than most western Christians, are going to rebel against the apparent amoral depravity endorsed by the radical feminists, militant gay and trans rights activists, global socialists, et al. In fact with multiculturalism and the left’s insistence that immigrants do not need to assimilate to the evil culture of western civilization, Muslims are encouraged by the left itself to remain traditional and relatively intolerant religious fundamentalists who view many of the “values” of the new left to be God-cursed abomination.

Which leads back to my old prophecy concerning future race wars in Europe. Ultraliberal Starbucks socialists and non-European Muslim migrants will begin as allies in a war against mostly white conservative nationalists…until the lefties realize that the ideology of Islam denounces and abhors them much more than it hates conservative Christians, who not only are People of the Book and try to serve God but actually still have moral principles extending beyond soft-headed feminized compassion. It may even be that before the inevitable race wars are over, the Muslims might even ally themselves with the European nationalistic traditional conservatives against the atheistic Brave New World. 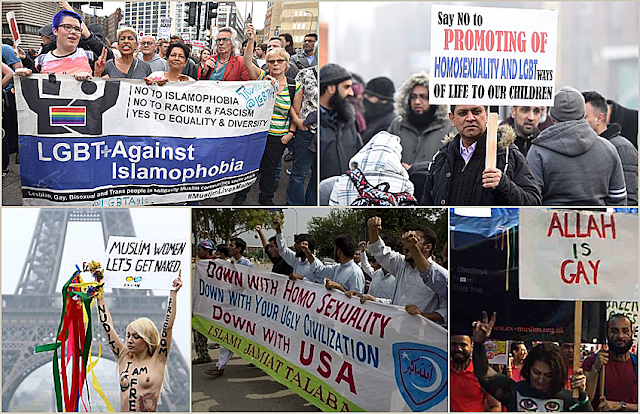