Overpopulation has been one of the many alarms raised by environmentalists over the past several decades, since long before CO2 emissions became the bogeyman used to frighten children. Overpopulation, along with nuclear Armageddon, were possibly the two earliest big environmental scares in modern times, omitting all the apocalyptic Christian stuff (Jesus is coming! The end is nigh!), followed by such specters as nuclear winter, the vanishing ozone layer, deforestation, the next ice age, and capitalism in general. But although the hazards of overpopulation are still real and valid, the fact is that worrying and ranting about it are no longer in fashion—apparently no more so than “shag” haircuts and polyester leisure suits. Now of course the vogue is to worry and rant about carbon dioxide and climate change; and fashion-conscious indoctrinated lefties in particular follow along sheeplike with whatever the cultural icons, and the Establishment in general, tell them to follow. It all comes back to overpopulation, however: most environmental problems today, including carbon emissions, wouldn’t be problems if we had only a billion people living on this planet, or at most two billion.

(I feel like digressing a little by pointing out that a major reason why people aren’t starving by the billions, as the panicky environmentalists of the 1970s were prophesying would happen by the year 2000, is that increased carbon dioxide in the atmosphere has contributed to increased crop growth and crop yields, because of course CO2 is a kind of plant food. The earth is greener now because of that. But as I say, I digress.)

One reason why I didn’t want to have children as a young man is that I love nature and studied lots of ecology (in fact if I had remained a student instead of deciding to become a monk there’s a good chance that I’d be an ecologist of some sort now); and I considered the world to be already grotesquely, obscenely overpopulated. There were other reasons in addition to that, for example I decided to become a celibate monk, I have a lifelong aversion for making “weighty” karma, which would include marrying and starting a family, the sound of screaming children has me climbing walls, and also I read in a book once that one out of every four children born in this world is Chinese, and I didn’t want to take a 25% chance of having a Chinese kid. (I mean, how would we communicate?) I remember when I was in college a guy I knew saying that he intended to have children because he didn’t want white people to die out, and at the time, being totally naive to the idea of “white genocide” (this was the mid 80s), I thought that was funny. Imagine using racism as an excuse to have kids! But nowadays the idea of white genocide is no longer funny, even if I am confident that the European race is in no greater danger of extinction than any other major ethnicity.

One aspect of overpopulation and of environmental scares in general is that it’s mainly white people who are motivated to protect the environment. The Japanese, for example, are very clean and civilized, and do have some appreciation for the beauties of nature, and rarely throw trash on the ground, but they can be so money-driven that I’d guess they would have hunted commercially valuable species of whales to extinction by now, without compunction, if not for international pressure on them not to do it. Meanwhile China is industriously poisoning its own land, water, air, and people for the sake of becoming an economic superpower (though fortunately Mr. Trump has the balls to stand up to them and defend the economies of the west). For developing countries also, environmentalism is a foreign idea; most people in these places care more about getting money, cell phones, and western-style shoes than they care about overpopulation, deforestation, mass extinctions, CO2, or the ozone layer. The phenomenon of the panicky environmentalist is a product of western liberal civilization, and primarily of white people.

Some contrarians might say, “Oh, but what about the American Indians living in harmony with nature?” To them I would say that it is largely just a myth. American Indians drove entire herds of bison off cliffs so they could pick the ones they wanted down at the bottom. They set forests on fire to chase game out to the clearings where hunters waited in ambush. There is a small mountain not far from my home town of Aberdeen, Washington, and from the summit one can see easily the exact location and boundaries of the nearby Quinault Indian Reservation, because it is bare earth surrounded by thickly forested tree farms managed by white people. The Quinaults cut down their trees, sold the timber, and didn’t bother to replant. Stone age indigenous people lived in some harmony with nature because they had little choice. They simply lacked the technology to really mess things up.

Part of the reason why western civilization is characteristically more concerned with nature conservation than other cultures is that the west has produced most of the modern technology capable of noticeably damaging the environment, including internal combustion engines, chainsaws, aerosol spray cans, and nuclear reactors. Also, modern western civilization has produced relative peace and prosperity, and as the saying goes, good times breed weak men; and now, because of that relative prosperity, comfort, and lack of real problems, the lefties especially are cooking up artificial crises to howl about. It is human nature to be chronically dissatisfied if not flat-out miserable, so if we don’t have valid problems to fret over, we cook up invalid ones, or just imagine potential future dangers about which to worry ourselves sick. One thing about American liberalism that has bothered me for decades is the tendency to think up bad things that might happen, someday, and then demand that the problem (which doesn’t even exist yet) be fixed—if necessary by reducing people’s rights and freedoms. So our concern with environmentalism is the result of a combination of valid reasons and stupid ones.

Maybe what we in the west really need are genuine, real crises that will bring us together and cause all the culturally castrated social eunuchs to toughen the hell up. If we’re going to be miserable we may as well have a legitimate reason for it.

So anyway, liberal people of the European race are now so concerned with the environmental crisis du jour, whichever one happens to be in fashion, that they are too conscientious, or pessimistic, to bring children into such a potential nightmare. Also of course, honestly, they have other, more selfish reasons—children get in the way of a hedonistic, secular lifestyle, and are no longer necessary, under a socialized welfare state, as social security for a person’s old age. But for whatever actual reasons, white people are doing their part to reduce overpopulation, or rather their carbon footprint, and die off, leaving the world to prolifically breeding “r-selective” brown-skinned ethnicities. This serves further as a kind of feedback loop: so many “progressives” and leftwing activists are childless in part because the dystopian future they are creating is not their concern, because they have no children who will pay the price for their parents’ subversion of western civilization, along with its rights and freedoms. Après nous, le déluge. But I may be digressing again.

What the hell—I may as well toss in yet another digression regarding the irony of some European countries especially: A more or less socialist system pretty much requires a growing, or at least non-shrinking, population, because with negative population growth there is the huge problem of an increasing number of retired older people living off the taxes of a decreasing population of the relatively young. So at the same time that European nations discourage white people from having children, they justify mass immigration of non-westerners because the population is insufficient to maintain the feminized welfare state.

Getting back to my main point though, there is a potential disaster lurking behind all this environmentalist and neo-Marxist desire to prevent disasters. Ultraliberal dogma now declares, directly or indirectly, the European race to be the enemy of the human species, and the extinction of the white race is seen as a good thing, and a just revenge on the pale-skinned bastards for creating the modern world and rising to global dominance. Consequently, if the neo-Marxist white-hating left get their way, pretty much the only people who care about the global biosphere will be removed, and the earth will be overrun by prolific, overpopulating peoples who really don’t care about ecology all that much. Which, of course, could easily lead to a global environmental disaster worse than increased CO2 in the air. This should concern even people who hate white people. And we needn’t even drag in the issue of racial variations in IQ, or in problem-solving skills.

The hated white race has created a civilization that does value environmental conservation, and has invented the scientific study of ecology. People of European ancestry have been the pioneers with regard to real ecological consciousness, even in non-European cultures; and although such consciousness may survive the death of the race which devised it, it would survive in a mutated and less innovative form. We created the technology which now appears to threaten the biosphere, but we also have the volition to protect it all.

We white people invented trains, cars, and nukes, but we’re not causing the population explosion, as it used to be called when it was the environmental scare of choice. Then again, the third world is overpopulating because we created the medical technology and agricultural technology which allows them to do it, and we generously share that technology with them, so that our intelligence, inventiveness, and humanitarianism are threatening indirectly to wreck the environment regardless. But even though we have created power that most people lack the wisdom to employ responsibly, I suspect things would take a turn for the worse if the European race were to go extinct. The guardians of the environment would be dead, and maybe the Chinese would poison the rest of the world, just as they’re poisoning China. O lefties, beware of what you wish for, because you might actually get stuck with it. 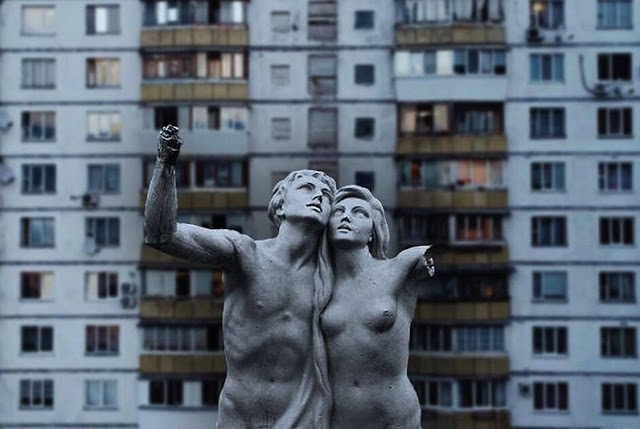