The Myth, or Delusion, of Progress


At all events, the error and the illusion are the same in both socioeconomic ideologies, namely the serious assumption that existential misery can be reduced to suffering in one way or another from material want, and to impoverishment due to a given socioeconomic system. They assume that misery is greater among the disinherited or the proletariat than among those living in prosperous or privileged economic conditions, and that it will consequently diminish with the “freedom from want” and the general advance of the material conditions of existence. The truth of the matter is that the meaning of existence can be lacking as much in one group as in the other, and that there is no correlation between material and spiritual misery. —Julius Evola

Several years ago, when I was living in a cave in Burma, a friend in America sent me some books, and, my friend being a female person, the books were mostly “chick lit.” One of them was Jane Austen’s great novel Pride and Prejudice, which I read with interest; and one of the most striking things about it, for me anyway, was the portrayal of the English gentry of the Napoleonic era as being almost insufferably stiff, formal, and hard to please. Austen’s descriptions of balls (formal dances), for example, struck me as so stiff that it was hard to imagine many people actually enjoying them. It appeared to me that the primary purpose of them was not enjoyment, or even really dancing, but rather artificial image projection and social posturing. I remember thinking that savages leaping and whooping around a campfire would enjoy their dancing, and their leisure time in general, much more deeply than some upper-class English stuffed shirt.

Which reminds me of the only University of Washington kegger I can remember ever attending, long ago when I was a student at a different university. At the time, and maybe now also, the UW was the most prestigious university in the state of Washington (Evergreen was a joke even back in the 1980s), and so the rich, ambitious kids tended to go there. The party, unlike parties at my own university, was similar to the Napoleonic cotillions: rich kids in their finest leisure wear stiffly postured, as though actually relaxing and having a good time was too plebeian, and somehow demeaning to their dignity. The experience was sufficient for me to lose interest in attending any more UW keg parties, and further decreased my already low opinion of snobbery and worldly ambition. Stone age cave people no doubt had parties that were much more fun.

Or consider rural Burmese villagers. Most of them are subsistence farmers, and most people living in “poverty” in the USA would be considered rich by comparison. Three generations of a family might be living in a single room bamboo shack with no electricity, no running water, and furthermore no welfare state, in a village with barking dogs, chickens, dirt, rubbish, and goat turds all over the place. The men might take their bullocks out to plow in the morning, and young women and girls are required to balance a clay pot on their head and walk to the nearest well, pond, or river to get water for the family’s needs every day. But despite all this material poverty, I have seen, based on many years of experience, that the average Burmese villager experiences less suffering or dukkha than does the average American city dweller surrounded by luxuries hardly imagined by those villagers. They are cheerful, open-hearted people who smile a lot, much more than does the average westerner; and it is sincere smiling too, not faked. This is because of the Second Noble Truth of Buddhism, namely that all suffering is caused by desire, and the average Burmese villager obviously has less desire than the average westerner. (Also I may as well toss in that I’ve met more hundred-year-old Burmese people than hundred-year-old American people.) The stoicism and extreme patience of Burmese people has always amazed me.

So, considering all this, I am very skeptical that modern progress—economic, scientific, technological, political, etc.—has really increased the happiness of the average person; and happiness really is the most important metric for human quality of life. My guess is that the average prehistoric cave person was no more miserable than, say, the average young, “woke” feminist working at a Starbucks, or just buying her coffee there. We live more comfortably, and arguably experience more sensual pleasure (some cave people slept on the ground and when they bathed, which might be seldom, the water was always cold), but psychologically the pluses and minuses still balance out in the long run. Our pain is less extreme maybe, but so is our happiness. And by the way, those cave people may have possessed more natural intelligence than us as well, considering that domesticated animals tend to be less intelligent than the wild type, and we’ve been domesticated ever since we stopped living in forests and became town dwellers tamed by centralized governments and increasingly civilized customs.

Bertrand Russell once said, “…although our age far surpasses all previous ages in knowledge, there has been no correlative increase in our wisdom,” which is clearly true. And it is wisdom, not physical comfort or convenience, that is the true source of happiness, or at least of equanimity and a relative lack of misery.

If the posturing gentry of Jane Austen’s novel were confronted with a meal of boiled beans and tough bread, and a thin mat to sleep on, they’d very probably feel as though some calamity had struck them (unless they were soldiers in the field, in which case they might accept the situation as a matter of masculine martial honor, though that too has gone into severe decline over the past century or so). I know from personal experience that a rough life is no guarantee of misery; one can be without possessions, without a home, without money, without family or close friends, and with an empty stomach and shivering with cold, and still be very happy—in fact a basic function of Buddhism is to teach its practitioners to be content regardless of outward circumstance. And one of the reasons for apparent increase in unhappiness in western culture is the loss of this sort of wisdom, and the adoption of utter superficiality in understanding how actually to be content in life. The primary difference between a chronically relatively happy person and a chronic malcontent is the mental states, not money or comfort or any material object.

So progress, so called, leads to greater comfort and convenience, but to less actual aliveness, on average, less depth of experience, and greater superficiality. Increased comforts and privileges lead to people being pampered, spoiled, and harder to please, if not simply numb like the debauched, soma-dependent sheeple of Huxley’s Brave New World.

The roughness and occasional brutality of the ancient world added intensity and vitality to existence, and required strength of body and spirit, courage, and a philosophical acceptance of the inevitability of pain and death. As the saying goes, a coward dies a thousand deaths, and most people are cowards in the postmodern society of the progressive west.

Despite all the increase in knowledge and relative material prosperity, spiritually we live in an age of mediocrity, of semi-life: there are fewer mass murderers, cannibals, and run-of-the-mill sociopaths, but also fewer saints. The best and the worst are eliminated by the same process. Sometimes I think the absolute zenith of human civilization occurred around 500BCE, when a kind of flowering of Spirit was sweeping over much of the “civilized” world (called the Axial Age by the philosopher Karl Jaspers), and manifested in India as a kind of dharmic miracle in which millions of people were actually concerned with breaking through the veils of illusion and attaining, or at least approaching, Ultimate Reality, and brought forth individuals like the philosopher Gotama of the Shakya clan. Though of course at the same time, in northern India and elsewhere, there were militaristic kings, bloody wars, bandits infesting forests and highways, public tortures and executions, and only the most rudimentary understanding of medicine. But still it was a miracle.

One danger of progressivism, and of worldly progress in general, and no doubt a major cause of the existential lostness of so many western people, is that the more “progress,” the farther we deviate from a lifestyle in harmony with primordial human nature—of which, absurdly, the “progressive” left denies the very existence. We would probably be happier, or less spiritually sick, if we reverted to a more Amish-like approach to life, with some amenities, like electricity maybe, plus some of the miracles of modern medicine, but still more or less natural, more in tune with nature, including human nature. How many readers can say what phase the moon is in right now, or what stars and planets are in the evening sky lately, or even what direction their house faces? Even a lot of the “woke” environmentalist types couldn’t say. The more artificial our lifestyle, the more likely it is that we will be in a state of friction with it, consciously or subconsciously.

On the other hand, just the increase of ideological chaos and uncertainty nowadays, as our erstwhile universal world view of modernism continues to implode, may cause us to become wiser, in the sense of being less attached to any samsaric world view. If the shit really hits the fan and our civilization is thrown into chaos and uproar (I mean even more than it already has), then maybe we’ll make some real progress. Consider the times when western civilization has undergone its greatest upsurges and resurgences: ancient Greece, Renaissance Italy, and also the aforementioned social and spiritual ferment in northern India during the Buddha’s time; rampant murder and social anarchy appear to be the catalysts of the greatest progress and the greatest flowerings of genius (hail Darwin), though human nature is stubborn, and our actual wisdom may not change all that much, which is regrettable, I suppose, but it may just be the way it is.

We may be stuck forever in a zero sum game of positive happiness and negative misery necessarily balancing out to nothing in the long run. Consequently we may have to make the traditional choice between the roller coaster ride of worldly sensuality, or the smooth sailing of dull, self-restrained neutrality. Although maybe the greatest progress for humanity would involve learning (or rather relearning) how to live life to the fullest, with all its pleasures and pains, without clinging to any of it, or refusing to accept any of it. 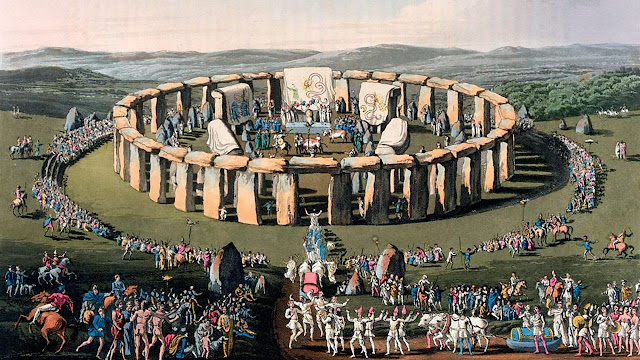