Without greed for gain, without aversion for loss, a sage does not put forth a claim as among superiors, nor as among equals, nor as among inferiors. He does not come to conception; he is without conception. —verse 13 of the Purābedha Sutta, of the Sutta-Nipāta


Also he would not conceive a view in the world based on knowledge, or on morality and observances either. He would not present himself as equal, nor would he imagine himself to be inferior, or superior. —verse 4 of the Paramaṭṭhaka Sutta, also of the Sutta-Nipāta


Unlike the western world today, race was not a burning issue in the Buddha’s time in northern India, if ancient Buddhist literature is any indication, and gender obviously hadn’t evolved to the level of a “hot topic” yet, though class evidently had. The Buddha occasionally spoke out against classist discrimination, favoring a relatively colorblind, meritocratic system in which a person is judged, if at all, on the merits of his own personal character and actions, not his ancestry. As I pointed out in part 1, anyone who was not disqualified for other reasons—no runaway slaves, no debtors, nobody legally obligated to serve the government, no branded criminals, no one with a serious disease like leprosy, no eunuchs, and so on—could enter the Sangha of the Four Quarters regardless of race. This almost universal acceptance of converts is similar to Christianity and many other religions, geared as they are towards the liberation, or at least the betterment, of the human race, and may be typical of spiritual systems in general.

Some historical considerations were mentioned last time, and so this time maybe I should back up a little and address a little issue that perhaps should have been mentioned first and foremost: What exactly is racism? There are at least two plausible ways of answering that question.

One possible definition of racism is considering one race to be better or worse, superior or inferior, especially when compared with another, generally one’s own, and resulting in hostility or contempt towards that race—or towards some specific member of that race. Another possible definition would be more along the lines of racialism, or scientific racism, or tenets of human biodiversity, in which one considers different races to be, well, different, physically and especially psychologically, without the negative emotions like hostility, hatred, resentment, or contempt, but acknowledging that those acknowledged differences may indeed result in some races being better at some things than other races. The main differences between the two types of racism are that the first involves feelings of aversion, and also a blanket, context-free notion of a group of people being “inferior.” Note that I do not include the Social Justice (Cultural Marxist) definition of racism, which asserts that only the dominant group in a society (namely Whitey) can be racist. I consider such a definition to be politicized arrant hogwash, and at variance with most dictionaries of the English language.

The first case of racism is obviously unethical and akusala, as it entails hostility and other forms of aversion; and in Buddhist ethics it is the mental state of the moral agent much more than the subsequent results that determine the moral quality of any action. At a deeper and more subtle level such contemptuous racism would be a clear case of māna, usually rendered into English as “conceit,” and which I have read literally means “measuring,” that is measuring oneself up against others. As seen in the verses quoted above, a monk striving for enlightenment shouldn’t even consider himself to be anyone’s equal, let alone superior or inferior, largely because all views pertaining to self should be dismissed. All of this kind of measuring, from the perspective of advanced Buddhist ethical practice, would be conceit, Wrong View, and a matter of samsaric delusion, as well as a stumbling block in the way of Nibbāna—but that is very advanced philosophy, and not for the common person trying to get along in the world. Buddhist ethics is extremely finely tuned.

But even backing away from the most subtle and profound Buddhist ethical philosophy, any claim of inferiority in general, without some specific context, would very probably involve some sort of veiled hostility, or at least some subtle atimāna or contempt. On the other hand, to acknowledge that races differ, based on empirical observation and statistical averages, may be samsaric and ultimately based on illusion, but nevertheless it does not imply hostility or contempt. (People on the radical left, or those just parroting the radical left's propaganda, may assert that the second type of racism, simply pointing out that there are significant differences between different ethnicities, necessarily involves hostility or hate, but I wish them good luck in trying to demonstrate such a claim.) Is it necessarily hateful to admit that West Africans tend to be taller and more athletic than East Asians, or better dancers, or that East Asians tend to be better at math, or have much lower testosterone levels?

Is stating empirical facts racist? Is reality itself racist? Or how about Charles Murray, who has written much about racial discrepancies that turn up in statistical data—does simply pointing out this stuff make him a racist hate monger? Personally, I consider Dr. Murray to be an intelligent and mild-mannered fellow who very bravely states facts that people (on the new left especially) hate virulently, often to the point of raging hysteria, with most of the hate involved being directed towards him by those who don’t like what he says. But considering the possibility (or rather the likelihood) that what he says and writes is true, then it is clearly of some importance and ought to be said. From a Buddhist point of view it’s ultimately delusional, not Ultimate Truth, because nobody really exists, or because comparing one group of people with another may be conceit, but then again, pretty much everyone in the world is delusional anyway.

Thus racism of the first type is clearly unethical, just as any action, even a thought, which is motivated by aversion or egoism is bound to be unethical to some extent. Racism of the second type, though, is not necessarily unethical, except to the extent that considering people to be intrinsically real is itself fundamentally delusional. In fact denying objective data because one doesn’t like it would be more aversive and unethical than accepting it; it would entail dosa or aversion with some extra moha, or delusion, added.

There is, though, a kind of grey zone in between these two types of racism, in which a race is considered to be inferior somehow, without hostility or hatred but still with a kind of subtle, latent contempt. The other side of the same coin would be considering some ethnicity to be superior in some way, and in such a way, especially if it is one’s own, that that ethnicity is particularly favored. Ethnic pride could easily fall into this category, regardless of the race or the justifications for that pride. Buddhist ethics is extremely subtle, and so every good Buddhist should be careful about his own mental states, and should examine his own motives as a matter of habit. Remember that it is your own motives more than any actual results of an action that determine its ethical value, at least from the perspective of Buddhist ethical philosophy.

So racism in a negative or unwholesome or immoral sense is not a case of simply stating perceived facts about race, let alone falsehoods. Unethical racism, like any other moral wrong, necessarily involves actions motivated by greed, hate, or delusion (lobha, dosa, or moha). To maintain that only whites can be racist is simply idiotic, or else Machiavellian manipulation of words for political purposes; such claims themselves tend to be motivated by race hatred and bigotry. Furthermore, the identity politics of the new left is similarly delusional, based as it is on self view and resentment of Whitey. But the lack of self-awareness on the left has been a dominant theme of this blog, so I won’t belabor the point here by belaboring it even more.

One consideration regarding possible racial discrimination is that Buddhism is rather cerebral, and thus is more attractive to relatively intellectual, head-oriented people, so unequal or unrepresentative  racial diversity within the Sangha or among the lay ranks may be more a matter of the second type of racism being correct, with regard to differing mental traits, than of the first type, namely deliberate prejudice, especially in the west. Buddhist philosophy is deep and requires some intelligence and careful consideration to appreciate it, so less head-oriented and more heart-oriented people will tend not to be as interested in it outside of a traditional Buddhist culture. I’ve encountered plenty of Buddhists in my life but have met only two black ones—aside from some very dark Sinhalese and Southeast Asians, some of whom are darker than a lot of people called “black” in the west. Of course there are literally tens of millions of people of color who practice Buddhism, most of them in Asia; so “white privilege,” though it apparently existed even in the Buddha’s own time, is probably a very minor factor in explaining the fact that few blacks and brown-skinned Latinos practice Buddhism at present. There are not many Theravada Buddhist monasteries in Nigeria or Mexico, for example.

Regardless of all the Social Justice dogma repeated at western Dharma centers, Buddhism is not inherently concerned with racial issues. Conceit and hostility are unethical irrespective of whether or not they are racially motivated. It is true that historically some Buddhists have harbored hostility or resentment towards people, often non-Buddhists, of other races. The Sinhalese Buddhists have been antagonistic towards Tamil Hindus for more than two thousand years; Burmese Buddhists and Thai Buddhists were historical archenemies; and more recently some Burmese Buddhists have expressed some intense dislike for Bengali Muslims, and also of course ultraliberal western elite Buddhists express dislike for their own whiteness. But this sort of thing is political and social first, and Buddhist second at best. I consider ultraliberal western meditations on mindfulness of white privilege, etc., to be just plain silly; though it may be that searching for one’s own white privilege could be like contemplating a Zen koan, an absurd riddle with no answer. Or maybe it could be like Ramana Maharshi’s meditation of “What am I?” in which one searches and searches for one’s inmost self (or in this case one’s white privilege), but can never quite grasp it.

So racism as some kind of social scourge is really incidental to Buddhist philosophy and practice, much as it is to Biblical Christianity or Quranic Islam. Praise for racial diversity in Dharma Halls is a recent artifact of western neo-Marxists playing at Buddhism. But sexism, on the other hand, is a very different scenario. Sexism is firmly established in even the oldest Pali texts, and attributed to the Buddha himself…but that’s a whole different kettle of wax. 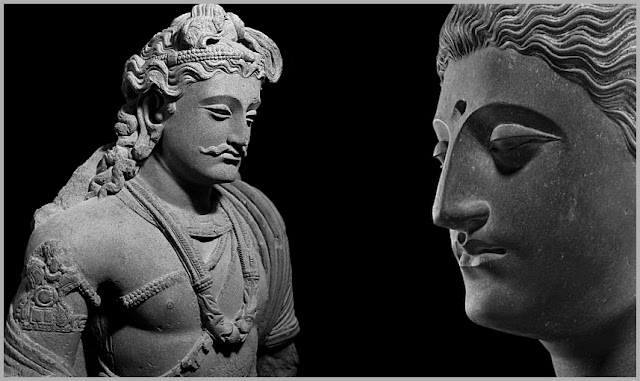