Should We Give Back Our Land to the People Our Ancestors “Stole” It from? (a hint: Nope)


HE has excited domestic Insurrections amongst us, and has endeavoured to bring on the Inhabitants of our Frontiers, the merciless Indian Savages, whose known Rule of Warfare, is an undistinguished Destruction, of all Ages, Sexes and Conditions. —from the American Declaration of Independence, with reference to King George III of Great Britain


This is one of those that should be unnecessary to write, but somehow isn’t, sort of like the one I wrote some time ago on how a borderless welfare state is a practically guaranteed disaster, or how 3rd wave feminism and traditional Islam are VERY incompatible. This one should be obvious to anyone with a capacity to appreciate history at least, which maybe rules out anyone below the age of forty, but still. It is true that Dinesh D’souza brings up the following topic sometimes, but most people don’t listen to Dinesh D’souza.

Leftists concerned with so-called Social Justice are occasionally inclined to bash Whitey, the new bourgeois of the new Marxism, with negative references to colonialism, genocide, and the general oppression of bodies of color which accompanied the European race’s expansion into non-European territories, including sub-Saharan Africa, India, Australia, and pretty much the entire western hemisphere; and even today the Israelis are accused of similar atrocities against the brown-skinned (and therefore victimized and superior) Palestinians in the former Roman territory of Judea. Sometimes the accompanying refrain is to the effect that white people should undo their evil and just pull up stakes and go back to Europe where they came from, or better yet just die. Some of you may remember the viral video of the Covington Catholic High School kids being admonished by a Native American activist to go back to Europe, because America is Native American land. The leftist corporate establishment and the sheeple who follow it were probably in agreement with the activist (although of course none of them were inclined to take his advice), and were outraged by the high school kids for looking racist and smug. And then there’s the nutty and nutless George Bridges, the president of the neo-Marxist indoctrination center known as The Evergreen State College in the American state of Washington. This is how he begins public addresses:

I begin our time together today by acknowledging the indigenous people of the Medicine Creek Treaty, whose land was stolen and on which the college stands. I would like to acknowledge the Squaxin people who are the traditional custodians of this land and pay respect to elders past and present of the Squaxin Island Tribe. I extend that respect to other Native people present.

In response to Native Student Alliance requests, we commit to opening every event with this acknowledgement.


It is fairly obvious, however, that neither Bridges nor anyone else in authority at Evergreen has any intention of actually giving back the “stolen” land on which the college campus rests. It’s little more than virtue signaling and the parroting of the anti-white propaganda that runs rampant at Evergreen.

But here’s the thing: Everywhere in the inhabited world, with the exception of very remote places like Pacific islands and maybe some areas of the Australian outback, has been “stolen” by one group of people from another, usually several times. For example, the first wave of Homo sapiens out of Africa which struck traction and made a significant impact on human culture is said to be a wave of proto-Australoids who spread across southern Asia starting around 70,000 years ago. They outcompeted and “stole” their new land from proto-humans or archaic humans, which possibly doesn’t count. But then, maybe around 40,000 years ago, another wave of human migrations spread out across Asia; and since these humans were more “evolved” and had a competitive edge, they drove the proto-Australoids that they found to near extinction, interbreeding to some degree, but leaving remnant tribes of the aboriginal inhabitants mainly in remote wilderness areas and also in Australia, which these new humans didn’t reach until tens of thousands of years later.

A similar event occurred in Africa with the so-called Bantu expansion. Up until just a relatively few thousand years ago, Africa was inhabited mostly by proto-Khoisan tribes, the ancestors of today’s Bushmen and Hottentots; but around 6000 years ago, or so they say, a new ethnicity of Bantu-speaking black people spread out of west Africa and “stole” most of the land formerly inhabited by the smaller, lighter-colored, less cognitively agile Bushman types. The negroid race didn’t have a sound foothold in the southern parts of the African continent until historical times, though of course now they accuse the whites, mainly the Boers and the English, of being the invaders and oppressors.

Even the American Indian tribes whose land was allegedly “stolen” by the likes of George Bridges were not the original occupiers of the land that was “stolen” from them. A relatively well-known example of what I’m attempting to illustrate here is the Plains Indians, formerly known as the Sioux Indians. They originally lived in the western Great Lakes region of North America, although of course their distant ancestors migrated/invaded from Asia; but with the domestication of horses (originally left behind by Spanish explorers, and later taken from white settlers) they became formidable warriors and, possibly in part because they were driven further westwards by European encroachment on their lands, they invaded and conquered the Great Plains of the central USA, “stealing” the land from other tribes. The American Indians were not living in some sort of utopian harmony with nature and their fellow man, either; in addition to plenty of intertribal warfare, driving herds of bison off cliffs, etc., some tribes also indulged in capturing and keeping slaves and performing human sacrifices. The Aztecs notoriously did this sort of stuff, and were themselves establishing a colonialist empire throughout much of Mexico at the time the Spaniards showed up. I will say, though, that the American Indians are much more tolerant and mature than most ethnic minorities nowadays, considering that almost all of the people offended by the term “Indian” used for Native Americans are not Native Americans. White people keep protesting about absurd trivia like the name of the Washington Redskins football team, calling it “offensive,” while most Indians just don’t give a damn. There’s a small college near my old hometown of Bellingham, Washington that to this day is called the Northwest Indian College. So I congratulate the American Indians for their equanimity and earthy, simple-hearted wisdom.

One bright side to this sort of consideration is that we European types can’t give back Europe to the people we stole it from because the Neanderthals are now extinct. Will Indians and Southeast Asians give their land back to the few remaining Australoids? Will sub-Saharan African blacks return their stolen territory to the Khoisan peoples? Of course not. Only Whitey is to be held responsible.

White people were evidently the original, aboriginal H. sapiens inhabitants of Europe, alias Cro-Magnon Man; so does that mean that Europe should be given back to the whites by driving out the millions of brown-skinned economic migrants, and maybe driving the Turks out of Thrace and Anatolia while we’re at it? Of course not! Ethnic Europeans are supposedly unworthy of having a homeland, or ethnic pride, or traditional customs and attitudes, unlike every other ethnicity (aside from maybe Hebrew Israelis). If whites indulge in such luxuries they are being abominably racist. Just more evidence, as though more were necessary, that the “give back the land” motif, as well as the whole “our land was stolen” motif, is just more singing to the refrain of Blame Whitey. That’s what it’s really about.

So again, as usual, all this talk about stolen land and evil colonialism and reparations and so forth is mainly just another form of “intersectional” cultural Marxism bashing western civilization, a way of destabilizing and undermining “liberal” society—as though a rejection of the modern civilization developed by Europeans is likely to be an improvement, and as though decline and fall into Brave New World degeneracy were some sort of progress. Plus it’s also one of many forms of sheeplike stupidity as people obediently follow along with whatever ideological fashion trend is spoon fed to them by academia and the “woke” corporate media.

Although I do favor the lofty idea that might doesn’t make right, and that the strong should conduct themselves benevolently, magnanimously, and honorably whenever practicable, the fact remains that Darwin is perennial God Emperor regardless of politically correct emotional wishful thinking; and the strong will continue to outcompete the weak regardless of leftist utopian ideologies. That is good, too, because it drives evolution towards something better, towards a more evolved humanity. Even if change isn’t entirely for the better, change is necessary for any living system, including a civilization—stasis is death. Everything is impermanent anyway. But still, decline and fall is not progress.

As a concluding aside, for those who insist on harping on about white people oppressing black ones, I would point out, based on statistics anyone can look up, like violent crime stats in the USA for instance, that white people tend to treat black people better than black people treat each other. Just something to consider there. 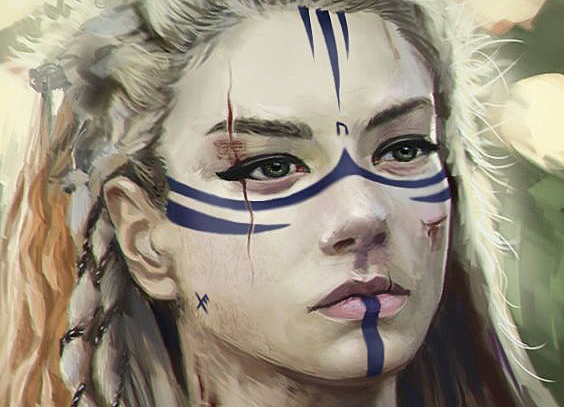