There are still men who do not belong to this modern world and whom nothing in this world could lead astray, exalt, or humiliate—but who nevertheless are ready to fight this world with all their strength, as soon as it is time.

Well, at long last I finished reading Pagan Imperialism by Julius Evola. Despite its shortness, only around 150 pages, it took a few months, due largely to the relative dryness of the material, and the fact that I was attending to many other things, so I wound up averaging maybe just two or three pages per day. Then I went on more or less of a vacation and did very little reading and writing while a friend/supporter was here (and we even went camping)…and so finally I am finished and ready to write my own little critique of the book, and to some degree of Evola’s political philosophy in general.

I would like to point out, before wading into this critique, that Julius Evola was not a politician, and was not primarily interested in politics or sociology, not even fascistic sociology. He was an independent aristocrat with many interests, and wrote extensively on esotericism, spiritual philosophy, and human sexuality. He was, however, a sincere fascist (though not a member of the capital-F Fascist Party of Mussolini’s Italy), and he had some very interesting things to say about western civilization, especially European civilization, and the path to be taken in order for it to regain its primordial purity, vitality, and glory. Even if one disagrees with him, and most people do on politics at least, his ideas are damned interesting, even if expressed rather dryly in his books.

Pagan Imperialism was an early work which Evola later considered to be the product of naive youthful radicalism, insufficiently moderated by realistic political practicality, which is understandable to people who have read it. It is also a product of the profound disillusionment with liberal “progress” bordering on despair which Europeans experienced at the end of the First World War. The Great War was a massive, nightmarish wakeup call to many in the west who thought great wars had become a thing of the past; and it showed many, including Evola, that the path being taken by the west based on such Enlightenment values as secularism, science, democracy, and equality were leading in the direction not of “progress” but of increased moral degeneracy and dysfunction, leading ultimately to civilizational collapse.

The first edition of the book was published in Italy in 1928, when Evola was around thirty years of age. It had minimal impact on Italian fascist thought at the time, although a Vatican-backed rightist magazine accused the author of being a satanist for having written it. After this, Evola moved to Germany where he wrote an extensively revised second edition, published in German, shortly before Hitler came to power in 1933. This second edition, which is the version I just read and intend to comment upon, was more directed towards fascistic Germans—and many of them were at that time, fascism being seen by many as a superior alternative to Marxism as a vehicle for radical change for the better—resulting in Evola speaking much more about the presumed Nordic origins of the Aryan race, and expressing somewhat less hostility towards Protestantism, though he was still pretty hostile, considering the Protestants to have dismissed almost everything Aryan and Roman from the ancient Christian Church and replaced it with the more feminine, semitic, and “telluric” spirit of Christianity’s Jewish origins. He also expanded his discussion of the Roman eagle to occasional mention of the two eagles: Roman and German.

With regard to the book itself I suppose I should explain the title first and foremost; in fact a more or less thorough explanation of the two words of the title may do well enough to summarize the entire book. The two words, Pagan Imperialism, evoke themes that overlap considerably, with Evola of course combining them to describe one ideal, but I’ll do my best. So first, the word “Pagan.”

For Evola’s purposes Pagan essentially means Aryan, not merely in a racial sense but more importantly in a traditionalist one. Evola viewed the ancient Aryans practically as demigods, certainly superior to the men of today, and he yearned for a return to a more heroic and also a more spiritual age. In fact he did not differentiate between the heroic and the spiritual, as he felt that the two went hand in hand—or at least they did in the glorious golden past, and damned well should today also.

Like many European nationalists of the early twentieth century, Evola believed that the original homeland of the Indo-European or Aryan race was in northern Europe. A Nordic or more or less Germanic origin was favored by many German ethno-nationalists at any rate, and Evola continually refers to “the Nordic-Aryan race.” There is some empirical support for the purity of Aryan (Indo-European) blood in northern European Nordic types, though most authorities consider it more likely, based on archeological evidence, that the Aryans first arose somewhere in the vicinity of the Black Sea, with the ones who migrated into northern Europe settling in lands that where sparsely populated, with no cities or even small towns, so that their primordial Aryan blood was less diluted than that of their brothers who invaded and settled in the more populous regions of the south. I mention this partly because of my perception that Evola disdained rational objectivity and empiricism sufficiently that he was more concerned with a viable mythos than with a substratum of empirical fact as a foundation for his proposed new fascistic Aryan civilization.

Regardless of where the Aryans originally came from, Evola considered one of the last, almost pure manifestations of primordial Aryan “solar” virility to be Rome, with the Empire if anything being even better than the Republic in certain important respects. He considered medieval European feudalism to be a step down from the Roman Imperium in its prime, but still not so bad, and certainly better than what has come after, as will be discussed when we get to the second word of the title of the book. Evola being an Italian, and an imperialist, no doubt helped him to arrive at this conclusion concerning Rome, but his reasoning seems pretty plausible.

The fact of his being Italian not only helped him to favor Roman civilization as a glorious example to be emulated, it also facilitated a certain tolerance of Roman Catholicism. He considered the Catholic Church to be a compromise between semitic, socialistic, egalitarian, pacifistic early Christianity and the more virile, “solar” Aryan paganism of traditional ancient Rome—which again seems plausible, even probable.

Nevertheless, Evola viewed Christianity overall as a pernicious infection of femininity and “lunar” phenomena like socialism, democracy, and greater concern for the poor than for the elites and the aristocracy (that is those truly superior), or at least an egalitarian equal concern, placing superiors and inferiors at the same level. Fortunately, according to Evola, Roman Christianity’s compromise with the ancient hierarchical, noble Aryan spirit, incorporating some of the stratification and authority of Roman paganism into the Church, maintained some semblance of a vibrant and strong society throughout the Middle Ages, resulting in such virile displays of Christianity as the knightly monastic orders and the Crusades. Evola saw Protestantism as a degrading return to the feminized, semitic collectivism and egalitarianism of Judaism and primitive Christianity. Needless to say, he did not have much use for the social reforms of modernism at all…

…we will find, essentially, the spirit of the Reformation, the same spirit from which modern organization is derived: anti-imperial, anti-aristocratic, anti-religious—because it reduces religion to mere sociality—and anti-qualitative, characteristic of Anglo-Saxon and American society.

One pervasive theme throughout the book is the ideal of Ghibellism (as opposed to Guelphism), the belief that the Church must be subordinate to the State. This use of terms comes from the Middle Ages, in which the Popes and the Holy Roman Emperors were both struggling for sole mastery of Italy, of Europe, and of Christendom, the Ghibellines favoring the Emperor and the Guelphs favoring the Pope. (Anyone who has read Dante’s Inferno may recall that the Guelphs and the Ghibellines hated each other’s guts with the same sort of frenzy that has taken hold of the two main political factions in America lately.) Evola favored the idea that the Emperor should be above the highest priest, that he should be essentially a deified god-man who speaks with his own authority on matters of spirit, and that priests are merely the subservient slaves of a god (or God), unworthy to be true leaders. In his Ghibellism Evola differed from his friend René Guénon, who favored the Guelphs. But more on Evola’s attitudes toward Christianity a little later. 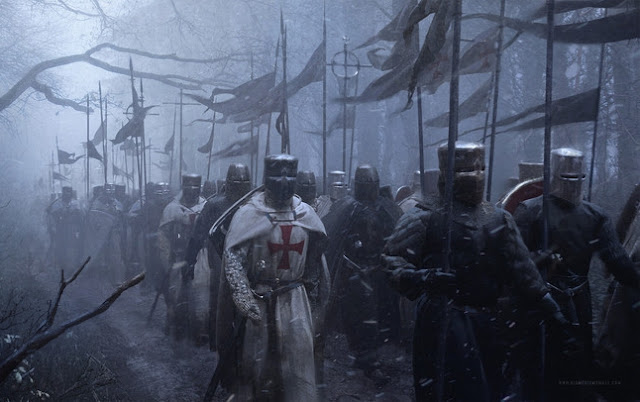