Two Tales of the God-Emperor

This level, however, can only be maintained by one in whom—in accordance with the expression just used—superiority is not based upon power, but power upon superiority….Here the ruler is not so much a specific mortal being, but rather a universal element, a cosmic force. —Julius Evola

Two little diversions from orthodox meditation are recorded below. Because I had been reading a book by Julius Evola in which a deific God-Emperor with superhuman powers looms large, and then because I was writing about the same book, I have been thinking a little more than is normal about God-Emperors, and the two stories that follow are about one of those.

One night a few weeks ago I imagined the first little tale, which would make a nice poem I think, although I'm not good at poetry. The second story is more recent. The stories are about a kind of Pagan God-Emperor who has, among other blessings, the power of healing: he can touch a person and bless them and their health is restored to perfection (he supposedly has been granted this power by the god Apollo).

One day a blind man is brought before the God-Emperor and the people ask him to bless the blind man and restore his sight. So he looks reflectively at the blind man, and although he agrees to bless him, first he asks who is this man's caretaker, who has been caring for him and helping him through his darkness. Finally a young woman is almost pushed to the front, very shy and humble and modest, almost mouselike, clearly afraid to be in the presence of the Emperor. She is thin and haggard-looking, wearing clean but plain, old, worn clothes, indicative of poverty and hardship, and the implication is that she has willingly and gladly sacrificed her own welfare to tend to this man whom she loves. She could have been pretty, but all the difficulties of her life, much of it brought about by caring for this blind man, have drained her of vitality and youth.

So the Emperor says he will bless the man, but that he intends to bless the woman first. Immediately she stammers out, totally intimidated by his presence but motivated by love, that he should please bless the man first, because he has been deprived of his sight for so long, and she is really doing well enough. But the Emperor tells her that he wants to restore her to the full bloom of her beauty, because he wants the first sight this man sees to be her shining face, radiant with health and with love for him. So he takes her hand and blesses her, and she is made well. She stands there crying with her heart overflowing with emotion.

Then the Emperor begins instructing the blind man that he will stand behind him and touch his shoulder so that the first sight he sees will be this good woman who has served him so faithfully and with so much love...but the sound of her sobbing and the excitement of the moment has him half crazed and insisting that the Emperor heal him now so he can go to her and comfort her.

So the Emperor touches his shoulder and blesses him, and the first sight he sees in his life is the blushing, beautiful, weeping face of this woman who has loved him and cared for him so tenderly all these years, and whose entreaties caused them both to be standing before the God-Emperor, and he cries out in love and tenderness for her and rushes to her and they start crying in earnest in each others arms.

The crowd of onlookers are also weeping at this point; and after a few moments of watching quietly the Emperor suddenly averts his face and walks away quickly, waving away his own bodyguards so he can be alone. At first the people don't understand why he suddenly hurried away from them after blessing the couple, but the poem, or whatever it is, ends when people realize that the Emperor didn't want them to see that he was crying too.

The God-Emperor is on a military campaign, deep in barbarian territory, and a fierce battle is soon to ensue between the smaller forces of the Empire and a vast horde of the barbarians. The God-Emperor is confident of victory, as his men, though fewer, are better trained, better armed, better disciplined, and better commanded, plus the God-Emperor’s army has merited the favor of the Gods Themselves. But one of his foreign-born mercenary generals, upon hearing the plans for the upcoming battle, and hearing of the enemies’ much greater numbers, and advising the God-Emperor to avoid a pitched battle under such conditions, and hearing his advice be rejected, in a fit of apprehension, gloom, and bitterness, mutters aloud, “We are all going to die.”

Upon hearing such defeatism on the eve of a great battle, the God-Emperor immediately draws his jewel-handled Imperial dagger and stabs the man on the spot, and the man drops to the ground, blood flowing from his mortal wound.

The God-Emperor exclaims that he will not allow such talk of defeat before his soldiers; but he has a long reputation of wisdom and benevolence, though a strict enforcer of discipline in the army, and he sees raised eyebrows and looks of concern on the faces of many of his other generals and staff. So he decides to show mercy this one time, reaches down, and touches and blesses the man, instantly restoring him to health.

Then the God-Emperor warns the officer never to utter such talk again, and that he is willing to let this pass…but as he is willing to show forbearance in this case, he sees in the eyes and heart of the restored officer first fear, then anger, and then hate, slowly kindling against the God-Emperor for stabbing him and allowing him to fall and wallow in his own blood before his fellow officers. Knowing now that he has made a bitter enemy for life by sparing the man, he rethinks and stabs him again, and lets him fall again, and then bends down and wipes the blood from the ornate blade of his dagger onto the again-dying man’s clothing.

Upon straightening up again, he sees on the countenances of his generals and staff looks of real concern now, as though they are all thinking, “What in hell!? The God-Emperor restores a man’s health only to stab him to death a second time?” (They did not know of the officer’s thoughts and feelings, and the bitter hatred in his heart towards his Exalted and Imperial Lord.)

So the God-Emperor, seeing the concern growing to alarm among his generals and staff, in some mild exasperation, sighing, turns back to the dying man again wallowing in his own blood. The God-Emperor gazes upon him seriously and says to the dying man, “It’s all right, man, you have nothing to fear. I tell you that your spirit does not die, and will not die, but that you will simply enter a new life after this one. And you have been more good than bad in this life, so your next existence will be better than this. So have no fear, and be of good cheer, for the Mother of the Gods loves you as her own child, and your spirit will carry you to a better place than this one. Be not troubled, but be fearless, even joyful, as you begin this new journey.”

Because of the God-Emperor’s soothing and encouraging words, the man dies in an uplifted, serene, and even blissful state, and the scene is very edifying and solemn for the attendant generals. Then the God-Emperor, with all eyes in the room staring at him now, points to the stiffening corpse and says, “Someone dispose of this,” and turns on his heel and strides out of the room. 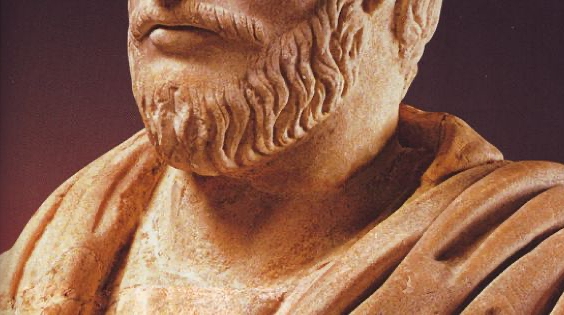