On the 500-Year Lifespan of Buddhism (revised and expanded)

(NOTE: I wrote the bulk of this article way back in 2012, about a politically incorrect prophecy attributed to the Buddha, as recorded in the ancient Pali texts. Subsequent to that time, a few years ago, when I was in Burma last time in fact, I mentioned the strange case of the 500-year lifespan of Buddhism to a very intelligent Burmese monk named Sayadaw U Vimala, who gave an interpretation not included in the old essay, so I update it here. Venerable U Vimala’s interpretation may be the most attractive, or least unattractive, interpretation to many people over this controversial issue, so I suppose I should add that ingredient to the stew. Also I have made a few very minor stylistic changes, just because I’m fussy. Enjoy.)

There is a very politically incorrect story in the Pali Buddhist texts, in the tenth chapter of the Vinaya Cullavagga, describing how the Buddha's aunt/stepmother Mahāpajāpati Gotamī approaches the Buddha and asks him for permission to become the first ordained Buddhist nun (bhikkhunī). She asks three times. The Buddha, evidently considering this to be a very bad idea, sternly refuses all three times. Mahāpajāpati Gotamī goes away weeping. Later she begins following the Buddha and standing outside his door with dust on her body and tears on her face, grieving because women are not allowed by the Buddha to be ordained as nuns. The Buddha's cousin and faithful attendant, the venerable Ānanda Gotama, who in the texts is often portrayed as having a tender spot in his heart for women, then remonstrates with the Buddha on Mahāpajāpati Gotamī's behalf. After being sternly refused like Mahāpajāpati was, he employs persuasive arguments that the Buddha cannot deny, for example that women are just as capable of attaining enlightenment as men are. Finally the Buddha relents, but gives Ānanda a sort of "OK, but now you've done it" speech:

The purpose of this article is not to discuss the controversial issue of the recent attempted revival of the Order of Theravada Buddhist nuns. I've already written some of my ideas on that subject in previous blog posts ("The New Bhikkhunis," published July 1, 2012 on the old Nippapañca Blog, and a few others after that). The main purpose of this article is to address the strange prophecy made by the Buddha in the above text, that Buddhism would survive for only 500 years—not 500 years from now, mind you, but 500 years from the time of the Buddha; and if that is the case, then Buddhism should have died out around 2000 years ago. There are a number of possible explanations for this prophecy, and I will consider some of the most obvious ones. 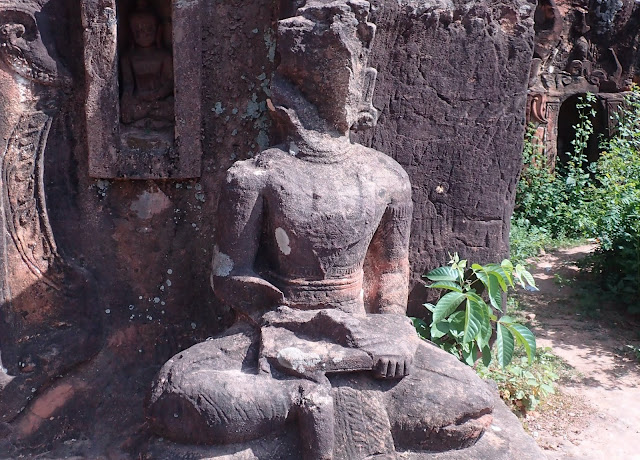 This issue of the strange prophecy leads to the interesting either/or dichotomy of Eastern and Western Theravada Buddhism: the Eastern Buddhists being psychologically compelled to accept it all, and the Western Buddhists casually dismissing any parts they don't want to believe. Another rather bizarre example of the former extreme is a case I came upon in Burma. There was a great and brilliant scholar-monk named Mingun Tipiṭakadhara Sayadaw, who I was told was in the Guinness Book of World Records for his prodigious memory: he had memorized by heart the entire 40-volume edition of the Pali Tipiṭaka, plus several other works like commentaries and Pali grammars. He knew the Pali texts inside and out, and had received a long list of ecclesiastical titles for his scholarship. So he well knew that, according to these texts, the Buddha was tall, but not phenomenally so; people would often meet the Buddha and mistake him for an ordinary monk, for example. But, the commentarial tradition asserts that Gotama Buddha was 4 1/2 times the height of an ordinary person, i.e. approximately 25 feet (8 meters) tall. Being exceedingly devout, the venerable sayadaw was not able to doubt even the commentarial tradition; consequently, also being brilliant, he came up with the following way of reconciling the data: According to him, people were more honest and virtuous in the Buddha's time than they are nowadays. Because of this, the gods loved humanity more. Thus the gods in charge of influencing the weather caused the rain and sun to occur more seasonably, yielding greater benefit to the crops in farmers' fields. The more greatly benefited crops were more nutritious...the result being that in the Buddha's time everybody was much larger than they are today, averaging somewhere around 20 feet in height.

At the other extreme, many Buddhists of the West reject not only talking animal stories, the theory of a flat earth floating on water, etc., but even such fundamental principles of Dhamma as the value of seeking out and examining unpleasantness, No Self, karma conditioning our reality, or even the possibility of realizing Nibbāna Itself. Dhamma can thereby become something completely integrated into worldly, materialistic Western culture. The result can be not only a pale shadow of Dhamma, but a pale shadow of a dismembered fragment of it.

Consequently, some Middle Way between unquestioning dogmatism and casual rejection of the parts we don't like may be in order—the consideration of Dhamma not in terms of acceptance or rejection, belief or disbelief, but in terms of "I don't know. I'll consider it." So long as we adjust the box to fit Buddhism, as Easterners tend to do, or adjust Buddhism to fit the box, as Westerners tend to do, we are still stuck in the box of our own limitations, our own limited beliefs. The point is to get out of the box; and outside of the box is "I don't know." By accepting this universal "I don't know" we attain what ancient Greek philosophers called ataraxia, the peace of mind which comes from suspension of judgement. I think in Christianity it's called "the peace that passeth all understanding." But we can still use the box to keep our junk in.