Seriously, I Feel Like a Pagan in Late Fourth Century Rome

In recent years, the idea has spread widely in the West that ‘progress’ will be automatic without effort, that everyone will continue to grow richer and richer and that every year will show a ‘rise in the standard of living’. We have not drawn from history the obvious conclusion that material success is the result of courage, endurance and hard work—a conclusion nevertheless obvious from the history of the meteoric rise of our own ancestors. —Sir John Glubb

It may perhaps be incorrect to picture the welfare state as the high-water mark of human attainment. It may merely prove to be one more regular milestone in the life-story of an ageing and decrepit empire. —same

I have read Edward Gibbon’s The Decline and Fall of the Roman Empire about three times now, some parts of it several times. Maybe I’ll read the whole thing again someday. But some parts of it are very heavy reading, especially the parts dealing with the last hundred years or so of the Empire in the west—namely the period between the Battle of Adrianople in 378, in which an army composed mostly of Goths annihilated the main Roman military force in the east, including the Emperor Valens who was commanding it, and at which point Gibbon considered the Decline to end and the Fall to begin in earnest, up through the final collapse of the western Empire, with the overthrow of Romulus Augustulus in 476 by the barbarian mercenary leader Odoacer. It reads like tragedy because it is tragedy, and it is even more tragic because it actually happened. Classical western civilization, on which our own civilization is based, crashed and pretty much died, resulting in cultural darkness and the thousand-plus year reign of intolerant fanatical Christianity.

It must have been really heartbreaking for any patriotic Roman, especially a Pagan who still believed in and upheld the traditions of his ancestors, to see his great nation, in some ways the most glorious that the world had ever seen, tottering and crumbling around him, and seeing a hysterically intolerant cult, literally worshiping a deified Jewish political criminal, with its followers hating their own country and traditions, consigning their own ancestors to hell and fervently praying for Rome’s destruction, and hating in an intolerant frenzy, and deeply wanting to punish and silence, anyone who dared to disagree with their strange beliefs.

The saddest part of it all would not be the rampaging barbarians killing, raping, burning, and pillaging, or the gradual collapse of the political system, or even the hysterical Christians pulling down statues and desecrating Pagan altars and temples, banning Pagan books, and persecuting conservative traditionalists. The saddest aspect of it all would be seeing the sheeplike passivity and demoralization of a once proud, aggressive, and freedom-loving nation, with the working classes overburdened with taxes and debt and oppressed by intrusive laws, to the point of being unwilling or just unable to raise a family or own a home, and the aristocracy cavalierly selling out the future of their country for the sake of their own present wealth, convenience, and privileges, and fighting against any attempts at genuine beneficial reform.

Needless to say, I feel like we in America, and in the west in general, may have already reached our Battle of Adrianople, or are very near to it. At the least we seem to have arrived at the end of the reign of our Julian “the Apostate,” the last Pagan Emperor.

Julian of Rome was killed in Persia while fighting Persians; but an ancient conspiracy theory has it that he was not killed by a spear thrown by a Persian soldier, but rather by one thrown by a Christian Roman who secretly hated the Emperor for being an unbelieving (and therefore damnable) heathen. One little morsel of evidence in support of this theory is that the Great King of Persia reportedly offered a rich reward to any Persian soldier who killed Julian, and nobody came forward to collect the reward. Julian’s successor was a Christian army officer named Jovian, who was pretty much of a nonentity, who made a disgraceful and humiliating treaty of capitulation with the Persians (now called Iranians), and who died shortly thereafter. (Jovian died before ever returning to the new capital city of Constantinople, on the night of a huge feast; Gibbon suggested that the cause of death must have been either the quantity of the wine or the quality of the mushrooms. At least the Roman Julian’s successor was popular with the army, wasn’t senile, and was easily capable of forming coherent sentences.)

Going with this analogy, or theoretical case history of history repeating itself, Donald Trump of course has been more or less our Julian, our establishment-defying apostate who believed in the ancient traditions of his country, and loathed what it was becoming as those ancient traditions were rejected by intolerant radicals gone mainstream, and the spineless multitude, including elites, who conformed out of ignorance, indifference, fear, a desire to follow popular ideological fashions for the sake of their reputations and short-term benefits, or just mindless conformity.

Of course Mr. Trump and the historical Julian are very different in many respects. For example, Trump is no scholar or philosopher, nor does he display any marked refinement of character. But still, he has the ominous potential be the last President of the United States to uphold our traditional republican (with a small r) system and values. Now that he is removed from authority, by obviously shady means, the nation is being overwhelmed by a hysterical and intolerant new cult that also happens to be of Hebrew origin and also hates traditional European civilization. Also it is a minority movement going with numbers of actual followers, but its intolerant zealotry has launched it into prominence and power—and unfortunately, history has shown that intolerant zealotry is often a winning strategy, even if the ideology behind that zealotry is patently asinine. I am obligated at this point to admit, as I do pretty much every time I make the comparison between ancient Christianity and postmodern cultural Marxism, that at least the ancient Christians enjoyed some semblance of a real moral high ground, regardless of the hysterical extremes of its most influential advocates.

And, of course, the Americans of today are as degenerate, demoralized, and weak in their own ways as were the decadent Romans of the fourth and fifth centuries, with the aristocratic elite not giving a damn and selling out their own nation for the sake of their own wealth, convenience, and privileges.

Not long ago I was optimistic in the hope that our Julian would fare better than the first one; but now I am not nearly so optimistic. It may be that America still has sufficient vitality to avoid utter cultural and political collapse, with Chinese Communists, or lackeys of same, and not Germanic barbarians, taking charge as the new overlords. Then again, our nonentity Jovian appears already to be compromised, with the Chinese no doubt holding blackmail-worthy information concerning him and his family over his head. And our Julian, though deposed (not simply by a rigged election but by a profoundly rigged and corrupt system), is not yet dead.

Sir John Glubb, in his classic essay “The Fate of Empires and Search for Survival,” stated that great empires, or prosperous world powers, tend to last only around 250 years. They go through a life cycle of tough pioneers becoming conquerors, then prosperous generators of wealth and culture, and finally decadent, fearful, materialistic, irreligious, multicultural, and socialistic sheep. It is interesting that Glubb’s explanation of why Rome remained relatively glorious and powerful for so long is that it underwent a kind of reset or reincarnation with the end of the Republic and the birth of the Empire, so that each of the two phases went through its own life cycle.

America, being a sort of reincarnation of Rome, may undergo a similar reset; in which case Trump may come closer in some ways to the first Caesar, assassinated by his own Senate on the Ides of March, than to Julian the Apostate. Caesar’s demise triggered a civil war, with the populists ultimately winning, sort of, in a revolt against the senatorial elite. Then again, maybe Trump more closely resembles one of the earlier forerunners of Caesar, like maybe Marius; but Biden is obviously no Sulla. On the bright side, the shitstorm elicited by the destruction of Caesar led to a reset of a situation gone irredeemably bad, which of course gave the civilization a new lease on life…though in a necessarily more authoritarian system, because the people had become incapable, or just unwilling, of governing themselves.

At any rate it seems to me that the historical and traditional America is dying, to the cheers of the members of the new fanatical cult of universal compassion for believers and hatred for infidels, and to the delight of America’s enemies. What will replace the old republican system established by the founding fathers I don’t know, but I sure as hell hope there won’t be a thousand year reich of intolerant lefties, a new age of narrow-minded medievalism. In the words of Sir John Glubb:

After, perhaps, several generations (or even centuries) of suffering, the impoverished nation has been purged of its selfishness and its love of money, religion regains its sway and a new era sets in. 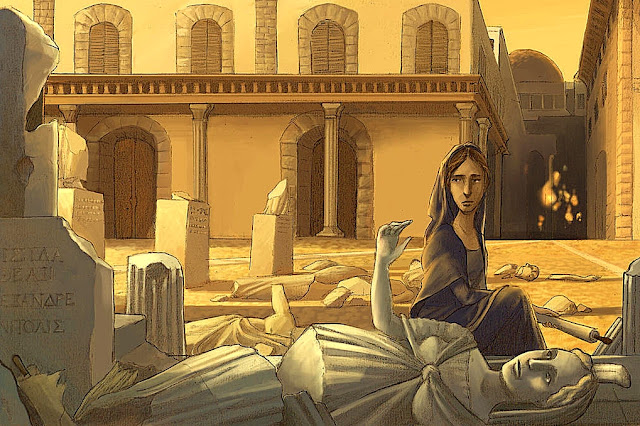 Sir John Glubb’s “The Fate of Empires,” which is short and definitely worth reading: