How the Ancient Pagans F*cked Up

Before I begin any philosophical harangue I suppose I should clarify a key term in this essay: in the following discussion, “Pagan” refers mainly to Classical polytheistic Paganism as practiced by the pre-Christian Greeks and Romans, and the peoples who adopted this religious culture as a result of conquest or voluntary imitation. Even so, much of what is discussed would apply equally well to, say, Celtic and Germanic polytheism in the pre-Christian west. I’m mainly referring to the mainstream religion of mainstream pre-Christian western civilization, with Rome being arguably the historical culmination of that.

I have observed before, and will probably observe again, that one of the greatest calamities to befall western civilization is that ALL of its indigenous spiritual traditions were more or less totally wiped out by the hysterical intolerance of Christianity (though Evola did point out that at least Roman Catholicism contains many elements to this day of mainstream Roman Paganism). It is also unfortunate that, thus far, the European West has had no outstanding spiritual genius, no great original, inspired prophet founding a whole new religious system and paradigm for the people—unlike the Jews, the Arabs, the Chinese, and of course the Indians several times over. It would be very nice if we eventually do have our own charismatic, inspired prophet, and not a Christian one, but thus far our original prophets have been intellectually oriented philosophical thinkers, not spiritual religious leaders.

Just for starters, poets (instead of inspired spiritual practitioners, let alone adepts) described the gods as behaving no better than humans. They were capricious, petty, and often very foolish, and prone to indulge in rape, incest, and murder on a scale beyond that of an ordinary foolish mortal. One of the most famous stories in classical mythology was the origin of the Trojan War, in which three vain, jealous goddesses tried to bribe the Trojan prince Paris to choose them in a beauty contest, with of course catastrophic results for the humans involved. This human, all too human character of the gods of mainstream Greek and Roman antiquity is due, no doubt, to the limitations of human imagination in general, especially the limitations on the imagination of worldly poets. (A similar phenomenon occurs with the mundane, stupid, essentially human aliens of modern mainstream science fiction, like Star Trek. Probably the stupidest technologically advanced science fiction aliens of all time are portrayed in the 2002 movie Signs, who tried to invade a planet 70% covered by, with the remainder occasionally rained on by, a substance that was deadly poison to them, and they didn’t even bother to use any kind of technology to protect themselves from it, not even freaking raincoats—but I digress. I must admit that the ancient Buddhists were also guilty of this very human shortage of imagination with regard to their imaginings of heaven and heavenly beings. As the the Greek philosopher-poet Xenophanes famously said, if cows and horses were religious, their gods would resemble cows and horses.)

A primary purpose of pre-modern and especially very early religion was to maintain order in society by establishing a uniform world view among the people, a reasonable or at least acceptable interpretation of the universe and everyone’s place in it, and thereby also some emotional security for everyone. But it tended to do so in a relatively crude manner by later standards, and with very little ethical philosophy, and of course with a pre-modern and mythological approach to cosmology. So the poetical stories of the ancient gods eventually got old and were outgrown, as did many of the outward ritual forms.

(I may as well also add here that something about the European race may involve a certain amount of “spiritual retardation,” either genetic or cultural, which causes us to be extroverted and materialistic, looking outward instead of inward in our attempts to understand Reality. This has made the European race the leaders and masters of modern worldly Samsara, but rather backward with regard to matters of Spirit. As the Good Book says, you cannot serve both God and Mammon, and the West has specialized in Mammon—that is, in secular worldliness.)

Roman and Romanized people had become lukewarm with regard to organized religion, with ambitious and corrupt politicians becoming the high priests under the Roman state religion of public rituals to maintain the Pax Deorum: peace between the gods and the nation, having the gods on “our side.” Also it seems that Classical civilization had simply run its course in accordance with the cycle of history—everything that has a beginning also has an end, in accordance with the principle of anicca. Thus the people were also demoralized and at least borderline desperate for answers to their increasing problems in life as an era ground to a close and headed toward dissolution. And the Christians capitalized on this: their own new intolerant zeal, combined with an apocalyptic narrative offering the “only hope” for surviving it, trampled underfoot a stale and mostly uninspired set of beliefs and rituals. This resulted in an oppressive and narrow-minded monoculture that stifled Western civilization for a thousand years (though at least some of the architecture was magnificent).

The last Pagan Emperor of Rome, Julian “the Apostate,” tried to use Christianity against itself, requiring self-righteous, superficial Christians to live in poverty for example, to be in the world but not of it in accordance with their own scriptures and the commands of their own God. Also he used other forms of subtle and gentle persecution, being careful to avoid making any more new “holy martyrs” (many of them no more saintly than the new St. George Floyd of Minneapolis, and if you doubt his martyrdom and canonization just look at his Wikipedia article), and also organizing a newish sort of Paganism based on Neoplatonism (from which Christianity itself derives much of its philosophy and mysticism), with priests selected for office based on rectitude of life, devotion, and knowledge, rather than on political and social standing. He also tried to get the Jews to rebuild their Temple in Jerusalem to marginalize the Christians there…but Julian died after less than three years as Emperor, very possibly by the spear of a fanatical Christian soldier in the Roman army.

Now history is repeating itself, and the same sort of thing is happening, not only with the now default Western religion of Christianity, now also grown stale, but to some degree even with modernity, including rationality, objectivity, and empiricism. The modern paradigm seems largely to have run its course, and has grown stale and uninspiring; and so the intolerant zeal of a new ideological fashion trend is doing its worst to tear down the former intolerant religion (Christianity) and even rational objectivity itself, which made the west great: mathematics, classical music, and proper English are now racist, and objectivity and empiricism are tools of white patriarchal oppression. Even so, these new fanatics have nothing realistically resembling a moral high ground, other than a demand for communistic equity, and nothing realistic to take the place of the old paradigm. It is even apocalyptic in a sense, reminiscent of the early Christians, in its exploitation of claims that the end is near because of climate change (brought about by straight white men of course), with unquestioning obedience to the dictates of the new propagandists being your only hope for survival. (Oh, also, wear the mask.)

A new system may be in the works already, in fact is seems pretty much inevitable at this point, and upheaval and the breakdown of an older traditional society hastens not only the advent of a new religious paradigm but the advent of the miraculous and paradoxical. The advent of a new system might be right around the corner; but of course relying on such an event is a ridiculously bad strategy. Hope is simply not a strategy. On the other hand, if old modernism somehow survives, it will have to be reinvigorated with some new inspiration, and a radically new approach.

In retrospect, we should avoid the mistakes of our forebears who allowed all genuinely European religions to die. Our best bet, it seems to me, is the common sense of the majority, who can see plainly enough that the new left endorses every sort of moral degeneracy and dysfunction, and hates its own culture. (The early Christians hated their own country and culture also, but at least they had some solid moral principles, even if they were too often ignored.) We should see the danger of the end of modernity clearly, but without self-defeating pessimism (“black pill”) or ungrounded optimism (“white pill”). But we should also take active measures, like by organizing; by deeply believing in something, and standing by genuine principles; by acknowledging that standing for truth is more important than keeping one’s head down to avoid trouble; and by seeking something more satisfying and more real than superficial rubbish spoon-fed to the gullible masses. Do not be demoralized, so that what you represent is not demoralized. The new advent may not be orthodox Buddhism, or Christianity, or anything at present traditional, but if we are fortunate, and help bring it about, then it will be some sort of valid Dharma, something conducive to the transcendence of the madness and illusion we call the world. 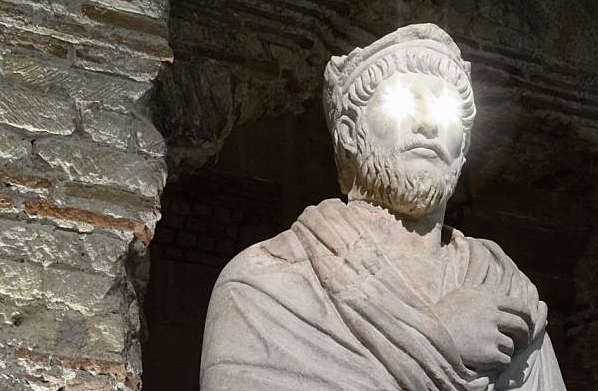