Mara the Buddhist “Devil” vs. Satan the Abrahamic One (Bitch Fight)

Namuci approached, speaking compassionate words: “You are thin and ill-looking, and death is near to you. You are a thousand parts death and only one part life. Live, good sir, life is better; live and do acts of merit. If you live the holy life and perform the fire sacrifice, you will accumulate much merit. What do you want with striving for enlightenment?” —Padhāna Sutta, verses 2-4

All sorts of comparisons have been made between Buddhism and Christianity. Some entire books have been written on the idea that the original founders of the two religions taught much the same thing, or even exactly the same thing. (I may compare and contrast the two great founders some other time, but I’m not going there now. Let’s just say that there were some similarities, and some overlap.) Clearly the very fact that the two religious systems were devised by humans will ensure some similarities, some based on timeless human archetypes—like the Betrayer among the close disciples, Devadatta Gotama in Buddhism, Judas Iscariot in Christianity.

Another universal archetype common to both systems is the supernatural Tempter: Māra the Buddhist “devil,” and of course Satan. Both are superhuman beings, with superhuman powers, both are identified as evil, and both are dedicated antagonists to the respective founders of the religions, and to their followers…but there are considerable differences, and in some respects they are virtual opposites.

One notable similarity between the two, before moving on to the more intriguing differences, is that both Māra and Satan were adapted from earlier traditions. Māra was evidently known to pre-Buddhist Indians; and although I am no expert on very early Vedism and its pantheon, I have read that there was in a fact a god or yakkha (in Sanskrit, yaksha, a kind of powerful spirit) named Māra, who represented not only death—Māra literally means “killing” or “murdering,” derived from the same Proto-Indo-European word as the English “murder” and “mortal”—but also sensuality and sex. Māra may also be in part an adaptation of the Vedic Yama, a god of death, and also Kāma, a god of sensuality, pleasure, and romantic love, corresponding roughly to the Greek god Eros. But it appears that Māra plays a much larger role in Buddhist cosmology and ethics than he did in pre-Buddhist Vedic tradition. He seems to have dropped out of modern Hinduism, being more or less redundant, with Yama and Kāma enjoying much more publicity.

The evolution of Satan is much better known, at least to me. He receives hardly any specific mention at all in the Old Testament, outside of his co-starring role in the Book of Job, and despite the meaty position he holds in the New Testament, with everyone and his sister being possessed by demons. Aside from that one Book of Job, he is mentioned briefly in the First Book of Chronicles (1Ch 21:1), and in the minor prophet Zechariah (Zec 3:1,2), and that’s it. He is not mentioned by name in Genesis, because the villain there is simply called a snake—because at the time the book of Genesis was composed, Satan hadn’t been invented yet. The three books of the OT that mention Satan specifically are apparently relatively recent, reaching their final form around the time of the Babylonian Captivity or a little later. This makes sense, because Satan was evidently adapted from the Persian Ahriman, the dualistic god of darkness and sin, opposed to Ahura Mazda, the god of light and goodness, in the former Persian religion of Zarathustra.

The Babylonian Captivity of course was a severe blow to the early Jews, and inspired some increased introspection among them, and also may have had some sort of civilizing effect on them. Throughout most of the OT, Yahweh is a rather bloodthirsty and savage God who takes full responsibility for the punishments and sufferings of this world, much as is still the case with Allah. But the Jews eventually saw the incongruity of a good God being responsible for so much badness, so much seeming cruelty and callous indifference, so they borrowed Ahriman from the ancient Persians, among whom they were living. Satan apparently began his career among the Jews as a servant of God who took care of the “dirty work,” or at least was a lesser superhuman being who was morally ambivalent but had no choice but to acknowledge God Almighty as his superior. Later, as the troubles of the Jews continued into the Hellenistic Age, they became more apocalyptic, which resulted in the schismatic sect of Christianity becoming more apocalyptic still, much more so than Buddhism of course, with a much more rudimentary concept of karma, and so Christianity in particular was more in need of an otherworldly (but still worldly) villain.

One superficial resemblance between Māra and Satan is their multitude of names—Lucifer (“Resplendent”) and Beelzebub (“Lord of Flies,” formerly a god of the heathen Philistines) are just two of the many aliases for Satan, with two for Māra being Namuci (considered by the commentarial tradition to mean “Enemy of Liberation”) and Kanha (“The Dark One”). In some cases, as with Beelzebub, these may represent the coalescing of “wrathful” (or just bad and wrong) superhuman beings over time, as the predominant cosmic villain evolved.

Despite some similarities, there are some striking differences between these cosmic villains. Māra, for example, lives in the highest heaven of the Sensual World (the Kāmaloka), in the Heaven of Those Who Delight in the Creations of Others, with his three voluptuous daughters, in an unimaginably magnificent palace, surrounded by celestial pleasure gardens. Satan, on the other hand, if we can believe Dante, is chained at the bottom of the lowest pit of hell, chewing on Judas and Brutus with two of his three mouths (Brutus has definitely had his ups and downs in mainstream public opinion), with the third mouth waiting to start chewing Antichrist, Mr. 666. Presumably he relies on diabolical henchmen to do his will since the advent of Christ and his imprisonment, plus maybe he somehow manages to break free from time to time.

A much huger difference, in some respects a virtual opposition, is that if Māra can’t tempt you to do anything bad he’ll lure you into doing good—because all planes of phenomenal existence are samsaric, and Māra is the de facto god of Samsara, including the highest heaven realms. In one famous metaphor even Mahā Brahmā, the highest God to the proto-Hindus, is resting in the palm of Māra’s hand. (Satan also is sometimes referred to as lord of this world, but certainly not of heaven, where God Himself allegedly sits.) Mainly Māra is concerned with keeping everyone in his realm, under his sway. Thus he tries to tempt and distract the saintly from striving for enlightenment by urging them to perform meritorious deeds, as in the Padhāna Sutta of the Sutta-Nipata—if, that is, he can’t simply sow doubt in their heart or otherwise corrupt their saintliness and subtlety of spirit. But in the Old Testament especially, Yahweh Himself is the God of Samsara! Some early Christian and Gnostic sects actually believed that the Hebrew Yahweh was not God but Satan, or at best some inferior Demiurge; and considering his conduct in the Old Testament this is not surprising. Yahweh is the Lord of this world, this Samsara, with no real concept of transcendence, a worldly-minded angry deity thirsty for blood and offering worldly rewards to the faithful and obedient.

One other peculiar difference between Tempters is that Māra is really not so much an individual as a position. In Buddhism nobody is truly immortal, including the highest gods. They may live astronomically long lifetimes, but eventually they exhaust the karma that has them in whatever particular existence, and so they pass away from there and move on to the next. So after one Māra dies, he is simply replaced by another, in accordance with some mysterious cosmic need for a villainous Tempter of beings and unofficial Overlord of Samsara. Other deities like Sakka and Mahā Brahmā are likewise just occupying a role, and are eventually replaced by another, and then another, and then another, throughout eternity.

As a kind of illustration of this phenomenon, as well as a few other similarities and differences between Tempters, I will mention the truly bizarre (and relatively late, methinks) Māratajjanīya Sutta of the Majjhima Nikāya (M50). In this sutta Māra, in an attempt to pester and distract the venerable Mahā Moggallāna, enters the venerable monk’s belly. After driving Māra out of his belly ven. Moggallāna tells Māra that long ago, during the lifetime of a previous Buddha named Kakusandha, Moggallāna himself was a Māra called Dūsī, whose sister was Kālī, and with the present Māra in that life having been a different, lesser Māra, the son of Kālī. Thus in addition to the weirdness of all this, and the appearance of Kālī in the Buddhist Tipitaka, it shows that Māras, like devils, are reckoned in the plural, even though there is a main one who apparently holds the official position as cosmic Bad Guy.

Māra bears similarities to and differences from Satan AND Yahweh (alias God Almighty), but, more or less in conclusion to this comparison/contrast, I would point out that there is hardly any correspondence between the Buddhist Nirvana and anything scripturally Christian, aside from maybe a few allusions along the lines of “the peace that passeth all understanding.” I have been told that Roman Catholic theology, and some advanced Christian mysticism (derived in large part from Greek Neoplatonism), describes God or the Spirit of God as something utterly formless and ineffable; and even the Old Testament makes some crude movements in this direction with its occasional refusal to stick a name on Him (though obviously it sticks a gender) or describe his appearance. But Christian dogma has fettered its understanding of the Absolute with its notion that God, the Highest Principle, has preferences, desires, and emotional moods, and that even the most advanced saints can attain no higher than the beatific vision, being in the presence of God, but never merging with Him.

So the two great religions of Buddha and Christ have similarities, but Christianity’s reliance on the worldly crudeness of Old Testament Judaism and associated apocalyptic movements have shackled it, and keep the orthodox bound within the realm of Māra, sometimes known as Jehovah.

Anyway, I have never felt the need for Māra in my Buddhist universe, considering that he can’t possibly do anything to me that is not in accordance with my karma anyhow. He seems utterly redundant and superfluous in a world governed by karma, and we humans obviously do a good enough job of making problems for ourselves. 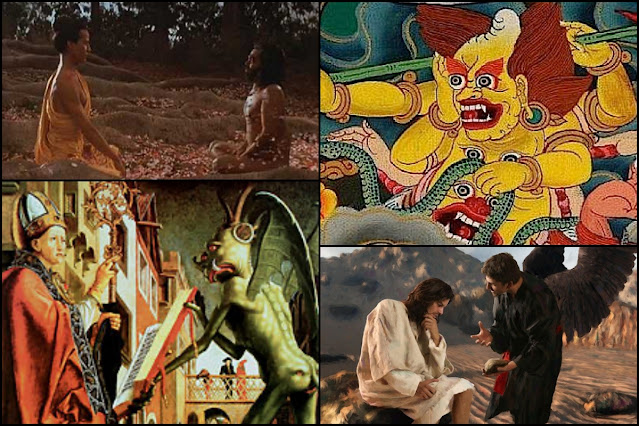