Joshu asked Nansen: “What is the path?”

Joshu asked: “Can it be studied?”

Nansen said: “If you try to study, you will be far away from it.”

Joshu asked: “If I do not study, how can I know it is the path?”

At these words Joshu was enlightened.

In spring, hundreds of flowers; in autumn, a harvest moon;

In summer, a refreshing breeze; in winter, snow will accompany you.

If useless things do not hang in your mind,

Any season is a good season for you.

Well, by golly, I have been busy and distracted as F*CK over the past few months. Some of you are acquainted with most of the reasons, and if you aren’t acquainted that’s too bad because I won’t elaborate on them here. One relatively new source of busyness, distraction, and just plain time and energy consumption is the fact that I have recently joined the working class, and my new job involves quite a lot of lifting and toting rather heavy materials, plus staying on my feet for several hours per day. This caused some considerable exhaustion as my body slowly got used to the new exertion, and I remained very fatigued for weeks…until very recently when I tried a radical new experiment: I went to bed early and got a full eight hours of sleep. After that I felt a little soreness still as my tendons adjust to the new work, but otherwise I felt fine. Strange how simply getting a few hours more sleep can make such a difference.

I notice that two parts of my body that are adjusting the most slowly to my new active lifestyle are the ligaments in my left hip and along the inside of my left knee; and I am pretty sure that the cause of this is that I sat for hours every day in the full lotus position for many years. The full lotus puts considerable torque and stretch on your legs as they assume the pretzel shape, and it has evidently weakened the leg of a western man who otherwise is not extremely limber of limb by birth. So be careful if you do yoga asanas. Even so, I trust that I will fully recover from chronic yoga stress to my leg.

Anyway, one symptom of my chronic distraction and fatigue lately is that I have thoroughly spaced off keeping up to date on my video links on this blog. So, today I compensate for that by shoving a boatload of them at you. I hope even regular followers of my stuff haven’t seen all of them yet, so that this post will not be redundant.

You may notice that the content of my videos has changed considerably since I returned to the state of an outwardly normal (?) human. Though Herr Brian is still my good friend, my commotions and his recent emphatic emphasis on space aliens have caused me to appear very infrequently on his show—and it used to be that appearances on the Brian Ruhe Show were almost my only foray into video content creation. But now I have begun interviewing others, participating in group discussions on other platforms (some of them with Brian, whom my sweetheart amiably calls BDawg), reading some of my favorite Buddhist texts, and also giving the occasional freestyle Dhamma talk. This will presumably continue, plus Brian and I agree that an appearance on his show is long overdue. I’m reading Richard Dolan’s Alien Agendas to prepare.

Aside from work and commotion, making the transition from monk to layman has been harder than I expected, in ways I never expected. Thirty years as a solipsistic recluse has instilled in me habitual ways of looking at the world, and at people close to me, that do not translate well into being a healthily functioning member of non-reclusive society. Despite the Buddhist teaching of No Self, I need to work on cultivating more of a sense of “us” now, not just “phenomena are arising.” That is a major part of my new spiritual practice. And of course, regardless of whether we wear a brown toga or work pants and a shirt, everyday life IS Dhamma practice. That is a common and serious mistake that even many faithful religious people make: separating Dhamma practice from everyday life. Ultimately, it’s all spiritual.

This is a long one with lots of deep philosophical questions, so go pee before you start watching. Questions include: how to ordain as a monk in Asia, financial support, indulgences and purgatory, the universe arising out of nothing, magick, Dhamma as the fourth Satipatthana, emptiness of aggregates, insanity in monastics and laypeople, qualifications for being a teacher, made-up religious mythologies, determination in Buddhism, sex in society, me being autistic, correcting bad karma, dealing with clown world, right livelihood, masturbation, monks riding horses, enlightened beings after death, the ethics of sterilization and eugenics, collective karma, my upcoming books, biofeedback meditation, natural and supernatural states, love and light in Buddhism, Semitic and anti-Buddhist Gods, monastic rains retreats, use of entheogens, and the differences between Buddhist practices in Thai, Burmese, and Sri Lankan traditions. With the mind-warpingness of the Middle Way haunting the whole show. (2:15:35)

Questions include: non-Theravadin Buddhist philosophers, homosexuals in the Sangha, ghosts, insane monks, the Four Noble Truths, the idea that “we are all one,” preparation for death, the ethics of video games, the ethics of giving, “Makyos,” a good life with bad karma, stagnant meditation, conscious germs, enlightened gods and ghosts, how to make a kasina disk, dependent co-arising, nimittas in meditation, Dharma teacher diversity hires, morning amazements after disrobing, scriptural literalism, how karma works, reincarnation, and whether one can be a Buddhist without believing all of it. (1:48:59)

Q&A #13: From Transgressive Buddhism to Forgiveness

Questions include: transgressive Buddhism, dissociation, enlightened females, heretical Buddha images, prophecy, dual-religion Buddhists, who is enlightened?, Marpa the Translator, corruption in Buddhism, ghosts, karma and non-action, sex, enlightened extinction, nihilism, the blowing out of Nirvana, actions with no actor, greedy Tibetans, the origin of the Order of Buddhist nuns, future videos with Brian Ruhe, the true stream enterer, and forgiveness of “sin.” With some experimental cartoon effects. (1:40:37)

Q&A #14: from the Unconditioned to Karmic Decision Making

Q&A #15: from Buddhist Prohibitions on Magic to Edgar Cayce

Q&A #16: from Abhidhamma to the Paranormal in Buddhist Asia

Ship of Fools Cast #18: Non-Duality & Non-Self: A Non-Talk with Pannobhasa

In which we discuss a multitude of philosophical and personal issues with our friend Mirror of Emptiness, formerly known as God's Own Fool, but apparently God fired him. (1:46:10)

Interview with a Neoplatonist

Numa is possibly the only practicing Neoplatonist that I have ever met, which is very interesting to me since Neoplatonism was for a time the main rival to Christianity in late antiquity. Numa and I discuss what Neoplatonism is, how it developed, what sorts of spirituality existed in the west before Christian times, and what is the likely successor to Christianity, Scientific Materialism, and "pop" pseudospiritual fashion trends in the postmodern west. (He goes by the name of "Fiery Logos" on Minds.com, by the way, and is soon to start a new philosophical blog. Maybe he’s started it already.) (1:09:31)

How to Be a Buddhist in the West: an Interview with Bhante G. Varapanno

Bhante and I discuss the peculiar difficulties of being a seriously practicing Buddhist in the non-Buddhist west. (1:22:24)

Talking about BUDDHISM with Aureus Channel and Ship of Fools

Brendan of the Aureus Press is an eclectic sort of artist/esotericist who has taken an interest in Buddhism. He didn't know enough about it to feel confident with his question-asking, so he recruited SOF Cast to participate in the interview. The result is us talking about many basic aspects of Buddhism, plus a few non-basic aspects. (1:31:40)

Dharmic Solutions before the SHTF

The 40 Subjects of Meditation in Theravada Buddhism

A discussion of the standard list of 40 orthodox meditation techniques, as detailed in the commentarial tradition. (55:20)

The Lokayatika Sutta: A Cosmologist Meets the Buddha

A strange and important ancient Buddhist text, translated into English with some commentary. The emphasis of the discourse is the inscrutable Buddhist Theory of Everything, Paticcasamuppada, with some bearing on the issue of the existence (or nonexistence) of the human soul. Also some buzz kill discussion on authenticity in ancient Buddhist texts. (27:27)

The Godhika Sutta: on the Buddha, Māra, Enlightenment, and Suicide

A very strange discourse from the Samyutta Nikaya, about a monk who becomes enlightened while committing suicide, and the efforts of Mara the Evil One to stop him, and then to find his consciousness after he dies. With commentary by Pannobhasa. (24:40)

The Tibetan Book of the Great Liberation

This is a reading of one of my favorite Buddhist texts, and my absolute favorite Tibetan Buddhist text. It is attributed to Padmasambhava, who is considered to be a great patriarch of Tibetan Buddhism. There is minimal commentary to this one because it's a real mind-blower and I don't want to water it down with my own verbiage. Also, instead of simply posting a video of me sitting here reading, I experimented with my rudimentary video editing skills and used some video footage of my last formal meditation under the pavilion at Kusalakari monastery, back when I was still a monk (like back around April of 2021). (36:04)

The Purabedha Sutta (or Discourse on Before the Breakup)

A reading of a strange, important, and very ancient Buddhist text. In a forest. (9:46)

The Magandiya Sutta, a reading, with brief commentary, by Pannobhasa

Another strange and mind-boggling ancient Pali Buddhist text from the Sutta-Nipata, read in a forest in North Carolina. (8:53)

A consideration of the miracle (or at least wonder) of coffee, with cream. (0:36) 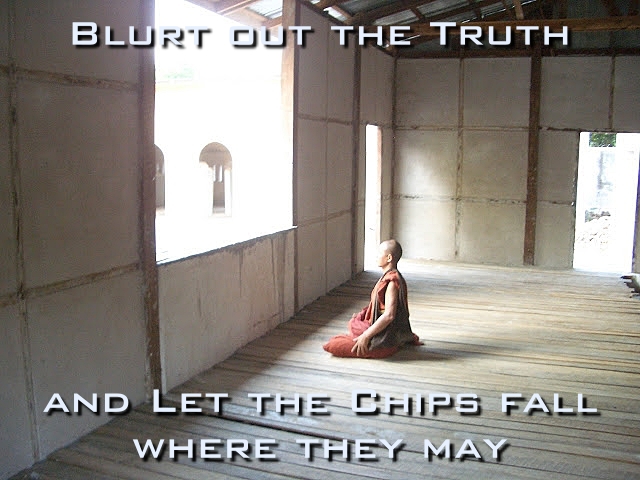