Karmic Minimalism in the Secular West

The Zen master Hakuin was praised by his neighbors as one living a pure life. A beautiful Japanese girl whose parents owned a food store lived near him. Suddenly, without any warning her parents discovered she was with child. This made her parents angry. She would not confess who the man was, but after much harassment at last named Hakuin. In great anger the parents went to the master. “Is that so?” was all he would say. After the child was born it was brought to Hakuin. By this time he had lost his reputation, which did not trouble him, but he took very good care of the child. He obtained milk from his neighbors and everything else the little one needed. A year later the girl-mother could stand it no longer. She told her parents the truth—that the real father of the child was a young man who worked in the fish market. The mother and father of the girl at once went to Hakuin to ask his forgiveness, to apologize at length, and to get the child back again. Hakuin was willing. In yielding the child, all he said was, “Is that so?”

Yesterday when I was walking to work I was considering how to explain my former monastic/reclusive lifestyle to co-workers. Because my mind can hop around like a monkey moving from branch to branch this led me to considering one of the basic points of a Theravada Buddhist monk’s lifestyle: karmic minimalism, or simply creating as little karma as possible. Many people, especially in the west, do not realize that a Buddhist monk, or at least one following the very ancient tradition of Theravada, is not only supposed to avoid evil but also is supposed to avoid good—he is avoiding any karmic action, good or bad, that reinforces his existence (or seeming existence) in Samsara. Being good and going to heaven is still being stuck in Samsara. It’s just a better version of the Matrix, of Plato’s cave.

A lot of the seemingly strange behavior of ancient Indian Buddhist monks is derived from this objective of minimizing karma: having no family, no caste, few friends other than fellow monks, no position in society, no money, very little property, no slapping of mosquitoes, no digging the ground, and on and on. It is supposed to reduce attachment and also karma. An emphasis on reducing karmic action was fundamental to ancient north Indian spirituality, going all the way back to the prehistoric Indus Valley Civilization; although the mainstream Vedic Brahmanism of the Indo-Aryans retrogressed from that for almost a thousand years.

Although the behavior of early Buddhist renunciants may seem extreme to people nowadays, other sects in northern India took it even farther. Some Brahmin “matted hair ascetics” became so low-impact with regard to their surroundings that they fed only on fruits that had naturally fallen to the ground in the forest, and other ownerless and “karma-free” foods. Some Jains and Ajivakas would silently beg for food in the streets, as did the Buddhists, but they had some strange prohibitions; for example they were not allowed to beg where there were lots of flies buzzing around, or a scroungy dog lurking nearby, as accepting food there might cause some other being to go hungry—thereby generating extra karma. One of the innovations of Gotama Buddha is his interpretation of karma as primarily a mental state, so that Buddhists didn’t have to worry about inadvertent inconveniencing of insects etc., but still the Buddhists followed the ancient Indian tradition of keeping the generation of karma to a minimum.

Which caused me to think, while still walking to work, how keeping karma to a minimum would work in the western world.

Obviously, the rather extreme methods of ancient India would not work very well in the modern west. First off, begging for food silently in the street could cause more karma instead of less, because it is so unusual that it could provoke reactions and make karmic “waves.” Simply living under trees wouldn’t work because all trees are owned by somebody. Wandering around homeless has similar complications. Being a recluse not using money would be possible only for people already wealthy enough to do it on their own land, criminals stealing their food and other necessities (as one or two “outed” hermits recently in the news have managed it), or else have spiritual connections, or just indulgent friends, who are willing to support personally such a lifestyle. But much of Indian-style karmic minimalism, maybe most of it, is so foreign to western culture that it could backfire, resulting in more karma, not less, due to the friction it causes with the surrounding society.

So any attempt at karmic minimalism presumably would require an attempt at making a seamless blend of the minimalism and the culture. Bizarre ancient Indian practices are hardly an option under most circumstances. I suppose a karmic minimalist could live among homeless people in one of the many homeless camps that have arisen in America relatively recently; but then one would be living among drug addicts and mentally ill people (as well as the simply unfortunate) who would not be good company for most spiritual seekers. As the Mahā Mangala Sutta states, Blessing Number One for a spiritual seeker (or for anyone really) is non-association with fools. Maybe a spiritual person could live there in order to help the unfortunates there, but then one would no longer be a karmic minimalist, as helping others in such a way would produce merit, or good karma, which is to be avoided.

So what kind of karmic minimalism would seamlessly blend with modern western culture? Personally, I have renounced radical karmic minimalism since I stopped being a monk, or even somewhat before; but one possibility that remains would be celibacy and relative (though not absolute) solitude. At least that sort of minimalism (minimalist for those who can swing it, because burning with frustrated lust or simple loneliness isn’t very minimalistic either) is still a viable option in the west, and for the most part is invisible in public anyhow.

Another possibility is relative poverty, which is pretty basic to a number of religious traditions, even though most followers of those traditions conveniently ignore the idea. But one idea I had while walking to work at a metal shop is that, even though not working for a living may not be a viable option in the west, even so obtaining not only Right Livelihood in the Buddhist sense of an honest job that doesn’t harm anyone, but a simple job that does not stand out and make much of an obvious impact, could be a step in this direction. Clearly, helping OR harming others in any obvious way is still generating karma, assuming that the generator is not enlightened already, and so a meditative job working on an assembly line or trimming hedges or cleaning swimming pools or buffing floors or some such might be preferable, in this sense, to being a Peace Corps volunteer or a doctor or firefighter. From a karmic minimalist point of view, low impact is the next best thing to no impact.

It seems to me that a karmic minimalist in the west, one who doesn’t have wealth to rely on or indulgent friends with wealth to rely on, would adopt a lifestyle of anonymity, working at a humble and relatively inconsequential (though honest and low-stress) job, wearing normal clothing and not standing out, and being outwardly, on the street and in the shops, a bland, greyish member of the herd of normies. Inwardly, on the other hand, the minimalist would be keeping thought itself to a minimum, meditating while doing his inconsequential and more or less solitary job, refraining from indulging in reactions, positive and negative, and maybe even dwelling quietly in divine Bliss.

This is the solution I came to regarding how a karmic minimalist would live in the west, and to some degree I can relate to it, and I naturally adopt a few of the ideas and have incorporated them into my new life in the west. But again, I am no longer a karmic minimalist, and have accepted the idea that a person living in the world has obligations towards society and should cultivate some sense of civic duty; also, the spiritual path of a worldly person pretty much necessarily involves some non-saintliness, and thus requires some good old-fashioned classical stoicism with regard to accepting, with as much fortitude and equanimity as one can muster, the karmic fruition of one’s karmic non-minimalism. I think this point is essential to seekers and practitioners in the west: Karma is real, and you are generating lots of it, so be prepared when it comes back to you. And remember that it’s not bad situations that cause suffering, it’s the inability or refusal to accept them. It doesn’t matter what it is: if you accept it, it’s not a problem. And it doesn’t matter what it is: if you won’t accept it, it’s a problem. And patient acceptance of the way things are is probably the best karmic minimalism there is, now in the West, or in ancient India, or anywhere else. 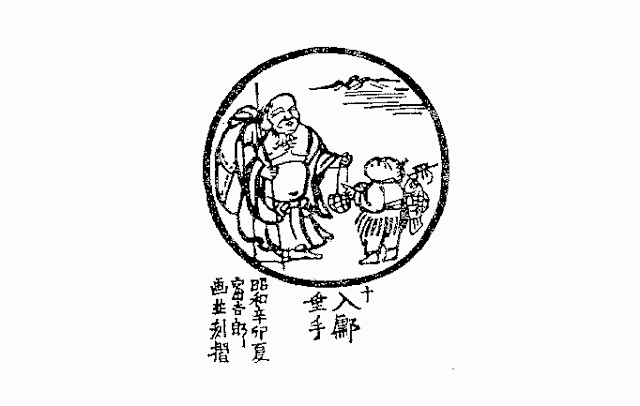