Nan-in, a Japanese master during the Meiji era (1868-1912) received a university professor who came to inquire about Zen. Nan-in saved tea. He poured his visitor’s cup full, and then kept on pouring. The professor watched the overflow until he no longer could restrain himself. “It is overfull. No more will go in!’” “Like this cup,” Nan-in said. “You are full of your own opinions and speculations. How can I show you Zen unless you first empty your cup?”

For years I have had in my mind a little story that I imagined while living in a cave in Burma. However, I feel unqualified to write it as fiction, as a finished short story. My few attempts at fiction, especially characterization, have been very unsatisfying, partly, I guess, because I have spent so long as an inwardly-turned recluse and have had less intimate exposure to a wide variety of personality types than most people my age, or anywhere close to my age. In other words I'm not a people person. Or maybe I just don’t write fiction well, or to my own satisfaction, for other reasons. Maybe I’m just fussy. I dunno.

Anyway, there is still this story in my mind, which I will describe without trying to fix it up into passable fiction. It’s more a matter of a guy recounting a tale than a professional author writing one. Also it has some significance which may convey a valuable message.

The story involves time travel, which some people would say is not good science fiction. I am willing to adopt an approach taken by one of my favorite science fiction authors when I was young, Larry Niven, by assuming that real time travel is impossible, that is traveling back along one’s own timeline, thereby allowing such impossibilities as the grandfather paradox in which one causes the death of one’s own grandfather, thereby rendering impossible one’s own birth and thus the killing of the grandfather in the first place. Let’s say that one is moving through a vast array of possibilities/probabilities, which appears to be time travel. One could kill one’s own grandfather that way and simply prevent an alternative self from being born in an alternative world—paradox avoided.

So anyway, there’s this time machine, see, and the government, in collaboration with the university department where it was developed, ostentatiously arranges for a trip back in time. The Christians have already caused enough uproar that Jesus is out for a visit, various groups have raised objections to visiting just about every other historical figure and significant event, so finally it is decided to visit northern India during the lifetime of the Buddha, as it is sufficiently neutral to most westerners, and acceptable to most Buddhists.

The number of people able to go back is limited to four, so an all-star cast is selected. First there is a very reputable Burmese Sayadaw. Then there is a professor of Buddhist Studies at one of the big, prestigious universities, a prolific author of translations and critical essays discussing the evolution of Buddhism and what the historical Buddha really taught—filtered through non-Buddhist academic common sense. Also there is a woman with a name like Sylvia Horowitz (whether she’s a Jewish lesbian or not is irrelevant), a popular Vipassana teacher at one of the most luxurious and prestigious elite meditation resorts, and author of the bestselling volume Awakening the Buddha Within You: Enriching Your Life with Mindful Insight. Finally there is the technician who attends to the machinery. He is a quiet young man, single and rather a loner, who volunteered for the job after the other technicians expressed some hesitancy to take a risk that they and the government knew of but which was concealed for reasons of publicity. The other people at the lab tease him because he volunteered for such an arcane and potentially dangerous mission; they say he is a “mystic,” or a seeker looking for the solution to a problem that does not exist. He accepts their trolling with quiet, serious good humor.

So the day arrives for the group to go back in time, and the famous authoress Sylvia Horowitz calls in sick at the last minute. She suddenly is having all sorts of strange health problems and feels very unwell. The other three, undaunted, go back in time to the Ganges Valley, around, let’s say, 480 BCE.

One of the first difficulties met by the group is that the venerable Sayadaw, to his confoundment, cannot communicate with the natives in their native tongue, which is not exactly Pali, and is pronounced very differently from the way the Sayadaw pronounces Pali. The Buddhist Studies professor is greatly amused by this, explaining to him for the sixth time that Pali was really not the language spoken by the Buddha anyway, but is an artificial Prakrit developed over the course of a few centuries as a kind of ecclesiastical lingua franca. His is pleased that his own guess as to what language was spoken in the Buddha’s time was correct enough that he can communicate with the natives. He takes notes on this phenomenon in a notebook, with great satisfaction at the idea that he’ll publish something really big, possibly even a book. He listens carefully to the noun declensions being used by the natives.

Finally they arrive at the place where the philosopher Gotama is said to be residing. They are directed to a tree at the center of a certain park, where they find a rather thin, tall ascetic sitting serenely, wearing what are essentially rags, with some followers sitting around him. As the Sayadaw approaches he is indignant to find that this man looks pretty much like any other man: he is not 27 feet tall, he does not have any obvious marks of the superior man (aside maybe from long fingers and toes), and furthermore the ascetic is rather scruffy looking, with two weeks’ growth of beard, no knob on top of his head, and furthermore he has a fly crawling on the side of his head. The Sayadaw becomes quite upset, refuses to believe that this is the real Buddha, insists that the whole trip is a sham, and stalks off to try (in vain) to ask some of the other people there where the REAL Buddha might be.

The professor, suave and urbane, smilingly approaches the ascetic, bows self-consciously and somewhat awkwardly, and begins speaking to him in Prakrit that he is constantly improving. Mainly he asks leading questions to confirm some of his pet theories concerning the evolution of Buddhist doctrinal terms. The Buddha (for that’s who he is) answers calmly and politely, but can see clearly enough that the professor already has his mind full of ideas and is not ready for anything more.

Finally, after 45 minutes or so, the professor politely excuses himself, because he also wants to meet Mahavira and Makkhali Gosala and time is limited. He strolls away to meet the Sayadaw, who has been sulking under a tree in the distance. Eventually they both realize that the technician is missing. When they look back they see that he is lying on his face before the Buddha, and the Buddha is gently stroking his hair, speaking to him in gentle, reassuring tones. The professor and the Sayadaw return to urge the technician to get going, as it’s time to go, but he ignores them. They become more stern, even irritated, but the technician explains to them that the machine is in good working order, only a few keys need to be pressed to return, which he explains to them, and then he informs them that he is staying. The professor especially becomes insultingly condescending in his insistence that the foolish young technician “think sensibly” and return to the future, that the philosopher’s charisma is in danger of luring him into making a decision he is sure to regret, and so on, but the “foolish, stubborn” technician, the young “mystic,” does little more than sit up near the Buddha and ask for refuge. (He doesn’t speak ancient Prakrit, but the Buddha somehow seems to understand everything he says.) The other two men, both much greater authorities on Buddhism than him, walk away shaking their heads, finally in agreement on something: the young man is a deluded fool. 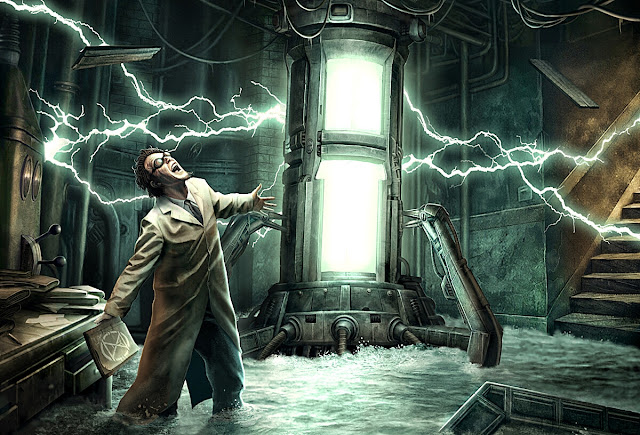