Some Notes on Tradition vs. Innovation in Dharma

The letter killeth, the spirit maketh alive.  —Paul of Tarsus (while innovating Christianity right out of Judaism, the religion of its founder)

Recently I participated in a video discussion on the issue of tradition vs. innovation in Buddhism. The other two participants in the discussion were venerable Ajahn Punnadhammo and my good friend Brian Ruhe. I would like to point out that ven. Punnadhammo is a brave man for consenting to do videos with the likes of Brian and me—not because we are dangerous, but because apparently most western Buddhists, or people who calls themselves such, take a very dim view of the likes of Brian and me, as can be seen in a strange article that I found just today, entitled “Nazi Buddhists,” on Substack.

Anyway, that discussion was the first of three that we recorded that evening, and I was just warming up, and so afterwards it occurred to me that I could have said much more on the subject. Those of you who are interested in the dilemma of adhering to an ancient tradition or modifying it to suit the times, or just one’s own inspiration or preference, should perhaps watch the video before continuing with this blogwise appendix to it.

Personally, I am ambivalent on this particular issue. Strict adherence to the Pali Canon and orthodox Theravada Buddhist tradition is viewed as pretty much mandatory in Burma, where I spent more than twenty years; and so I saw many of the shortcomings of such an approach. On the other hand, I have also spent a fair amount of time in the west watching what westerners are doing to Theravada, and so I have seen some really grotesque shortcomings of that approach also. The correct approach, it seems, is some sort of middle path between the Scylla and Charybdis of eastern dogmatism and western revisionism.

One important shortcoming of dogmatism that I didn’t emphasize in the video is that, if one strictly adheres to a scriptural interpretation of the Way, then one is compelled to memorize the thoughts of someone else; one isn’t even really required to understand it. This is how Buddhist education, and education in general, is conducted in a traditionalist environment like Burma/Myanmar: students memorize by rote whatever it is that they are “learning,” and so long as they can parrot the words that they have memorized on demand they are considered to “know” it. But parroting someone else’s words does not require any knowledge other than the memorization of the dogmatic formulation. For example, monks in Burma memorize the 12 links of the standard formula of paticca-samuppāda, or dependent co-arising, the Buddhist “theory of everything,” and think that they know it. If asked to elaborate on the formula they just recited, they will probably just recite what the commentary says. In my opinion most of the people who explain paticca-samuppāda by merely reciting orthodox formulas from books really do not understand it. It may be that the monk or monks who came up with the orthodox explanation in the books didn’t really understand it either.

Even so, unquestioning dogmatism is still superior by far to the radical revisionism perpetrated on Buddhism by the political leftists of the west. Some of them even go so far as to accuse traditionalists of being fascistic reactionaries because they resist the injection of all leftist talking points into Buddhism to the point of supplanting the original teachings. Most western lay Buddhism, as I have pointed out countless times, is really just political and social leftism with a little Buddhism added for flavoring. It hasn’t always been this way, but the trend really took off back around 2015. And strangely, even intelligent, educated western leftist Buddhists are oblivious to the fact that “Dharma” is becoming little more than obsessing over “diversity and inclusion” in the Sangha (that latter term having been redefined by secular western Buddhists), climate change and Greenism, and leftist/globalist politics in general.

But the fact remains that unquestioning dogmatism is not what the Buddha himself endorsed. In fact he warned against it. The Atthakavagga of the Sutta-Nipāta warns continually against clinging to ANY view, not just the list of 62 wrong ones. As one of the texts of the Atthakavagga says:

Indeed, not easy to guide is a dogmatist [nivissavādī] who is setting before him a contrived view. Claiming the Good to be there, in what he is dependent upon, he is a proclaimer of “purity” who has seen “reality” there.

A dogmatist is only as good as his dogma. He can study it for years and totally master it, being able to recite it backwards and forwards; but so long as he doesn’t question it, so long as he tries only to verify it and not to see IF it is really true, for that long he is trapped in mere beliefs, and not even really his own beliefs but the beliefs of someone else. This applies not only to Buddhist scholars of course, but to anyone in any field, including western politics.

On the other hand, as I pointed out in the video, innovation, or rather relying upon one’s own inspiration for one’s understanding of Dharma, really works only with adepts, especially those who have lived the traditional Holy Life conscientiously and well. Some meditation master who has practiced the Buddhist path for decades may make some valuable modifications to the established dogmatic system (consider Nagarjuna, or the medieval Chinese Zen masters); but when indoctrinated leftist academics, say, who may be lesbian feminists besides, and who have practiced actual Dharma only superficially and for a relatively short time, try to revise Dharma to better suit their agenda, the results, like random mutations in genetics, are more likely to be deleterious than beneficial. Better for a worldly layperson to be an unquestioning dogmatist than to drag an ancient tradition into the ditch along with liberalized Unitarianism, liberalized Methodism, liberalized “Yoga,” and liberalized Judaism—all of which resemble each other more than they resemble the original version of their respective traditions.

So I say that it is better to err on the side of tradition than to err on the side of innovation, or of relying on personal inspiration. But at the very least one should try to understand the key doctrines of one’s system in one’s own words, in one’s own way. One should do one’s best to make sense of what one reads or hears; and if one can’t make sense of it, then one probably shouldn’t be parroting that particular doctrine. Unquestioning dogmatism and performing rituals for no better reason than because it is established tradition is really a dead practice, especially if one is not a beginner; there has to be some serious enquiry, and some serious efforts to understand the meaning of what the Buddha (or whoever it is) originally said, what he meant, and to understand it in one’s own words—without however, straying too far from the words found in the tradition.

But there is a further complication to this whole issue, and it is one found in the Pali Canon itself. The complication is found in an obscure discourse of the Majjhima Nikāya, the Sandaka Sutta. This discourse is delivered not by the Buddha himself but by his disciple/attendant/cousin Ānanda Gotama—which may be evidence that it is a later addition to the texts and not “archaic Buddhism,” but nevertheless it is something that the Buddha himself could have taught, and evidently did teach in other words. At any rate venerable Ānanda addresses the issue of tradition vs. innovation, as follows:

And again, Sandaka, some teacher is a traditionalist, finding truth in traditions. He teaches a dharma by tradition, from somebody else's words handed down, according to a collection of texts [piṭaka]. But for a traditionalist, Sandaka, for a teacher who finds truth in traditions, some of it is well learned, and some of it is not well learned; and so [in some ways] he is right, and [in some ways] he is otherwise….

It would seem from this that the only alternative would be to fall between the two stools provided; but really there is a third option, an option which the Buddha himself apparently followed: and that is what may be called apophatic mysticism. The highest truth cannot be expressed in words, symbols, or concepts anyway, so through morality and meditative insight one sees the truth, ultimate reality, directly, without having to memorize anything or conceive anything. One simply sees what has always been there, or rather HERE. But again, it takes an adept to do this, and you will find precious few adepts in academia or at politically correct meditation centers and Dharma halls where diversity and inclusion outrank what the Buddha actually taught. 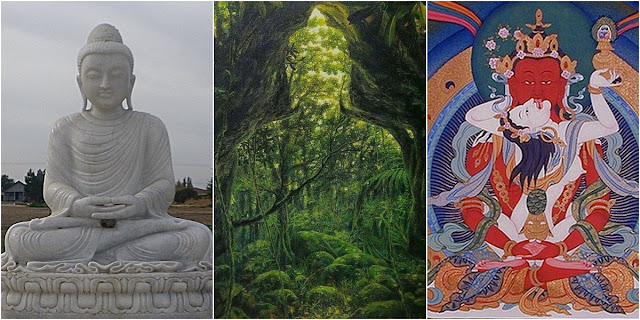