There is a natural aristocracy among men. The grounds of this are virtue and talents. —Thomas Jefferson

In Greenville, South Carolina where I currently reside, one of the main thoroughfares through town is called Wade Hampton Boulevard. Up until recently I was probably like pretty much everyone else in town and had no idea who Wade Hampton was. No doubt he was some kind of bigshot in this area, but he could have been the first mayor of the city, the founder, a civil war hero, or just about anyone. But then, very recently, I happened to watch a documentary on the War of 1812. I learned a few things from watching it—for example the largest-scale invasion of American territory in American history was perpetrated by the freaking Canadians—and to my surprise there was mention of a military commander named Wade Hampton from South Carolina. He commanded US troops in one battle against the British, Canadians, and Mohawk Indians, which he lost, and so he returned home in disgrace.

Hearing about Wade Hampton inspired me to do a little research. It turns out there were three historically significant Wade Hamptons: Wade Hampton I, Wade Hampton II, and Wade Hampton III. The first Wade Hampton served in the Revolutionary War as a Lieutenant Colonel. He was also the Wade Hampton who was repulsed at the Battle of Chateauguay in 1813, resulting in a failed attempt by the Americans to capture Montreal and conquer Canada once and for all. During the War he was one of the highest-ranking American generals, though he relinquished his command immediately after losing the Battle of the Chateauguay. He was a member of the Democratic-Republican Party founded by Thomas Jefferson, and served as a US Representative for South Carolina’s 4th district. He eventually became fabulously wealthy through land speculation, and was considered to be the richest plantation owner in the USA in his day, owning approximately three thousand black slaves. But he is not the Wade Hampton that is the namesake of Wade Hampton Boulevard.

Wade Hampton the Second was the son of Wade Hampton the First, and he also served in the War of 1812, as a lieutenant of dragoons. He evidently did not accomplish much of historical note (his main claim to fame, aside from being of the aristocratic and influential Hampton family, was that he was an aid to General Andrew Jackson at the Battle of New Orleans, plus being an obscure US Senator). He also is not the namesake of Greenville, SC’s Wade Hampton Boulevard, however.

The Wade Hampton of primary interest to us is Wade Hampton the Third (1818-1902), who was indeed a Confederate Civil War hero, later the governor of South Carolina, and after that a US Senator for the same state. He was born into an extremely wealthy and aristocratic southern family, possibly the wealthiest in the entire south. I was unable to find an exact number of the black slaves that he owned—one source claims he owned only around 350, yet another source claims that he had 980 black field slaves on just one of his plantations in Mississippi, not counting the household help.

Before the Civil War Wade Hampton III had an exalted reputation as a very aristocratic southern gentleman of the Old School. By this I mean that he not only was an aristocratic elite, he lived like one in accordance with pre-twentieth-century standards, like a medieval European noble, a traditional Indian Kshatriya, or for that matter several of the American Founding Fathers. The man was not only fabulously wealthy and socially cultivated, he was macho, an alpha male—unlike the cowardly wimp billionaires attempting to rule the world in much later times. He was a very skilled horseman, and one of his favorite pastimes was hunting bears. Much like the ancient Greek aristocrats who sought thrills by spearhunting wild boars, Wade Hampton III would occasionally kill his bear by plunging a knife into its heart as it was wrangling with a pack of baying bear dogs. In one old account he shot at a charging bear with his rifle but missed; the bear subsequently knocked him down and was trying to kill him, with a few dogs attached to its body distracting it, and Hampton pulled out his knife and stabbed the bear to death from underneath it.

This sort of thing would undoubtedly be viewed as coarse barbarism by sophisticated effete city dwellers nowadays; but it used to be, up until fairly recently in fact, that the nobility/aristocracy were the primary protectors of society. They were the professional warriors. Thus traditions of fearlessness and defiance of danger were taught to aristocratic men from a very young age…and the pre-War South upheld these traditions longer than did the North. The South was seen, especially by southerners, as a last bastion of the ways of Honor and true manly Virtue. Effete, decadent postmoderns might scoff or sneer at this, considering the likes of Wade Hampton or even George Washington to be little more than knuckle-dragging fascistic white supremacists; but this WAS the way the crème de la crème lived throughout most of history: Alexander the Great and Richard the Lionheart fought in the front lines despite being kings; many European and early American aristocrats fought mortal duels over matters of personal honor; ancient Greek gentlemen and many others fought dangerous animals with spears for fun; and fellows like Julius Caesar probably owned more slaves (white ones in his case) than Wade Hampton ever did. Setting aside the issue of keeping slaves, traditions of martial honor and courage, for example, helped to ensure that the leaders of society would at least be principled and strong. I personally would prefer the likes of Wade Hampton III as my leader and social superior than, say, George Soros or Jeff Zuckerberg.

Anyway, although he did not support secession when the War broke out, Hampton did his duty and enlisted as a Confederate private soldier when hostilities began in earnest. Largely because he was an illustrious gentleman he was promoted immediately to the status of an officer of cavalry, and he recruited, organized, and outfitted a brigade called Hampton’s Legion with his own funds.

Although Hampton had never been in the military he was fearless, intelligent, and an excellent horseman, and so he became a very successful cavalry commander. He fought in several important battles in the eastern theater and eventually was promoted to the rank of Lieutenant General and became Robert E. Lee’s chief commander of cavalry. He was wounded in action several times.

After the War Hampton’s plantations were in ruins due to the ravages of damn Yankees like Sherman, and most of the family’s wealth was gone. He and fellow commander Jubal Early, a distant relative of mine, embraced the Lost Cause theory of the War, insisting that the South fought for the just but doomed cause of maintaining the primordial way of Justice and Honor, and that the War was not really fought over the issue of slavery, although he did believe that blacks were racially inferior and should not have the right to vote. He believed that the southerners who fought were tragic heroes, not having much realistic chance of winning a war against the richer, more industrialized North, but having to stand for what is Right. (My father, a native of the state of Georgia, used to endorse a similar view to the Lost Cause: that the Civil War was fought primarily over the issue of states’ rights; although I must admit that I rather doubt it. Slavery was the most high-profile issue at any rate.) Hampton was a prominent figure in Democrat politics before and after the War; but due to Reconstruction policies and voting black freedmen the whole South was dominated by the Republican Party. South Carolina in particular had a black majority at that time, and with white Republicans (including carpetbaggers and scalawags), Radical Republicans endorsing black suffrage etc. were firmly in control. 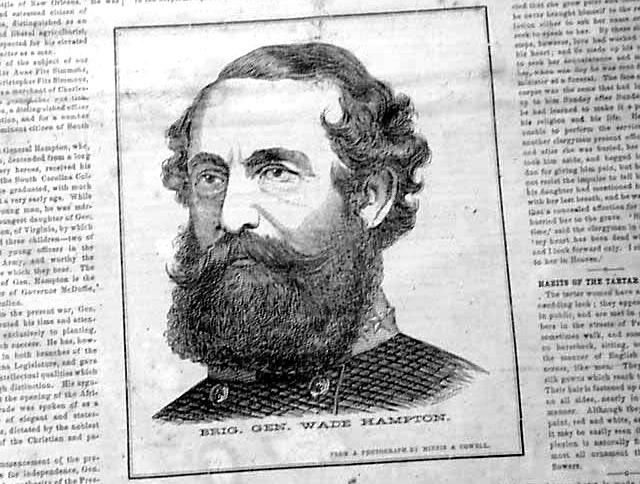