(all formations are impermanent)

I am writing this on Christmas evening, and so I feel like writing something approximately religious. But of course Christmas isn’t a Buddhist holiday—when I was in Burma there were times when I would be looking at the calendar trying to figure out the date and I’d realize, “Hey, yesterday was Christmas!” There was one Christmas I spent in Rangoon in which the most memorable event was getting a badass jam and cheese sandwich in my alms bowl. So I won’t write about Christmas. I’ll write about a winter festival I tried to establish in a village of northwestern Burma/Myanmar, more than ten years ago by now.

I lived at Wun Bo Wildlife Refuge Monastery at the time, and was senior monk there. The place was situated in the middle of about 400 acres (around 160 hectares) of more or less virgin forest, though the forest was pretty scrubby as the area was semidesert. The most common trees there don’t even have English names as far as I know; the main species was called dahat in Burmese, which in Latin is Tectona hamiltoniana—a tree in the same genus as teak. The wood made excellent firewood but was pretty much useless for anything else, as it was crooked and twisty and not very thick.

Though the area was fairly arid, the monastery itself was on the east bank of the Chindwin River, and at the time most visitors from town came by boat. Traveling by boat was by far my favorite means of transportation in Burma, though now the sampans are going obsolete, as jitneys get better gas mileage, and roads are gradually being improved.

The thing about the Chindwin River, and Burmese rivers in general, is that it floods during the monsoon or rainy season, but is much reduced during the seven months of the dry season. Consequently there are great sand bars and beaches on the river when the water is low, and then it’s all covered in deep water when the rains start again. This gave me an idea for a meaningful pagoda festival in a land of not particularly meaningful ones.

The Burmese love pagodas. There are tens of thousands of them in Myanmar. Pretty much every hill has a pagoda on top of it, and every pagoda, except for the smallest and most remote and obscure, has a day of the year set aside for a festival. The word usually used for “pagoda,” a bell-shaped pile of bricks, is phaya, which generally means “lord.” The same things that happen at other festivals generally happen at pagoda festivals: people eat, drink tea, talk, offer food to monks, listen to a sermon on Dhamma, and then share the merit with all beings. I’m not sure why the Burmese love and revere pagodas so much, but they do.

So anyway, the idea I had: I have seen pagodas made of sand. The way to make one of these is first to make large rings of bamboo matting about one and a half feet wide, and of variable lengths. These rings of bamboo matting are then formed into circles of different sizes. The largest ring is set down on the place where the pagoda is to be constructed, and it is filled with sand, earth, or gravel. Then the second-largest ring is centered on top of the first one, and it too is filled to the top and leveled. This process is continued until a large conical step pagoda is built. Then a hti or “umbrella” made of bamboo or cheap metal is placed on top of the pagoda like a crown. It’s a fairly easy way to build a Buddhist pagoda. 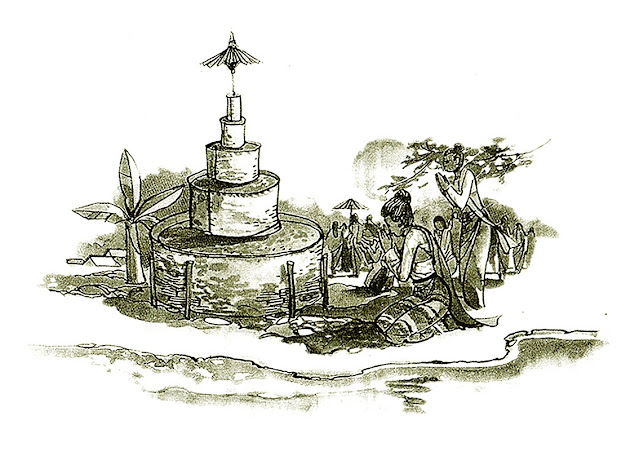 I somehow got the idea that it would be nice to build one of these sand pagodas on the beach near Lay Myay village during the cold season, the first half of the dry season. People could write down anything they acknowledged, or even wanted to be impermanent, like a lost loved one or a bad habit, and place it at the bottom of the pagoda before the first ring was filled with sand. They could have the usual food and tea drinking and talk, and a monk could give a sermon specifically about impermanence, anicca. Then, when the rain started in May or June the river would swell and the whole pagoda would be washed away, to be rebuilt at the next festival. It seemed like something meaningful and very much in accordance with Dhamma: all formations, all conditioned things, are impermanent.

So I ran my idea past some supporters in Lay Myay village; and they seemed a bit surprised and confused by such a strange notion, but then again, I was the rare and exotic American monk, and I performed such rare austerities as meditating alone in a cave and not handling money, and so they agreed to try the Impermanence Pagoda idea.

They really outdid themselves too: not only did they make a pagoda about 15 feet high, but one person built a bamboo hti for it, and somebody even made some bamboo guardian lions to flank the main path in front of the pagoda, covered with painted paper and gold tinsel. The idea of writing the names of impermanent things on slips of paper to be entombed at the bottom of the thing was just too unusual for very conservative Burmese Buddhist villagers, though, and so that part of the idea never struck traction.

Unfortunately, the river flooded at night the first year of the Impermanence Pagoda, so we couldn’t watch it die. The same thing happened on the second year. But the main problem was the relative permanence, or at least the relative stubbornness or hard-headedness, of Burmese village tradition. It just isn’t traditional to build a pagoda just to have it be washed away six months later. In fact something isn’t traditional, and is thus very confusing and suspicious, if it is acknowledged at all, if it has not been encountered many times by a Burmese village person. The villagers humored me and built the thing out of respect or consideration for me and my strange foreign ideas, but they never made it their own, and as soon as I stopped campaigning for it the Impermanence Pagoda went the way of the stegosaurus. They continued, however, to venerate pagodas made of brick situated on hills.

To this day I still think it is a good idea, though. Maybe a group of western Buddhists could take up the baton and build such a pagoda once a year. The thing is, though, that most western rivers don’t rise and fall to the extent of rivers in arid regions of Southeast Asia. Building a sand pagoda on a beach might work, but that would be a very impermanent pagoda, as it would be washed away when the tide came in, in a few hours. Maybe a pagoda could be made of snow during winter, and then it might last for weeks, depending on how cold the area is. Anyway, if there is a place that is regularly flooded, like on an annual basis, and there is plentiful sand there, and there are Buddhists willing to have their own pagoda festival in remembrance of anicca, then the idea might still catch traction and become a tradition someday. But even traditions are impermanent.

On the MGTOW Claim of Female Hypergamy