Trying to Ease the Pain of Existence


Demand is born out of duality: "I am unhappy and I must be happy." In that very demand that I must be happy is unhappiness. When one makes an effort to be good, in that very goodness is its opposite, evil. Everything affirmed contains its own opposite, and effort to overcome strengthens that against which it strives. When you demand an experience of truth or reality, that very demand is born out of your discontent with what is, and therefore the demand creates the opposite. —J. Krishnamurti

(This is the first post I ever wrote for this blog, more than one year ago, except for the quotes above, which I just added. Consequently it’s written more in the style of the other, more explicitly Buddhist blog. It’s somewhat of a missing link, or a bastard hybrid.)

Most people, including most Buddhists, are not introspective and insightful enough to appreciate this, or the Second Noble Truth either: that suffering is the inevitable result of desire. So people tend to blame something outside themselves for their own self-generated unhappiness—and this is especially true in the West, where we are taught practically since infancy to be superficial and materialistic.

What many people do to alleviate their basic, chronic dissatisfaction is to distract themselves with something relatively pleasant: food, hot sex, drinking, socializing, narcotics, video games, etc. If one is fortunate one may choose a relatively harmless distraction, like hanging out with friends, old movies, or keeping tropical fish, but any of the ones I mentioned, if indulged in to excess, just makes things worse in the long run. Even hanging out with friends can be harmful if one picks the wrong friends or gets "clingy." For that matter, even watching old movies can be harmful if one becomes obsessive about it.

The natural reaction for someone in pain is to want things to be different—they want change in the situation. And, as just mentioned, they don’t really want to change the actual cause for their suffering, which is really their own attitude; they want to change things on the outside. Often, instead of changing just one person, their own self, which is actually possible, they want to change seven or eight billion other people, so that they won’t do that thing that the one finds so damn triggering.

This is why mobs of howling protesters tend to be radicals or “liberals”: conservatives want things to stay pretty much the same. They’re not much inclined to go out howling and throwing bricks and yelling “Keep things the way they are!” This is one reason why a black leftist whose middle name is Hussein was elected president of the United States, twice, and the conservatives mostly just scowled or grumbled; but when a white populist nationalist with orange hair is elected, we have crowds of leftists throwing extremely dramatic conniptions in the streets and pretty much anywhere else convenient.

The thing is, though, that even if these people got what they want, even assuming that what they want were actually an outward improvement and a viable, really workable plan (which is quite debatable, if they were willing and capable of debate), most of them still wouldn’t be happy. They might celebrate and grin at each other and do some enthusiastic mutual back-slapping for awhile, but before long that chronic unhappiness would inevitably return…and they’d have to look for some new external phenomenon to blame for their own dissatisfaction. Angry young men demand independence for their country? After they get it they’re still angry, and may just start a civil war to help themselves feel better. Feminists demand equal rights? Well, they get it, and are even more unhappy than they were before, and start complaining about things that are ridiculously trivial, like “mansplaining.” Such things happen again and again, and have done since history has been recorded. People just don’t get it. It’s not what’s on the outside that really determines whether or not you are happy. It’s your own attitude, your own wisdom or lack of it. People can be happy in totalitarian dictatorships, or alone with no money, no food, and no friends in a wilderness (although if one is starving, or one’s baby is starving, or one is in a torture chamber, then naturally it’s very much more difficult); or they can be freaking miserable basket cases in a relatively free democracy with all the modern conveniences.

So lately, people are agitating and protesting and rioting for “progressive reform,” which for all they know wouldn’t even work if they got it. There are some people who aren’t even chronically messed up, and who weren’t even brainwashed in the Liberal Arts department of a university, who naturally assume that a globalist socialist welfare state would be a significant giant step in the general direction of Utopia. But Utopia can be found, if anywhere at all, only within one’s own mind. Habitual malcontents will never find Paradise or anything resembling it, regardless of political or economic systems, or anything else external. Rather than try to change eight billion others, just change yourself—or just observe yourself with some introspection, and learn something. 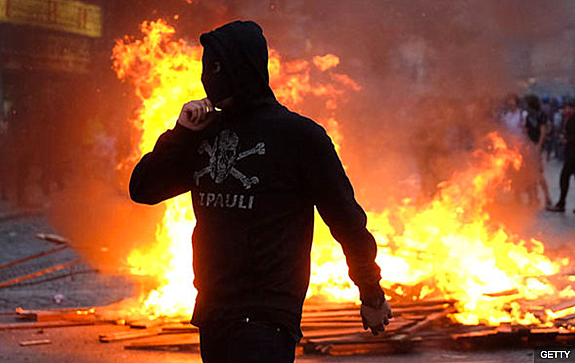