TRIALS, TRIBULATIONS, AND ULTIMATE TRIUMPH OF A MONASTIC COMPUTER OWNER IN UPPER BURMA


Well, there I was considering whether to write some sort of special anniversary issue for this blog, and instead my computer died. In a forest in upper Burma.

More than two months ago I posted a notice that the computer had died, and that my maintenance of this blog would be sorely limited until I got the thing fixed or replaced. After 2½ months the situation, I am very happy to say, is FINALLY fully resolved (yay).

My old laptop, a 2015 Macbook Pro obtained in the USA, was a good computer until it started not waking up from sleep. It would go into a kind of coma for a day or two until finally letting me shut it down and start it again. After making various attempts to fix it and failing, I simply started avoiding sleep mode, shutting it all the way down when I wasn’t using it, and hoping it would last until my planned return to America in December. But then a few days later it just shut down all the way while I was using it, and after a few half-hearted, spasmodic attempts to restart, it died. Whether it would have died in America or not I don’t know; one possible explanation is that the fluctuating, off-and-on, screwy electricity here on the outskirts of the village of Yay Chan O (“Cold Water Pot”) somehow fried it.

I have an old friend/supporter in Rangoon who is Australian and who also owns a Mac, and so I contacted him. He said the chances of it being fixed anywhere in Burma except Rangoon were “nil.” When it became obvious that the computer was really dead I asked if I could send it to him so he could take it to an actual Apple store with people qualified to fix it. His response was that Donald Trump is a big bad bully, that Trump is evil and incompetent, that Trump is going to jail soon, etc. So I’m like, “THE QUESTION IS can you take my computer and send it to the Apple store in Rangoon?” After a little bit of back and forth, he agreed.

But instead of giving me his address so I could send the thing directly, he had a friend of his in the nearby town of Pyin Oo Lwin come and pick it up, because he knew a little about fixing computers and maybe could fix it himself. I figured, well, if it’s something minor and easy to fix, it could save a long delay from sending it all the way to Rangoon. If the guy couldn’t fix it he would send it to my friend in Rangoon…but for reasons of his own, after failing to fix it, he changed the plan and sent it to a friend of his in Mandalay.

As was easily predictable in Burma, the guy in Mandalay not only didn’t know what was wrong with it or how to fix it, he proceeded to mess it up worse, breaking one of the internal speakers and losing some of the screws. It took him more than a month to do this. At my insistence he sent it back to the guy in Pyin Oo Lwin, who finally sent it on to Rangoon.

My friend/supporter in Rangoon took it to the Apple store, where after a week or so they also declared themselves unable to find what was wrong with it, not to mention being unable to fix it without replacing the entire motherboard, as well as the batteries. This would cost about $600 US, and would take more than another month, and still might not fix the computer; so the guy in Rangoon collaborated with another friend/supporter of mine in California to get a new laptop as a replacement.

When he was in Bangkok on a visa run he found that Macs in Thailand are more expensive than those obtainable in Rangoon, and furthermore have keypads in English plus Thai; so after returning he ordered me a 2017 Macbook Pro at the Rangoon Apple store, which was duly shipped in from Singapore. By this time more than two months had elapsed since my computer died. I occasionally checked emails, etc., by borrowing a 2011 Mac from a monk at this monastery—the one I owned before getting the 2015 one, and which still works fine.

Then—and I don’t know if this is significant—my friend/supporter in Rangoon played around with the brand new 2017 laptop, making it current and downloading fancy stuff onto it before sending it on to me here in Yay Chan O. When I got the thing I found that the “startup assistant” was no longer an option, so I looked around and found the “migration assistant” for downloading files, apps, settings, etc. backed up from my old computer. The transfer took about an hour, the little window said I had to restart, I clicked on restart…and the new computer booted up and wouldn’t fucking start. At this point I was losing patience and lapsing into despair. Maybe if I had waited long enough it would have started, but it remained stuck with the progress bar all the way full and nothing happening. I tried to restart again, with the same results. So then I tried deleting the whole data transfer and trying again from scratch. I wound up wiping the whole disk (“doing a Hillary”), which then required me to reinstall the operating system.

BUT, the Internet recently, seemingly starting on the day I was sent the new laptop, was so slow and unreliable that I was stuck with a brand spanking new computer with no OS and Internet too lousy to reload it. My first attempt to reinstall the operating system resulted in several hours, 6GB of data, and more than 15,000 kyats of phone credit expended, whereupon the Internet failed and the whole download crashed. Welcome to fucking Burma.

Usually the Internet here isn’t so bad, but obviously my karma was running amuck in its attempts to prevent me from owning a functional computer (somewhat like the Democrats’ attempts to prevent Mr. Trump from governing the USA). To top it all off, the Internet data packages that I get on a cell phone (pretty much all Internet access here is through cell phones and wifi hotspots) began ripping me off, claiming that I used up an entire 1GB data package in a matter of minutes just checking emails, my Minds account, etc. This also started on the day I received the new laptop. More karma, evidently.

SO, to make a long story even longer, this is what happens when a Buddhist monk, who is forbidden to handle money and has to rely on others for anything requiring it, tries to use anything technological in a relatively undeveloped 4th-world country. Burma is great so long as you want to live in a cave and meditate—it may be the best country in the world for that—but if you want reliable Internet access or a computer to be fixed you’re pretty much screwed. (It’s hopeless. I have often considered that the greatest calamity to befall Burma has been independence from the British.) Lately I’ve really been hating this country, which maybe is making my karma worse, thereby helping things to become more of a messed up fiasco. And I’m still having to rely on a supporter who actually believes CNN’s anti-Trump propaganda and impulsively, borderline-hysterically parrots it to me repeatedly in texts and emails. (“He’s a pathological liar! Mueller’s got him now! He’s going down! He’s totally incompetent! He tried to influence the outcome of the election! He’s in Putin’s pocket! Hillary could beat him in 2020! He has no truth!” etc. etc. baa baa baa.) But he seems to be calming down lately as it becomes evident that Trump won’t be forced out of office, and after I have warned him about the bad karma involved in badmouthing people behind their back. And besides, after waiting for the Internet service to improve, I have finally managed, on my second try, to reinstall the OS, so now I have a functional computer again! Consequently, although two or three of my most recent articles were not backed up and were lost, the blog is back on track again, more or less. Since I’ve blown my scrupulous regularity I may be more carelessly sporadic in posting in future.

The best laid plans of mice and men, and all that. 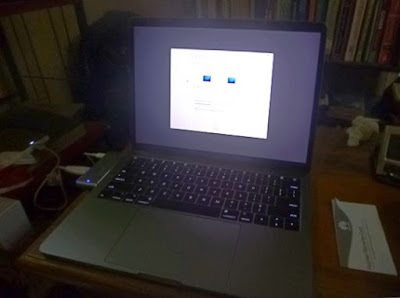 The first computer I ever owned was a 2011 Apple MacBook Pro. It had a memory of about 500 GB, a CD/DVD slot, and two USB ports. The thing still works fine—in fact it may work better than when it was new, as it has had an updated OS downloaded into it. The second computer I owned, a 2015 MacBook Pro, was much faster and was also lighter, but it had only half the memory and no CD slot. This new 2017 MacBook is probably faster still, and weighs only about half of what the 2011 model did, and is more compact, but it still has only around 250 GB of memory, no CD slot, and even no USB ports at all. I wondered about this a little—one would think that a new, improved computer wouldn’t have less memory and no USB ports at all—but the explanation seems fairly straightforward: the people at Apple consider the Cloud to be the future of data storage, with most people keeping most of their data in the Cloud, thereby rendering lots of memory capacity and also flash drives to be soon to be obsolete. Like stereotypical leftists, they are more oriented toward the future than toward conveniences in the present time. So to use a flash drive, or my backup disk, or my cordless mouse, I now have to use an adapter. One other thing about (presumably leftist) Apple policies that is marginally interesting is that the little green/orange LED on the power cord indicating whether or not the laptop is charging, which I always liked, is now gone. My guess is that Apple is so “woke” with regard to saving the world that they are eliminating all unnecessary lights, which might waste a fraction of a watt of precious energy. No indicator lights at all on the new computer, other than for “caps lock”; in fact even the Apple logo on the lid doesn’t light up anymore when the thing is on.