Valentinian the First, and Other "Greats"


Great things are achieved only when we take great risks. —Frederick the Great of Prussia

Some, although certainly not all, of the raging hostility toward US President Donald J. Trump is no doubt a reaction to what is perceived as uncouth lowbrow vulgarity—he is considered to be so “unpresidential” as to be a national embarrassment. Also, he is considered to be immoral (let alone politically incorrect) in his thoughts, words, and deeds. These may actually be the main reasons for disliking the man among many Never Trump Republicans—that plus his aversion for globalism and the free importation of cheap labor from places like Mexico; although with most people on the political left his perceived vulgarity and moral inferiority are just frosting on the cake. It’s mainly just something convenient to rage about. They’ve got plenty of other reasons too, although I see no need to wallow in their reasons here. Mainly I’m interested in the idea that vulgarity and/or moral inferiority somehow render a person incapable of being a great political leader.

The first (alleged) vulgarian populist to become President of the United States was Andrew Jackson, who was furthermore a hot-headed, violent man who killed people in duels, yet he was deemed a great enough President to have his face portrayed on US twenty dollar bills. Andrew Johnson and Ulysses S. Grant were both notoriously sloppy drunks, with Grant allegedly offending married women by groping them while in a drunken stupor on numerous occasions; and although Johnson was impeached, Grant was deemed a great enough leader to have his face portrayed on fifty dollar bills. Furthermore, John F. Kennedy and of course Bill Clinton were notorious pussy-grabbers, even within the walls of the White House itself; and although Clinton was impeached Kennedy has been considered to be one of the greatest of US Presidents, so that his profile has been impressed on US money as well. Thus it is evident that political greatness is not necessarily a matter of personal virtue or of cultured sophistication.

In fact, some of the political leaders awarded the title of “The Great,” not by their own orders, mind you, but by posterity, have been downright sociopathic savages. One of my favorite examples of this phenomenon is Valentinian I, or Valentinian the Great, of the late Roman Empire.

In the year 364 CE, the emperor Jovian died suddenly after a feast (the historian Edward Gibbon surmised that it must have been the quantity of the wine or the quality of the mushrooms), so many of the chief civil and military authorities of the Empire met in an emergency council to determine who should be Jovian’s successor. The nation was in a state of crisis, with repeated incursions of Germanic barbarians in the west and Persians in the east, not to mention the occasional invasion of Picts in Britannia and Moors in North Africa. The council unanimously agreed upon Valentinian, one of Rome’s most successful generals, to be the next Imperator Augustus. A subsequent emergency council unanimously chose him again to be the next leader. He was absent from both of these meetings, and apparently did not come to power through any political maneuvering, shady or otherwise. He was simply deemed to be the one man most capable of dealing with the chronic state of crisis in the empire.

Valentinian, in addition to being a competent military commander, was apparently also a patriotic Roman who sincerely wanted what was best for the nation. Within his own limitations, he conscientiously tried to be a good leader. In certain respects he was quite just, as in his insistence that every Roman should have freedom of religion—and this at a time when the new “progressive movement” of Christianity had risen to power and was eager to persecute conservative Pagans.

But Valentinian, though he struck fear into the hearts of the barbarians and helped Rome to regain some semblance of prosperity, was also a psychopath. He had a tendency to erupt in insane rages, and commonly had Roman citizens tortured to death for the slightest of offenses. Some people he ordered beaten to death with clubs; others he had burned to death; and still others he had fed to his two pet brown bears, Innocence and Golden Camel. He would amuse himself by watching his bears tearing apart and devouring some wretch whose only offense may have been to fail in some commission or to make some careless remark. As a typical example, on the day of his death Valentinian was about to mount his horse when the horse suddenly shied; as a result of this he ordered that the groom holding the horse’s bridle have his hand chopped off. Fortunately for the groom, his commanding officer took pity on him and delayed the order, which presumably was neglected after Valentinian’s sudden death—he collapsed from a stroke after bellowing in rage at some barbarian emissaries suing for peace.

So here we have a very bad man who happened to be a relatively good Emperor, good enough to promote the prosperity and safety of Romans in general, and good enough to be called “The Great” by subsequent generations of Romans and by modern historians. He didn’t call himself “The Great,” mind you; he was called that after he died by people who were in no fear of being beaten to death with clubs or fed to bears if they didn’t grovel properly.

It is true that Valentinian lived in a more barbarous and violent age than the one we are wallowing in now, although the education of the Roman Patrician elite put our own educational standards to shame, especially now that Academia in the west has degenerated into a laughingstock, little more than a network of neo-Marxist indoctrination camps.

Anyway, I recently Googled up (or rather Binged up) a list of the people in history called “The Great.” It’s a surprisingly long list, with at least half of the names being of people I’d never heard of. For example, who’s ever heard of Alexander the Great, the 15th-century king of Georgia? Or of Chlothar the Great of Neustria, Farrukhan the Great of Tabaristan (wherever the hell Tabaristan is), or Simeon the Great of Bulgaria? Setting aside popes and saints (like Gregory the Great or Gertrude the Great), many Greats really were relatively refined for their time, like maybe Pompeius Magnus of Rome or Frederick II of Prussia; and some other Greats were relatively wise and virtuous, like Ashoka or maybe Akbar, or some of the modern “Great” kings of Siam/Thailand. 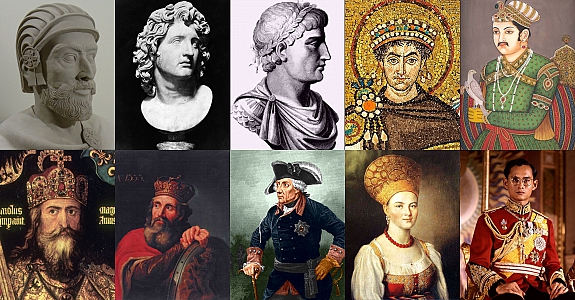 But a great many rulers called “The Great” have been essentially narcissistic sociopaths primarily concerned with the promotion of their own power and glory—who nevertheless were also intelligent, shrewd, and to some degree conscientious with regard to doing what was best for their country, if only out of desire to go down in history as “Great.” People called “The Great” also tend to be audacious and aggressive—which nowadays to effete decadents, especially on the left, constitutes a totally unacceptable abomination. But those very qualities are what leads on a person to conquer his and his country’s enemies, to dominate his and his country’s rivals, to achieve supremacy, and to attain historical Greatness.

Getting back to Donald Trump…the man is living proof that a vulgar fellow with an ego a mile wide, a vulgar streak even wider, and a weakness for beautiful women other than his wife—though he is reviled hysterically by his opponents—can be an effective and successful leader. People called The Great actually tend to be vehemently reviled by their adversaries. As the legal pundit and blogger John Hinderaker wrote recently,

We live in a schizoid time. In the world most of us inhabit, things are going extraordinarily well. We are in the midst of the longest bull market ever. Employment is at a record high, unemployment—especially among minorities, young people and women—at or near record lows. GDP is growing at a 4% clip, which liberal economists deemed impossible in the last administration. Wages are rising. We are at peace, but at the same time our government is finally taking steps to deal with long-festering problems in Iran, Russia, China and North Korea. What’s not to like?

If you listen to most journalists and pundits, none of that is important.

So the greatness of a leader is not necessarily a matter of his personal habits or his refinement or lack of same; it is much more a matter of his doing what is necessary to lead his people, his nation, to greatness. I learned long ago something that many people, especially on the political left, seem incapable of comprehending, namely, that what is good and right from a political point of view is not necessarily what is good and right from an ethical or moral point of view. For a leader always to do what is moral is political suicide, regardless of how horribly Machiavellian that may sound. The real trumps the ideal.

A good man can be a bad President, as Jimmy Carter, bless his heart, demonstrated back in the 1970s; and likewise a bad man can be a good President (like maybe Andrew Jackson? or maybe even George Washington, who used dentures made of teeth pulled from the mouths of his black slaves!). As has been pointed out many times, if you have a dangerous disease it doesn’t matter if the doctor treating you is a virtuous man or not, so long as he is curing you of the disease; and nowadays the disease Americans, and people throughout the west, are suffering from is neo-Marxist globalism, alias the New World Order, with its symptoms of “progressivism” and PC hysteria. This disease threatens to undermine and destroy our modern western civilization based upon Enlightenment ideals of reason, personal liberty, and the dignity of the individual.

Bearing all this in mind, and bearing in mind also the crisis the western world is facing, with decadent leftists and globalists apparently eager for the collapse of western culture itself, actually inviting the barbarians to invade and take over, Mr. Trump may really have the potential to go down in history, regardless of any clownish vulgarity or pussy-grabbing, as Donald the Great! Strange is this, but he’s a much better fellow than “Greats” like Valentinian, or Justinian, or Genghis Khan.

…[L]egislators and leaders of men, such as Lycurgus, Solon, Mahomet, Napoleon, and so on, were all without exception criminals, from the very fact that, making a new law, they transgressed the ancient one, handed down from their ancestors and held sacred by the people, and they did not stop short at bloodshed either, if that bloodshed—often of innocent persons fighting bravely in defense of ancient law—were of use to their cause. It's remarkable, in fact, that the majority, indeed, of these benefactors and leaders of humanity were guilty of terrible carnage. In short, I maintain that all great men or even men a little out of the common, that is to say capable of giving some new word, must from their very nature be criminals—more or less, of course.     —Fyodor Dostoyevski