Which Is More Likely: Civil War in the USA, or in the EU?


The tree of liberty must be refreshed from time to time with the blood of patriots and tyrants.  —Thomas Jefferson

Lately, especially since the whole Kavanaugh confirmation shitstorm in America, with an increase of (overwhelmingly leftist) mass hysteria raging in the streets, I have been seeing many prophecies that the USA is headed for civil war. On the other hand, I see few prophecies, from Americans, Europeans, or anyone else, that civil war is looming ominously in the European Union. I assume the main reason for this imbalance is that Americans are more hysterical, and furthermore are armed to the teeth with lethal weapons, whereas the western Europeans are calmer, more “civilized,” unarmed, and socially castrated. (Also, I suppose, because I’m an ethnocentric American I may just listen more to prophecies concerning America.) Nevertheless, to dispense with all suspense in my very first paragraph, I consider real civil war—cities in flames, blood flowing in the streets, bodies hanging from lamp posts—to be much more likely to occur in the EU than in the United States. The following will be an attempt to explain why I consider this.

First of all, the civil war in Europe will undoubtedly be caused in large part, assuming that it actually occurs, by violent Muslim migrants who refuse to assimilate into secular humanist European society and refuse to adopt such European values as the equality (or even superiority) of women and homosexuals. America has a less malignant migrant crisis going on, mainly because Hispanic Catholic Christians are much easier to get along with in general, and more willing and able to assimilate, than are, say, Pakistani and Somalian Muslims. In America the great divide is between globalist Democrats and nationalist Republicans, who may hate each other, but they are mixed together and usually difficult to tell apart from a mere glance. In Europe there is the more irreconcilable difference of alien races, cultures, and religions, with the antagonists often being very obvious to each other—dark-skinned foreigners and pink-haired progressives on one side, and Europeans with natural hair colors on the other.

Also, one of the warning signs of impending doom in America, namely the raging hysteria, anger, and hatred, actually serves as a kind of pressure-release valve. Americans are able to vent their pent-up aggression by attacking trashcans, screaming incoherently in the street, and sending really vile, nasty tweets to each other. This is one of the many blessings of freedom of speech, freedom of thought and expression, guaranteed to the citizens of America by the US Constitution (which the left doesn’t like so much when the people they hate exercise these rights, because they’d prefer that America be more like Europe). But as Sigmund Freud could tell you if he were still alive, the repressed urges of a “civilized” person have a nasty way of lurking beneath the surface and building up pressure until they finally erupt, sometimes very dramatically, in the form of hysterical symptoms. The sophisticated and seemingly very sheeplike Europeans may easily explode and become like atavistic cave people, as has already happened so many times in Europe. Feminized emasculation may be only skin deep.

Another consideration is that, although Americans have guns—in fact there are more guns than Americans in America—the distribution of them is very lopsided, with the patriotic nationalist Republicans owning most of them. The globalist Democrats, again wanting to be more European, tend to dislike guns and to want the Second Amendment of the US Constitution abolished, rendering US citizens as harmless and defenseless as their sophisticated European sisters. On the political left, it’s mostly the criminal gangbangers that are armed and deadly; but even if Bloods, Crips, and the fellows of MS-13 somehow joined forces in a unified hysterical hatred of Whitey, they and their pistols would be up against grim-faced patriotic rednecks armed with AR-15s and pump shotguns, with quite a few pistols of their own, opposing the left’s hatred and hysteria with their own grim determination to defend their homes, their families, their freedoms, and their country. The less hysterical leftists can see plainly enough that in such a contest between progressive city-dwellers and conservative rednecks, the leftists would be slaughtered like sheep. They might prevail in the cities, and along most of the Pacific coast, where leftists abound; but even so those dirty nationalists grow most of the food, and could starve their cosmopolitan enemies even if they didn’t shoot them.

As I never tire of observing, the western Europeans have become, generally speaking, with many exceptions I hope, a decadent, degenerate race of culturally castrated social eunuchs; and this very weakness and degeneracy may be the only thing that prevents the EU from exploding into civil war—in which case it will probably develop eventually into a patchwork of Islamic emirates. But if/when berserk jihadis are running amuck in the streets howling and wielding machetes, I would guess that some men, at least, will reach back into their stone-age, bronze-age, iron-age, medieval, and early modern roots and find some will to survive, as well as a pair of not-entirely-atrophied testicles. What politically correct, feminized, sensitive European police and military forces would do in such a conflict is questionable: thus far they have seemed largely ineffectual in maintaining order when order has begun breaking down. Without firearms, at least at first before wiseguys start smuggling them in to both sides, the civil race war will have to be fought the old-fashioned way, with knives, spears, rakes, chair legs, fire, and improvised explosive devices.

There could still conceivably be a civil war in the USA, but it would be rendered very unlikely if the Democrats are beaten and humiliated in one or both of the next two big federal elections. More and more, people are seeing the left in America as a raging, hysterical mob, almost a cult, totally unscrupulous in their methods and opposed to the very policies that have recently led to greatly increased prosperity in the nation, as well as a foreign policy that is yielding important, mostly positive results. If the Democrats lose big, especially if they cheat and lose anyway, they may finally realize that “progressivism” is going out of style fast, and is more of a liability than an asset; and slaves to fashion that most people are, they will move on to something slightly less insane than identity politics and calls for socialism, open borders, and the extermination of white males.

On the other hand…despite the aforementioned cultural castration of most western European men (and I have just recently learned that Sweden is now legally requiring men to sit or squat while peeing), just one too many terrorist attacks, just one too many teenage European girls being gang raped by migrants, just one too many children being decapitated or otherwise butchered by a “refugee,” just one too many peaceful citizens being brutally murdered in public in broad daylight, just one too many grandmothers being arrested, jailed, and silenced for expressing concern over the chaotic crime scene her neighborhood has become, just one too many peaceful protests being denounced by the Establishment as neo-Nazi white supremacist rallies, just one too many revered national monuments being vandalized and desecrated for offending Islamist values, just one too many gang wars in the streets between Eritreans and Afghans or whatever, with the police doing nothing or being incapable of stopping it—and we may witness a sudden explosion. The men of Europe may find themselves returning, quickly, to their primordial Cro-Magnon roots. At least they will stop being eunuchs—unless the Muslims win, in which case they may be made into eunuchs in the literal sense, and put to work guarding the harems.

Civil war in America, although unlikely methinks, could easily trigger, if it does happen, wars throughout the western world, serving as some kind of shining example to patriotic nationalists everywhere. Contrariwise, a civil war in Europe could effectively prevent any chance of war in America, as it would demonstrate the genocidal fiasco that the policies of the new left ultimately lead to—especially with regard to the borderless feminized welfare state.

But, of course, only time will tell. 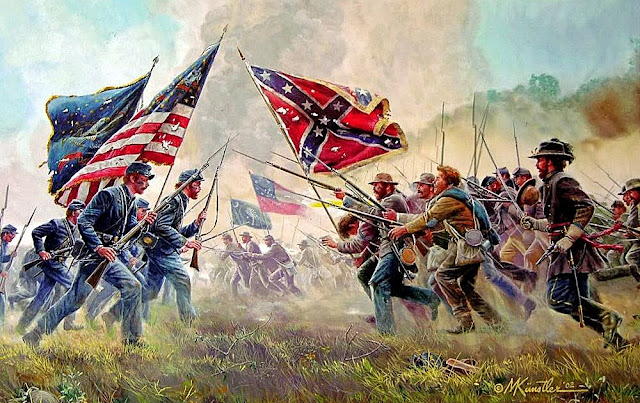