White Ethnic Pride: The Indo-European "Aryan" Race (part 3: How Did They Conquer the Ancient World?)


The greater part of the world has, properly speaking, no history, because the despotism of Custom is complete. This is the case over the whole East. Custom is there, in all things, the final appeal; justice and right mean conformity to custom; the argument of custom no one, unless some tyrant intoxicated with power, thinks of resisting. And we see the result. Those nations must once have had originality; they did not start out of the ground populous, lettered, and versed in many of the arts of life; they made themselves all this, and were then the greatest and most powerful nations of the world. What are they now? The subjects or dependents of tribes whose forefathers wandered in the forests when theirs had magnificent palaces and gorgeous temples, but over whom custom exercised only a divided rule with liberty and progress.  —John Stuart Mill, from “On Liberty”

Now it is time for the big question: after discussing the nature and origins of the Indo-European or “Aryan” race, the issue remains of explaining how or why they were so phenomenally successful; how or why they able to overrun almost all of Europe and much of Asia besides, in the time between around 6000 and 3000 years ago.

For starters, the primordial Indo-Europeans were physically large and robust, resembling the modern natives of northern Europe. Consequently, man for man, in a violent conflict the Aryans would probably have had some slight-to-middling advantage over smaller adversaries, such as the non-Aryan caucasians of the Mediterranean lands or India. But I assume this is a relatively minor, unimportant consideration. Simply having a relatively big, strong body is not going to allow you to conquer the world.

However, if one combines the size and strength with an aggressive, warlike disposition (culturally conditioned or innate, it doesn’t matter which), then the consideration becomes more considerable. Large, powerful, and warlike barbarians are going to be formidable, especially in an age when combat was hand-to-hand, and almost every man served as a part-time warrior.

Furthermore, the warlike nature was greatly assisted by a patrilineal, patriarchal society which emphasized masculine values of fearlessness and honor—which was evidently not the case with many of the cultures which the Aryans conquered and supplanted. In fact the patriarchal society was apparently beneficial in ways other than military as well, and was emulated by other cultures with which the Indo-Europeans came into contact. Exactly why, other than with regard to war, a patriarchal society would be able to outcompete a matriarchal one is something I do not know; although many of the scholars who concoct theories on the issue seem to think this was the case. It may be that a martial nobility, and a masculine code of honor, for example, strengthened the character of the people in general, and made them more competitive against other, more gentle and pacifistic cultures even in ways that were not military. It does make sense I suppose.

There may be genetic psychological factors which also helped the early Indo-Europeans to be so successful. Perhaps they were slightly cleverer, or more imaginative, or more energetic, or some such. But inherited racial psychological traits would be hard to prove at this point. Nevertheless, I suspect that some mental qualities, to be discussed below, were key to the Aryans’ success, no matter whether they were due to nature or nurture, genetics or culture.

But what may be the most important factor, or one of the most important, in accounting for the ancient Aryans’ phenomenal success and unique spread over the Eurasian supercontinent, is the fact that the early Indo-Europeans were some of the first people, possibly the very first, to learn to ride on the back of a horse. Horses had been kept as food animals by earlier societies, but the Aryans somehow figured out that riding one was possible and furthermore extremely useful. After learning horsemanship the Aryans developed cavalry, which no doubt had devastating effect against their enemies in war. It was a huge advantage in military technology, and the Aryans no doubt exploited that advantage extensively.

Not only did the addition of cavalry to their tribal armies make them faster and more lethal fighters, but there can be no doubt that their (largely unwilling) enemies, when confronted with men on horseback for the first time, would have been terrified, possibly not realizing that it was men riding animals, and not monsters. Hernando Cortez was able to conquer Mexico with only a few hundred soldiers and relatively few cavalry largely because the Aztecs and their allies labored under this very belief at first; and even after learning that the cavalry were men on horses and not supernatural creatures, still they had no experience in fighting such forces and were at an extreme disadvantage. I suppose the “Pelasgian” inhabitants of what is now Greece were in a similar plight when the first Greek-speaking Aryans invaded their territory, resulting in the ancient myths of centaurs—fearsome creatures that were half-man, half-horse.

Thus the advantage of cavalry would have been an overwhelming advantage to the Aryans, especially in their first waves into a new territory. Inevitably, as with all military technology, the rivals of the Aryans would have developed their own horse breeding and horsemanship skills and cavalry techniques, thereby of course diminishing the advantage over time. Another military advantage which the Indo-Europeans developed much later was the invention of the war chariot, which was another massive advantage in military technology. It required centuries for armies to develop adequate strategies against them, thereby eventually rendering them more or less obsolete. Yet another advance in military technology was the invention of iron weapons, with which the Aryans again were innovators, being some of the first people to use them. But, as with the chariot, the use of iron came long after the Aryans began spreading throughout Europe and western and central Asia. The Indo-European expansion began in earnest around the beginning of the Bronze Age, although at the very beginning they may have still been using stone spearheads and arrowheads in warfare and hunting.

Bearing this in mind, it would be easy for a politically correct social scientist to claim that the early Aryans were so successful and dominant throughout much of the Eurasian continent simply because they happened to stumble upon the invaluable innovation of using horses in warfare—it couldn’t possibly be because they were in some way really superior or special, since, after all, they were the primordial patriarchal white men. According to our hypothetical PC social scientist, it could just as easily have been some other group, speaking a different set of languages and worshiping a different set of gods. But the fact remains that the early Aryans were particularly innovative, perhaps even inspired, in their development of not only in the realm of military technology but also in such realms as stable and powerful social structures. This leads to another very probable reason why the Indo-Europeans enjoyed such stellar success—which may be partly genetic, but is undoubtedly largely a cultural artifact, and that is their capacity for thought. And that capacity for thought was profoundly conditioned by their language.

There is an idea, dating back in its earliest form to 1928, called the Sapir-Whorf hypothesis, or Whorfian hypothesis, which states that a person’s thoughts and ideas are limited by the language one employs. Obviously, it is much more difficult to think about something if you simply don’t have the words to do it. This, I think, may point to an even more important reason for the Aryans’ success than the riding of horses, which may have led to their very idea of riding them in the first place: the Aryans possessed a relatively very sophisticated, very adaptable, very powerful language (or eventually, family of languages). Because of their advanced linguistic technology, so to speak, they were able to think and say things others couldn’t think or say so easily, and thus they had a profound advantage over, say, societies with no number higher than ten, or with such rigid grammatical forms that they were literally mentally handicapped by their own words. This helps to explain why, although many “barbarous” peoples who have invaded and conquered more sophisticated societies have adopted the language and customs of the conquered race, as was the case with, say, Nubians or Semites conquering ancient Egypt or Mongols or Manchurians conquering medieval China, the Aryans tended to keep their language, merely adopting loan words from the conquered culture to fill in for new names of things. It also explains the “massive linguistic extinction event” which occurred throughout Europe when the Aryans invaded and took over. With a more powerful language, they were able to have more powerful ideas. Perhaps this could qualify as a primordial Meme War.

Whether the Indo-Europeans had brighter, more inquisitive, more analytical minds conditioning the creation of their language, or whether the language itself helped them to be brighter, etc., may be a chicken-and-egg sort of question. At any rate, the two factors of language and brain no doubt developed together over the millennia, and have helped the Indo-European peoples to be the most innovative and rationalistic people of the earth, speaking generally of course.

Summing it all up, the early Aryans became a sort of “master race” through a kind of powerful mental technology helping to fuel military technology and much else besides, including a very strong, very effective patriarchal societal structure that served us well up until postmodern times. And these two advantages were in turn superimposed upon big, tough, warlike barbarians who conquered and transformed the world into what we have today—abhorred by decadent leftists, but glorious nevertheless. 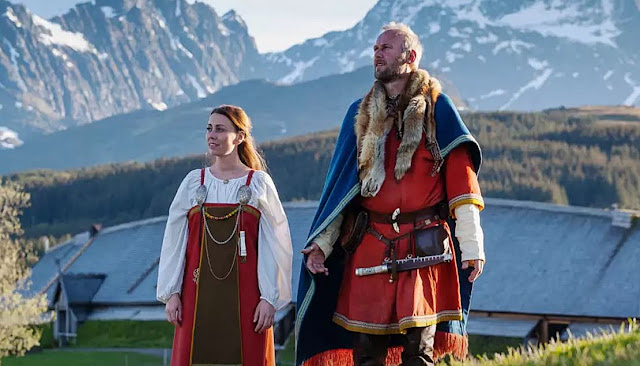