Newcomb's Paradox and the Culture War in America


“And what is truth,” Pilate said. —the Bible

Many years ago a German monk living in southern Burma sent me an article, written by a fellow named Martin Gardner, about Newcomb’s Paradox. (I think the article was originally published in Scientific American  in the 1970s.) Although the paradox is supposed to illustrate some aspect of free will, or game theory, or philosophy, it struck me primarily as an illustration of the sheer irrationality of the human animal—perhaps the paradox of how the most intellectual beast on the planet somehow manages, in spite of itself, to tie its own shoelaces. The paradox has stayed with me all these years, and in fact I am somewhat haunted by it lately, as it seems to be in full paradoxical force in American society—or rather, in two societies divided by a wall of hatred and hysteria.

The paradox is as follows. There are two closed boxes, A and B. A always contains $1000. B either contains $1,000,000 or is empty. The subject is allowed to choose whether to take the contents of the second box, B, or the contents of both boxes.

The trick is that there is a superior intelligence—a deity, a superhuman alien being, an extremely advanced computer, whatever—that decides whether B will contain the million dollars, or nothing. This intelligence makes predictions based on empirical data, and is right almost all of the time. It looks into the subject’s character and predicts whether the subject will choose only box B, or both boxes. If it expects the subject to choose only B, it puts $1,000,000 into the box. If it expects the subject to choose both, it leaves the second box empty. (Also, if it predicts that he will choose at random, say, by flipping a coin, it leaves the second box empty.) Now the question is this: You are the subject—which do you choose, box B, or both boxes?

Upon reading the conditions of the test, or game, or whatever it is, it was plainly, almost painfully obvious to me what the best choice was—pick B. Assuming that the superior intelligence is right 99.9% of the time, you would have a 99.9% chance of getting a million dollars; whereas if you pick both boxes, there would be a 99.9% chance of getting only a thousand. It seems totally absurd to take a 0.1% chance of winning a trifling extra thousand dollars, an extra 0.1% of the almost assured million. Why be so greedy that you would take a 99.9% risk of losing just for the sake of a measly extra thousand dollars? It’s so obvious.

But here’s the thing: the author of the article asserts that most people who are presented with the problem likewise think the best choice is utterly obvious—but around half of them, including very intelligent people, choose the other way! They think the utterly obvious choice is to choose both boxes, not just B. They have a rationalization for their choice too, which is allowed to have some sort of real theoretical validity, although I was never able to follow it. It just didn’t seem rational to me.

It may be that the people presented with the problem were very soft-headed, irrational liberal arts types. I don’t know about that. But this is the paradox: people are divided into two groups of roughly equal size, and both consider their solution to be the totally obvious one.

This paradox has been in my mind quite a lot lately, because it strikes me as similar to what is happening in American society, with two roughly equal groups of people considering their own solution to America’s problems to be the obviously right one and the other side not only to be wrong, but even perverse, even deliberately wrong and evil for not choosing the obvious, totally obvious right way. A recent glaring example is the whole witch trial fiasco of Judge Brett Kavanaugh’s nomination to the US Supreme Court—to people like me it was obviously a ruthless, Machiavellian attempt on the part of the Democratic Party leadership to destroy the reputation and credibility of Kavanaugh by any means necessary, for the purpose of preventing a conservative, Constitutionalist judge from being appointed to the Supreme Court; in fact the Democrats freely admitted in advance that they would do whatever was necessary to stop him—and the best they could come up with was unsubstantiated accusations of sexual misconduct when he was a teenager, well over thirty years ago. On the other side, around half the population actually took it all seriously, at face value, and was willing to follow the Democrats even in their insistence that actual evidence wasn’t even necessary to assume Kavanaugh was guilty of a whole series of misdeeds, including even gang rape. For them, a woman making an apparently sincere accusation was sufficient to ruin a man’s reputation and career. Many of them were intelligent, and presumably sincere, and not all of them were howling in hysteria; yet from my point of view their wrongness was painfully, nightmarishly obvious. Probably most of Kavanaugh’s opponents among the masses were heavily propagandized by the mainstream media, peer group pressure, echo chamber feedback, etc., but still. The whole paradox can easily be taken to an even greater scale by the entire civil cold war between the globalist “progressive” left and the nationalist, “populist” right. In this situation also each side considers itself to be obviously right and the other side to be obviously, damnably wrong.

In Newcomb’s Paradox, it is said that the people who choose both boxes take for granted the existence of free will, with the implied assumption that even God Almighty Himself could not know what choice they would make. I assume, tentatively, that such subjects guess that the higher intelligence will naturally predict that they will choose B, so they decide to outsmart this intelligence by scooping up the extra thousand dollars. I also tentatively assume that the advocates of globalist progressivism, and the detractors of Judge Brett Kavanaugh, have a similar attitude; I’m guessing that they consider themselves able to outsmart empirical reality by, say, actually getting socialism to work for once. They’re special, and not enslaved by any tool of patriarchal oppression such as logic. The fact that Marxist systems, and socialist ones in general, let alone systems fueled by mass hysteria, have always inevitably failed miserably, or that a borderless welfare state obviously couldn’t possibly not wind up a nightmarish fiasco, may have applied to others; but this time it will be different because we’re so special, and wise, and good, and castrated.

So, the civil cold war we are enduring is not to be chalked up entirely to deliberate evil, or even to Jewish conspiracies. A great deal of it is based upon the paradoxical human belief that we can outsmart or cheat reality somehow—at least with regard to the political philosophy of cultural Marxism or “social justice.” (This applies, of course, only to postmodern leftists who actually think and try to articulate their position, not to the sheeplike, obedient masses who simply follow whatever is in fashion.) And how anyone could actually believe that Judge Kavanaugh was a gang rapist is totally beyond me, to the point of seeming downright Kafkaesque. But that is apparently how people are—or about half of them anyway.

What is truth? I have read that, way back in the 20th century, there were three main philosophical theories to account for what truth really is: the correspondence theory, the coherence theory, and pragmatism. The correspondence theory asserts that a statement is true if it corresponds to some fact of empirical reality; scientific realism is based on this attitude, and it seems to be the default hypothesis for most thinking people. The coherence theory, favored by certain idealist philosophers like F. H. Bradley, asserts that a statement is true if and only if it is in harmony with every other statement already determined to be true—and thus an entire belief system is true if it is entirely logically self-consistent. Pragmatism, as championed by fellows like William James, asserts that a statement is true if it consistently works as a description or explanation, regardless of logic or some hypothetical empirical substratum. Bearing this in mind, with regard to the new postmodern neo-Marxism, which is increasingly pervading the attitude of the political left in the USA, it is hard to say exactly what they consider to be the primary criterion of truth. Postmodernism explicitly rejects the very idea of an empirical reality that can be described or explained correctly, objective empiricism being a tool of white patriarchal oppression, and “truth” being merely a cultural construct. The coherence theory would seem to be out for similar reasons: logical self-consistency is also patriarchal and toxic. I think we can rule out pragmatism also, since the new left prefers academic theories to what has proven to work consistently. So what is left? Is there truth at all now? It appears that the new “progressive” left has decided upon truth by academic decree, with psychological coercion upon the masses to get them to follow along with the official interpretation of reality. Again, there appears to be a notion involved of being so special that one knows better than reality itself what’s what. Like the people who choose both boxes, I don’t pretend to fully understand their reasoning for maintaining an interpretation of reality through little more than fiat reinforced by persecution of alternative interpretations. But as for myself, I consider any of the outmoded philosophical theories of truth to what the left is pushing now—what is objective, what is rational, or what is demonstrated actually to work.

This new method of determining truth by following pseudo-intellectual academic fashion trends, pulling an interpretation of reality out of some Grievance Studies professor’s rectum, may have very dire consequences. If the civil cold war cannot be resolved by reason, which it obviously cannot (since reason itself is viewed as a tool of white patriarchal oppression), then if it isn’t decided by democratic elections, it will be decided by real civil war, with blood flowing in the streets and bodies hanging from lamp posts. But if it gets to that I assume that my side, the choosers of box B, will win, since the patriarchal populists have most of the weaponry, and also the lion’s share of the bollocks, let alone empiricism, rationality, and pragmatism. 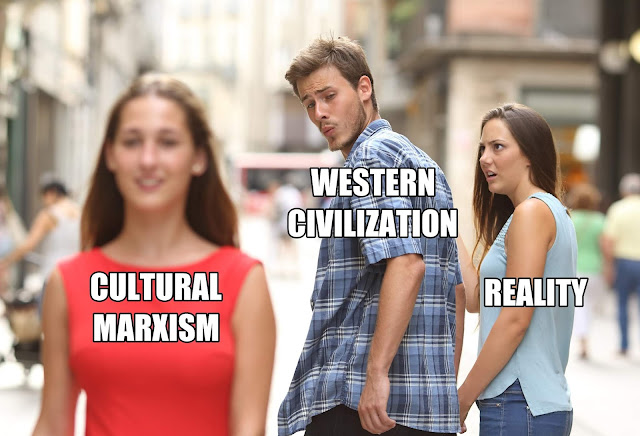