A Mind-Boggling Case of Shuffled Cards

Just for the Hell of It Dept.

Just recently I saw a little article describing how people on Twitter were in a mild uproar over the “paradox” or “theory” that one 18” pizza actually contains more pizza than two 12” ones. (It’s not a “theory” but simple geometry and algebra: A=πr², so an 18” pizza would have a total area of around 254 square inches, and two 12” ones would have a combined area of about 226 square inches.) The article describing this furor emphasized the dumbing down of the American populace, with some aspersions cast towards an educational system that lately seems more intent on indoctrinating young people into the cult of politically correct progressivism, than in actually educating them.

Even so, I have occasionally been mind-screwed by odd bits of factual information, and I would like to share one that leaves the pizza paradox far behind, where it belongs. It involves playing cards.

How many possible configurations of shuffled playing cards do you suppose there could be? Guess. No, come on, guess. A million? Ten million? As much as a billion? Even if there were as many as a billion possible orders of cards in a shuffled deck, it would be very unlikely that in your lifetime you would even come across two well-shuffled decks of cards with all the cards in the same order. And if you consult tarot cards the odds would be even less, since there are 78 of those in a standard deck, if I remember correctly. Anyway, have you guessed yet? No? Guess.

Let’s calculate it out here. If there are any of you who passionately hate math, and were astonished by the pizza paradox, I apologize. Go away.

As if that weren’t weird enough, one implication of this astonishingly huge number of possible shuffled decks is that it is probable that in all the history of the world and of playing cards, there have never been two well-shuffled decks of cards that have been identical. It may never happen, even if people continue to play cards for thousands of years. Even if it has happened through random chance or some mysterious synchronistic phenomenon of human luck, even so the same sequence of cards has not come up more than a very few times, assuming that the cards really were randomized and nobody was cheating. It boggles the mind.

Here’s another strange one that I find more weird than one medium pizza being bigger than two small ones—it’s one that I learned long ago, as a student studying marine biology. Let’s say that you scoop a cupful of water out of the ocean; it doesn’t matter which ocean (pick an ocean, any ocean…); and then you write your initials on every water molecule in that cup of seawater. (Let’s say you have an ultrafine-point pen.) Now let’s say that you pour your initialed water molecules back into the ocean, and stir the oceans well. Assuming that your cupful of water has been thoroughly mixed in with all the other water molecules in the oceans of the world, you could then scoop a cupful of water anywhere where there is seawater, and the number of molecules with your initials on them would be somewhere in the neighborhood of two hundred. 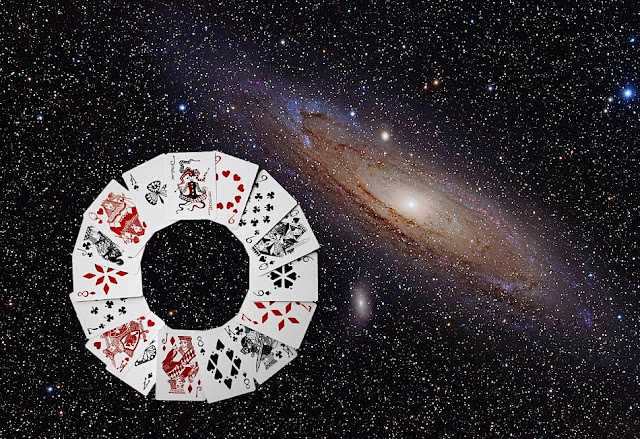