Basic Instincts of the Human Animal: Our Bestial Situation


All behaviour has an inherited basis, but strictly speaking it is only a potentiality which is inherited. An animal will respond in a certain way to a certain range of stimuli given a certain set of genes and a certain range of environments during development. —Aubrey Manning, from An Introduction to Animal Behavior

instinct
noun | `instiNG(k)t |
an innate, typically fixed pattern of behavior in animals in response to certain stimuli: birds have an instinct to build nests | maternal instincts.

For the umpteenth time, I maintain that the greatest scandal of 20th century psychology and anthropology was the failure of the “experts” to recognize that we humans are a species of mammal who are just as laden with innate animal instincts as any other species of mammal. Throughout the early-to-mid 20th century the basics of human behavior were accounted for with a kind of quasi-Hegelian dialectic, starting us off more or less with a psychological blank slate and then employing the common circumstances of infancy and childhood as a means of rationalizing the development of human nature from the blank void. By the late 1970s scientists had begun a new, more rigorously empirical approach to studying human nature, called cognitive science. This began making great strides towards a deeper understanding of the biology of human nature…until cultural Marxism came into fashion in the 90s and began stifling such research, for the simple reason that many of the results of it were politically incorrect. The new pseudointellectual fashion trend in academia rests upon the idea that everyone is essentially the same, and that human nature is merely a cultural construct, to be deconstructed and reconstructed in accordance with the new utopian paradigm of emancipatory politics. Thus the science of understanding biological human nature is actually retrogressing in some respects. I suppose this could become the greatest scandal of 21st century psychology and anthropology.

A major part of the problem is that it is extremely difficult for us humans to see ourselves objectively. We can’t see the forest for the trees, so to speak, and consider our natural feelings, urges, and spontaneous behavior patterns to arise from our cultural conditioning and/or own free will, whatever that is supposed to mean. Women find babies adorably cute just because they are adorably cute, or because the sinister patriarchy has conditioned women to be subservient breeders, not because of inherent maternal instincts—but then again, by the very same token, wild geese suddenly being inspired to fly south for the winter are oblivious to the fact that they haven’t just come up with the idea of their own free will. At least the geese have no delusions about patriarchal oppression compelling them to fly south against their own best interests.

Aggravating our relative inability to see ourselves objectively is the fact that empirical biology has existed only recently compared to the duration of human existence on this planet. Traditionally our understanding of our place in the universe has been based on ancient myths and legends, such as those incorporated to this day in all major religious systems. Also, some ancient myths have been replaced by equally fantastic modern ones, for example the early modern notion that humans are inherently rational beings, or the blank slate notion already mentioned, towards which followers of the new leftist paradigm wish us to regress.

But regardless of academic and political fashions, it is undeniable that some human behavior is universal to our species, or virtually so, being found everywhere from New Guinea to New York; with occasional exceptions to this universality being found in aberrant individuals and in societies that condition their members to act against their own natural urges. Most of this universal human behavior is also shared with other animals, especially with other members of our taxonomic order of Primates.

It is very probably safe to assume that most universal human behavioral traits, found throughout the world and persisting for thousands or millions of years, are the symptoms of inherent human nature, which is to say the instinctive behavior of the human animal. Practically any universal human quality may be considered hereditary, and thus genetically conditioned, even if it is not fully instinctive—for instance, the constant, automatic, and unconscious muscular adjustments involved in maintaining a standing posture, mainly handled by the spinal cord and not even getting as far as the brain, would be merely reflexive, not instinctive. Instinct requires the involvement of some degree of conscious perception; or in other words (one word actually), feelings.

A comprehensive list of our human animal instincts could potentially be a very long one; but many examples of human instinct are not so obvious, and could plausibly be explained as cultural conditioning, or universal, quasi-logical reactions to the trauma of birth, or some such, such as the ubiquitous human liking for bodily ornamentation. But naturally, there will always be some who will reject by any means necessary any fact which contradicts their cherished ideological beliefs; religious creationists won’t accept evolutionary biology at all, for example, regardless of an ever-increasing mass of evidence. So the list I intend to compile will avoid many of the ambiguous, merely plausible cases of instinct and will emphasize the ones I consider to be most obvious and/or otherwise important and noteworthy. Nevertheless, it will be a list too long to be published in one post. I won’t even start it until next time. Consider this the introduction.

Instinct is largely conditioned by hormones, which helps to account for the effects of adrenaline rushes, say, or periodic cycles of mood correlated with hormonal secretions. Bird nesting behavior, for example, is triggered by sexual hormones. We humans also have hormones aplenty, which differ between males and females in us as in pretty much every other species of vertebrate.

Differences in physical structure among animals would suggest differences in behavior also, considering that form and function are practically inseparable and strongly correlated. This observation inspired me to come up with Paññobhāsa’s Law, no doubt unwittingly plagiarizing someone long dead, which states that the degree to which one group of animals differs from another physically will approximate the degree to which they differ behaviorally. Applying this Law to male and female humans, it is evident that, biologically, we differ physically, which includes corresponding differences in hormones—which of course implies that men and women naturally think, feel, and behave somewhat differently. The aforementioned Law also would apply to different human ethnicities: for example, I have read that black men, who obviously differ physically from white ones on average, have 19% higher testosterone levels, and a much higher percentage over East Asian men. This accounts for significantly higher incidences of hypertension and prostate cancer in black males, and plausibly also accounts, in part, for higher incidences of violent crime, considering that in vertebrates in general, testosterone conditions, among other phenomena, aggressive behavior.

In addition to the smoking gun of hormonal secretions, behavior in which there is a known center in the brain for eliciting it is some fairly sound evidence for human instinct—emotions, language skills, musical appreciation, and certain phobias, for example, are known to be conditioned by special areas in the brain apparently designed by evolution for the specific purpose of conditioning these feelings and behaviors. The examples I just mentioned will be discussed in a little more detail in the list which will follow.

One thing to consider is that our instincts are not so much akin to the instincts of wild animals as they are to the often vestigial instincts of domesticated ones. Especially after our ancestors developed agriculture some 10,000 years ago, followed closely by towns and governments, they/we became essentially domesticated, practically as beasts of burden—not by farmers selectively breeding us, but by chieftains, warlords, and kings who dominated us and treated us pretty much like human livestock. Some of the evolutionary changes in our species over the past ten millennia are common to domesticated animals, or so I have read, and include greater docility and perhaps also reduced intelligence.

The whole situation is complicated somewhat by phenomena that may seem natural and instinctive, but are not—like the western aversion for eating insects, or bashfulness about being bare-chested in front of others. Anyway, enough introduction. The next installment will be the first half, approximately, of a long list of what I consider to be innate human animal instincts—or, to say it a little more politely, inherent behavioral aspects of universal human nature. 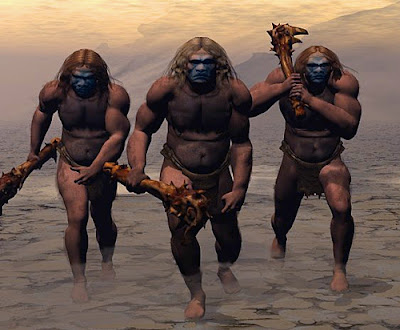