The King [of Spain] has allegedly stated that “the day the EU bans bullfighting is the day Spain leaves the EU.”  —from the Wikipedia article “Bullfighting”

Bullfighting is the only art in which the artist is in danger of death and in which the degree of brilliance in the performance is left to the fighter’s honor.  —Ernest Hemingway

History has shown, and continues to show, that people are not only not perfect, but that we aren’t even capable of being perfect, with the possible exception of a few saints or spiritual geniuses. We remain a kind of upgraded ape laden with animal instincts; and the more our culture denies our inherent animalistic nature, or rather is at odds with it—the less it fits us as a species—the more neurotic and frustrated and hysterical we become, and our civilization becomes, and the more ripe for an explosion.

Consider the Imperial Japanese, for example, during the period in their history between the turn of the 20th century and the mushroom-clouded end of World War Two. The Japanese have been, in modern times at least, relatively very polite, very cultured, very self-controlled, and very “civilized”; yet obviously there was a great mass of darkness seething beneath the surface of this restraint, considering some of the atrocities perpetrated by the Imperial Japanese soldiers. There was the infamous Rape of Nanking, for instance, and the refusal, unlike the much more vilified Germans, to follow the Geneva convention and not, for example, torture prisoners of war. In the war in the Pacific, when the Allied forces would defeat the Japanese military on one of the islands, the Japanese would customarily exterminate their own civilian populations en masse before committing group suicide, rather than allow any Japanese to surrender. I remember seeing a book in Burma about the methods of the Japanese Army in those days, and there was a photograph of the occupation of Singapore in which a Japanese soldier was holding down a Chinese man while another soldier was kicking him in the head; and the caption read that after the photograph was taken the two soldiers gouged the miserable wretch’s eyes out.

East Asians or “Orientals” in general may be very calm, mild-mannered, peaceful, and extremely self-restrained people, much more so than the average westerner…until they are pushed past a certain limit, in which case they may snap and run completely amuck (amuck itself being derived from a Malay word denoting the homicidal frenzy occasionally attained by these people). On the one hand some moral self-restraint is necessary in any human society, and always has been necessary, and thus no doubt this is allowed for in our instinctive behavior patterns (=human nature); in fact it is obviously more good than bad for a culture to emphasize civility and some modicum of virtue and moral restraint; yet the fact remains that if this restraint is too excessive and artificial it results in a pressure cooker situation which can easily erupt into mayhem. And even if the explosion into chaos is avoided, for example by conditioning everyone from childhood to be weak, apathetic, and timid, then the society is so artificial, so deviant from normal human nature or even common sense, that it becomes dysfunctional and ultimately unviable.

So a natural, sustainable society must take fundamental human nature into account, and that includes aggression. This has traditionally been channeled along relatively wholesome, or at least expedient, lines, such as athletics, military enlistment, and an acceptance of typical youthful rambunctiousness; although such channels are losing their therapeutic effect, so to speak, by being feminized or rendered more and more taboo and socially unacceptable (“politically incorrect”) in their more aggressive and cathartic forms. The “progressive” feminized left would prefer the feminization of civilization to the point that aggressiveness is greatly reduced if not totally abolished, but human nature continues to exist, and does not change by decree. Thus the cultural acceptance, if not glorification, of certain kinds of aggression and old-fashioned machismo should always have an accepted place. This could include institutions like, say, hunting, rough contact sports, regulated and possibly refereed fighting, maybe even dueling on “the field of honor,” and bullfighting. 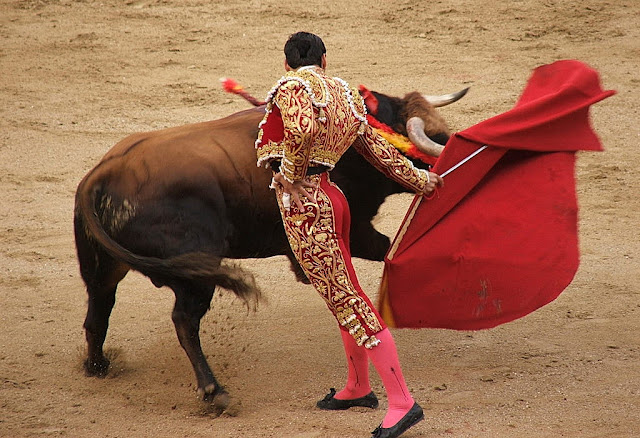 Of course, a good Buddhist, or even a mediocre one, should not endorse a violent bloodsport like bullfighting. For that matter he also should not endorse slaughtering cattle for meat and leather—hell, technically he shouldn’t even endorse the use of pesticides to protect the crops insisted upon by vegan purists. But with regard to bullfighting, consider: At least the bull has a fighting chance. Even the insects and mice poisoned to protect soybeans don’t get a fighting chance.

Personally, I think it would be more fair or just if the methods and materials of bullfighting were calibrated in such a way that the bull would have at least a 10% chance of winning, possibly even as high as a one-in-three chance of goring or trampling the matador. (Probably even more fair would be a fifty-fifty chance of victory for either side, statistically speaking, although that would probably be sufficient in and of itself to practically abolish bullfighting.) I remember reading somewhere, I think in Gibbon’s Decline and Fall of the Roman Empire, that a great bullfight was held in Rome during the early Middle Ages, before effective bullfighting techniques had been worked out, and the bulls won almost every fight. I am also reminded of Larry Niven’s old Known Space series of science fiction stories, in which large, brontosaurus-like creatures called Bandersnatchi, genetically engineered as sentient food animals, agreed to be hunted by humans for sport, so long as they were able to win one out of every three combats on average, out of the sheer boredom of being a sentient being with no hands and no capacity for developing technology or higher culture.

This sort of mortal combat, though arguably cruel and undoubtably violent, is arguably much less cruel than simply trucking cattle off to slaughterhouses where they have essentially zero chance of survival. Traditionally, the bulls killed in the arena are sent to places like orphanages, so the meat is not wasted anyhow. People who consider bullfighting to be cruel and barbaric, yet who nevertheless eat hamburgers or wear leather shoes, should consider this point. And even the vegans’ precious soybeans require the killing of many living beings, because life necessitates death.

To exist is to suffer, and everything that is born, dies. This is a harsh, unpleasant truth, and all the feminine wishful thinking and sensitive feelings in the world aren’t going to change that. One could argue that we can at least keep the unnecessary suffering to a minimum, which does make good sense; but most people lack the sense to see that completely disarming and unmanning a society doesn’t lead to less suffering in the long run, if only because such a castrated society isn’t going to last very long, and is likely to be replaced by a more vigorously, unapologetically virile and barbarous one.

Considering all this, I’m not even entirely opposed to the revival of (voluntary) dueling and gladiatorial combat. They would be not only a voluntary, though rather extreme, expression of human aggressiveness, but also a way of maintaining some masculine spirit, and a sense of courage and honor in a civilization seemingly hell-bent on emasculating everyone. Better to be honorable wolves than weak, defenseless, craven sheep with no concept of honor whatsoever, or who sneer at the very thought of it, for whom “bravery” amounts to little more than publicly admitting that one is a sexual deviant. And all justified in the name of “progress.”

At present bullfighting is legal in the USA only in the state of Texas, or so I have read, and even there I would assume that it is regulated to make it more humane than the more traditional Spanish or Mexican varieties; and of course dueling and gladiatorial combat are now illegal everywhere in the west. Nevertheless, vicariously participating in murder and gore in virtual form, e.g. in video games and Hollywood action movies, with slow-motion closeups and exaggerated splattering, is still very popular, indicating the human urge for this sort of mayhem. Better to limit our aggressive urges with rules and a code of honor than let them run rampant or try to deny or sublimate them altogether, which probably also results in aggression eventually running rampant, if only on the part of “uncivilized” barbarians, quite possibly traditionalist Muslim ones, invading and slaughtering a great flock of defenseless, “civilized” sheeple.

The trend, gradual but relentless, of feminizing and weakening western society and banning all that is dangerous or even harsh, is a long march toward terminal decadence and dissolution, regardless of ethical ideals. It amounts not only to cultural castration, but to removal of the spine. Better some more or less mainstream, socially accepted, voluntary brutality, involving only those who are so inclined, than mandatory universal softness and weakness, as the latter is civilizational suicide, if history is any indicator.

No matter how feminized “progressives” try to abolish survival of the fittest and the law of the jungle, and replace it all with compassionate and fair social engineering, Charles Darwin remains god-king. There is no escape from Darwin no matter what we do or don’t do; the fittest, including sometimes the most fearlessly aggressive, will continue to prevail, as is natural and fitting.