CHRISTIAN, n. One who believes that the New Testament is a divinely inspired book admirably suited to the spiritual needs of his neighbor. One who follows the teachings of Christ in so far as they are not inconsistent with a life of sin. —from Ambrose Bierce’s Devil’s Dictionary

Many people on the political, economic, and cultural left obviously consider themselves to hold the moral high ground in the current culture war, or war for western civilization, and see the left as a force for virtue and righteousness; and many of them go so far as to consider anyone on the right to be downright deliberately evil. One can see on mainstream media repeated assertions that all American supporters of US President Donald Trump are racists and malevolent Nazis. There are plenty of people on the right who consider all leftists to be deliberately evil also, though the old observation is still largely true, that right-wingers see the left as wrong and foolish, whereas left-wingers see the right as just plain bad.

Obviously there is much, much more to the current polarized situation than this, yet nevertheless both sides of the cultural divide consider themselves to be morally superior to the other side. It is an interesting ethical question to ask: which side, left or right, really does occupy the moral high ground? So considering that I’m an ordained monk and have some philosophical interest in the question, I decided to write about it.

Then, shortly after deciding that my next post would be on this issue, by chance I saw on YouTube a video of Dr. Jonathan Haidt delivering a TED talk on this very subject, comparing liberal morality with the conservative version. In fact Dr. Haidt is a social psychologist who has spent many years studying this question of politics intersecting with morality, and so, although I don’t watch many TED talks, I watched this one, and the man made some good points upon which I would like to elaborate.

For whatever reasons Dr. Haidt divided morality into five categories: non-harming or compassion; fairness; obedience (not just to the police or the government, but also to parents, elders, superiors, and maybe even traditional social values); loyalty (not just to the political/social ingroup, but to one’s family, one’s friends, one’s nation, one’s “tribe”); and what he calls “purity,” which evidently includes self-restraint. With regard to this last one, Dr. Haidt makes the interesting observation that while the right places much more emphasis on sexual purity, the left places more of it on food. To these five categories of morality I would add at least a few more, particularly truthfulness, but also humility and austerity, maybe even patience and generosity—though in Buddhist ethics generosity, or dāna, is usually distinguished from morality, or sīla.

Studies show that both the left and the right consider the first two of Dr. Haidt’s five virtues to be important, although the left tends to consider them slightly more important than the right does, at least in the USA; yet only conservatives, on average, see all of the five to be important components of morality. (I will get back to my additional virtues of truthfulness, etc., in due course.) Also, with regard to non-harming and fairness, the interpretations differ between liberals and conservatives: with regard to fairness, the leftist version of course emphasizes equality of outcome, due to a presumably compassionate desire to see everyone as essentially the same. Rightist conceptions of fairness place more emphasis on equality of rights, of protection under the law, and of opportunity—or at least see fairness along these lines without the admixture of equality of outcome. Further, newish leftist ideas of cultural and moral relativism, again a result of presumed liberal compassion, result in a reluctance to see moral distinctions or to see anyone as moral inferiors, except for the cultural Marxist oppressor class (white people) and heretics (especially right-wingers). With regard to non-harming, the left appears to be more inclined to include even inadvertent hurting of another’s feelings under that heading, especially if the hurt feelings are of a leftist. 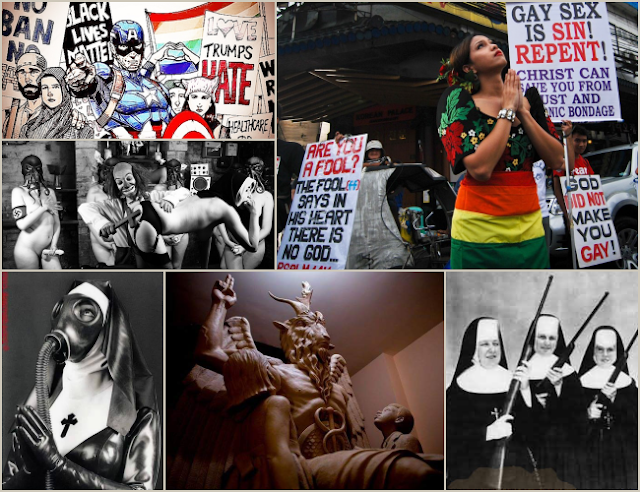 Thus it is evident that the left holds a moral high ground preferred by the left, and the right holds a moral high ground preferred by the right, and to some degree, at least, the difference is a matter of temperament or opinion rather than good vs. evil. The postmodern cultural and moral relativism of the ultraliberal left, however, does imply that the left’s moral high ground is to some extent a convenient matter of decree—though much rightist morality is also based on decree in the form of revelation-based religions like Christianity, and long-established cultural traditions.

With regard to truthfulness, the left, especially the new left, tends toward being flexible, relativistic, and relatively rootless. This is partly a result of the neo-Marxist attitude that deception is justified in the name of the glorious goal of social justice; and also a result of the postmodern idea that truth is merely a social construct—obviously, one can hardly have much reverence for truth if one does not believe in the valid existence of objective facts. Many new leftists believe that they can generate their own truth and then impose that manufactured reality onto everyone else, for everyone’s own good of course; compassionate feelings triumph over objective reality. We needn’t even dwell on the plain fact that liberal political correctness practically necessitates dissimulation and hypocrisy, at least in public. One could say that PC requires a kind of mandatory insincerity; though when conservatives unilaterally control the Overton window the hypocrisy is there too, just showing a false face in a different direction.

One other consideration regarding truthfulness is that the right is somewhat more likely to admit its own lapses from strict morality, for instance with regard to war and other forms of institutionalized ruthlessness. The right, especially the libertarian right, is more willing to acknowledge that in an amoral world strict morality may not be most conducive to prosperity or even to survival. (Marxism in particular can be just as ruthlessly amoral as anything produced by the right, though it is less likely to advocate frank honesty about the issue, especially in public.) The most likely alternative to acknowledged lapses from virtue on the right would be the adoption of an old-fashioned and arguably crude interpretation of ethics, like honorable war and the Old Testament doctrine of an eye for an eye. In general, the left rejects the very notion of separation of morals from government (though insisting, maybe ironically, on separation of church and state), which itself may be another practical lapse, deliberate or not, from truth and empirical reality. A major reason given by leftists for hating Donald Trump is that he is a moral inferior; whereas his supporters on the right emphasize his more rightist virtues or else don’t care all that much if he’s moral or not.

Another strange phenomenon of the recent left, briefly insinuated above, is reminiscent of Christianity in ancient Rome: love, compassion, charity (in the old-fashioned biblical sense of the word), and non-harming are emphasized in both “progressive movements,” ancient and postmodern, but too often only for the ingroup. Hysterical intolerance and vilification of heretics, that is, of those who disagree with the progressive dogma, may actually nullify their greater (some might say suicidal) compassion for the ingroup of chosen people, including barbarian enemies of the established civilization. Nowadays there are plenty of leftists who demand compassionate acceptance of Muslim migrants, for example, many of whom despise liberal western society, while fiercely refusing to accept members of their own society if they deviate from the preferred liberal Right View.

The right’s more traditional, more conservative morality is more inclusive of such ethical positions as military honor and austerity, and also apparently the old Christian ethic of forgiving enemies (although even the early Christians weren’t always very good at living up to the ideal). All in all it could be said that the rightist attitude towards morality is less compassionate than the leftist version because it is more “realistic,” more empirical, more likely to acknowledge some harsh realities of a harsh world—or rather to acknowledge them as something to accept with patience, and not necessarily to resist and fight against. A leftist may consider patient acceptance of the ways of the world, including the inevitability of suffering and death, regardless of what we do or don’t do, to be cruel and hard-hearted. So right-wing morals may be said to place more emphasis on stoic endurance of unpleasantness, which many on the left might see as totally foreign to morality as a whole.

As I have observed elsewhere, it seems to me that much or even most of what passes for morals or ethics on the left in recent years is really a case of unrefined feminine sentiment taking the place of any actual code or system of morality. For good and for bad, the sentiment is largely based upon compassion for the weak and resentment and spite for the strong and successful, even though the latter may be one’s own elders, one’s own family, or one’s own nation.

I’ve also observed elsewhere, relatively recently on this blog, and have briefly mentioned above, that the left has largely abandoned the notion of self-restraint as a moral issue, especially with regard to sensual indulgence. Sexual promiscuity or gluttony, for example, are being excluded from the realm of Right and Wrong among politically correct liberals. This is a classic case of the new left’s morality deviating from pretty much every major spiritual system on this planet, with the possible exception of satanism—which ironically has received some public support from liberals lately.

Summing up all of these considerations, I would say that the left traditionally holds a more feminine form of morality, and the right holds a more masculine form; and if both were relatively healthy it would maintain a healthy balance in western politics and culture, a kind of natural two-party system resembling the natural balance of the male/female symbiosis. I see nothing wrong with competing moral codes, so long as the competition is more or less respectful and fair. However, the political and cultural left has become hysterically intolerant in recent years, and in some respects, in my opinion, quite insane, which results in its own preferred forms of morality becoming degenerate and morbid. There are still plenty of relatively sane liberals out there, and the future of the left may depend upon them; but now there are too many who are willing to overlook the excesses and rampant hysteria of their comrades. The situation is out of balance, and the left needs to return to some semblance of old-fashioned liberal idealism, including freedom of thought and expression, and leave the intolerant neo-Marxism in the dumpster where it belongs.

A non-TED talk by me and Brian Ruhe on this topic, which may be better than this article:
https://www.bitchute.com/video/QbS7hhWeUnlZ/