Rely upon this then, all you who are here assembled, now is your great opportunity. The soldiers outside have their eyes fixed upon you; if they think that you are faint-hearted, they will turn cowards; but if you show them that you are making your own preparations to attack the enemy, and setting an example to the rest—follow you, be assured, they will: imitate you they will. May be, it is but right and fair that you should somewhat excel them, for you are generals, you are commanders of brigades or regiments; and if, while it was peace, you had the advantage in wealth and position, so now, when it is war, you are expected to rise superior to the common herd—to think for them, to toil for them, whenever there be need. —Xenophon, from the Anabasis

There are two extreme kinds of leader, two ends of a spectrum: the servant of the people, and the master or commander of the people. Both may be democratically elected, both may be conscientiously committed to serving their country, both may be restrained by constitutional restraints on their authority, yet the philosophy of each type is very different.

The liberal ideal of a leader is a person who is essentially the dutiful servant of the people who voted him, or increasingly her, into office. Such a leader must always please the majority, or at least the majority of the people who voted for her. This is a major reason why politicians in western “liberal” democracies are such outrageous hypocrites who rarely say what they really think. They cannot afford to be unpopular, because that would indicate that they are not doing the will of the people, and most likely won’t be reelected. (Some unelected leaders may be of the subservient variety also, but they have been rare throughout history.) Also, they can hardly afford to be particularly original or innovative, considering that they are to execute the will of the people, not their own will. Leaders of this type tend to be relatively safe, and relatively mediocre. They rarely accomplish anything great—which is just as well, considering that the will of the people is pretty mundane and unimaginative. In times of peace and prosperity, when everything is going pretty well, such liberal servant-leaders may be the best choice.

The other extreme type is perhaps best illustrated by a military commander elected by the troops, or at least the officers, of an army. A classic example would be the ten thousand electing new leaders after the old leaders were murdered by deceitful Persians in Xenophon’s Anabasis. The Greeks were in desperate straits, most of their high-ranking officers were lured to a “peace” meeting, captured, and decapitated, and they were, seriously, a thousand miles behind enemy lines. So naturally the Greek soldiers chose for their new leaders, including their new commander in chief, the men who were not the most popular or the most willing to please, but the ones most likely to lead the men alive out of Persian territory, with almost daily attacks from the Persians and others. It is significant that this kind of leader, once elected, may have the power of life and death over their subordinates, within reason, of course—if they prove to be psychopathic tyrants or, worse yet, totally incompetent, then they could be overthrown by a mutiny of exasperated soldiers. But such a commander, even if elected, might command the death of a soldier found sleeping or drinking on watch, or molesting a farmer’s wife. His purpose is not to please those under his command, but to lead them to victory. He might lead them in very unpopular directions, for example by initiating battle against a more numerous enemy or forcing them to march for days with little food or rest; but the men chose him to be their commander, not their servant. The only real requirement is that the commander command his men’s respect, or at least their confidence, well enough that they continue to do their duty by following his lead; and history shows that a commander can be quite inept and still continue to lead, due largely to the herd instinct of the average human. Naturally, this type of commanding leader is most prevalent in non-democratic systems, or in systems in which he is not likely be up for reelection any time soon.

Although both extremes may be democratically elected and bound by constitutional constraints, there are nevertheless some very important differences. In the first case a person is appointed as a kind of proxy executing the will of the people as a more or less humble servant; consequently an effective “leader” of this sort may be a weak beta type, or an agreeable and diplomatic female. A strong alpha with innate leadership abilities might be grotesquely unsuited to such a humble and subservient approach to governance.

The philosophy of the second type is more a matter of a democratic electorate, or at least an assembly of aristocrats or oligarchs, choosing the one among them whom they consider to be the most outstanding among all the rest, the one they consider to be the very best, the one in whom they have the most faith, the one they think can best lead the people to success in a ruthless and unforgiving universe. In a population of one million people, the leader would then be not just the representative of his equals but literally one in a million, the very best, the one of them all most suited to lead the rest. Consequently, the people presumably have faith that such a leader will make better decisions than they could make; that he should not do their will but, contrariwise, they should do his. He might introduce them to new and unwanted hardships, subject them to frightening risks, and make unorthodox, counterintuitive decisions, but after all, of all the people he was chosen as the most adept at promoting ultimate prosperity.

This second type is especially valuable and important in times of national crisis. The term “dictator” comes from the ancient Roman Republic, before the time of the Augusti, and originally denoted a man chosen by the Senate to lead the country in times of national emergency, especially a major war. For six months, in accordance with Roman law, he was authorized to be pretty much an absolute autocrat, because in times of crisis a strong, decisive commander will be able to accomplish what is necessary much more effectively than a room full of politicians, let alone public referendums. The solitary decisions of one military or political genius may save a country much more effectively, not to mention gloriously, than the careful deliberations of any number of wise, prudent, diplomatic pundits.

These two varieties of leader are extremes, with most modern politicians occupying some intermediate point on the spectrum, though of course the more liberal a nation is, the more like a servant or proxy the leader will probably be. Nevertheless, I maintain that the second variety is the superior type of leader, especially in momentous times, like maybe the times we are in now. Consider Captain James T. Kirk on the old TV show Star Trek. He was not particularly saintly or politically correct. He was not as intelligent as Mr. Spock, his first mate, nor was he as cautious as Scotty, his third in command, but he was the guy with the balls and the backbone to accomplish great things, exploring the unknown, and a fighter who was a force to be reckoned with. Despite his crude humanity he was obviously the right man for the job. As I have observed before, leaders who have gone down in history as “The Great” are almost always fearless alphas of the second type. And, as I suggested just now, we are arguably entered upon momentous times, and a time of national crisis, in which a strong, decisive leader is called for if our civilization is to survive.

The democratic left evidently prefer the first type of leader, who “leads from behind,” so to speak, much like their political messiah Mr. Obama. They are unlikely to unleash an alpha commander type of their own, and in fact are vehemently opposed to alpha commander types on principle—they’re the patriarchal oppressors, and all that. Nevertheless, of course, once leftism evolves into full-blown Marxism a non-democratic despot is simply the standard, as history has shown repeatedly.

The feminized decadent left especially wants to demonize, possibly outlaw, the dominant alpha male; but our species generates alphas for a very good reason: They have facilitated the survival and success of their people. 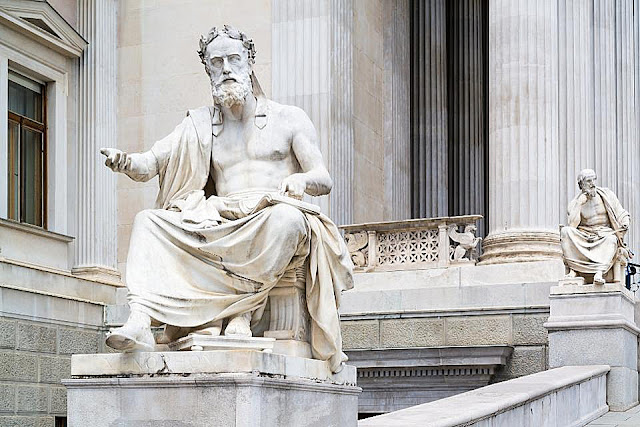 A very nice synopsis of the Anabasis, by professor John R. Hale 41:36

A few more quotes from Xenophon (who has a totally cool-sounding name in my opinion):

This observation, also, I have laid to heart, that they, who in matters of war seek in all ways to save their lives, are just they who, as a rule, die dishonourably; whereas they who, recognising that death is the common lot and destiny of all men, strive hard to die nobly: these more frequently, as I observe, do after all attain to old age, or, at any rate, while life lasts, they spend their days more happily.

There is small risk a general will be regarded with contempt by those he leads, if, whatever he may have to preach, he shows himself best able to perform.