Or: “The Tragedy of the Commons”

“We have to recognize that we are in a war for civilization.”  —Stefan Molyneux

The self-destructive nature of the policy to be discussed, or dynamic duo of policies, which is endorsed in progressive leftist ideology, may not be quite as simple and obvious as the monstrosity of feminists endorsing traditional misogynist Islam; but still, it’s worth pointing out, maybe, at least to those who are not progressive leftists. It’s really not that difficult to understand. It shouldn’t take a rocket scientist or neurosurgeon (or Buddhist monk) to figure it out. And it’s clearly self-destructive.

The thing is, that the new feminized, compassionate PC left favors a socialized welfare state, of course—and also, at the very same time, a society with open borders, with each country being essentially a borderless province of a Global Community to the extent that anyone who wants to move in and claim the rights of a citizen there should be able to do so, easily, regardless of just about anything else. Consequently now in the USA there are “progressive” state governments ostentatiously flouting immigration laws, and granting certain privileges, such as in-state college tuition and publicly funded health care, to illegal immigrants; and of course we all know something of the ongoing flood of undocumented immigrants into the EU, the so-called “Migrant Crisis.”

The viability of either of these institutions alone—a socialized welfare state, and a developed country with open borders—is itself rather dubious and open to question. With regard to the viability of socialism, thus far I am unaware of any great success stories. Pretty much the entire 20th century stands as a grim testimony to the wages of socialism as a new world order, with Venezuela, now in a state of borderline collapse into bankruptcy and anarchy, being a contemporary case history. History shows again and again how a man will work harder for his own benefit, and for the benefit of his immediate family, than he will for a more or less abstract population of equal comrades; it also shows how socialism fosters bureaucratic entropy, laziness, and parasitism upon the system, which essentially sabotages an economy. But more about this some other time.

Oh, but wait—I remember back before Bernie Sanders was swindled out of the Democratic race for US President, he cited Sweden as a success story of prosperous socialism. Well, what’s happening in Sweden then? For starters, the feminism which goes hand in hand with the socialized Nanny State has encouraged Swedish women to imitate men and to disapprove of the most feminine lifestyle a woman can embrace: bearing and raising children. So, largely because of this, the population of Sweden has gone into decline. From an ecological point of view this could be excellent; but unfortunately for a socialized welfare state it doesn’t work: you can’t have negative population growth because then more and more older people become dependent upon the state for support, with fewer and fewer younger people paying into and supporting the system. It’s a matter of fairly simple arithmetic. Consequently Sweden (and some other countries like Germany) have been constrained to import migrants from Africa and Asia, who for the most part are unskilled and uneducated, illiterate even in their own native languages; and as their numbers increase they become less inclined to assimilate into Swedish (or German) culture. They have become more of a burden than a benefit to the welfare state, and rape and other violent crimes have increased dramatically. Sweden is now, notoriously, the rape capital of Europe, with more than fifty Islamic “no go zones” where even the police are afraid to go. When I heard Bernie praising Sweden’s socialist utopia, I must admit that I lost some appreciation for the man’s common sense. But the mention of Europe’s immigrant woes serves as a convenient segue to the next point, which segue I now exploit. 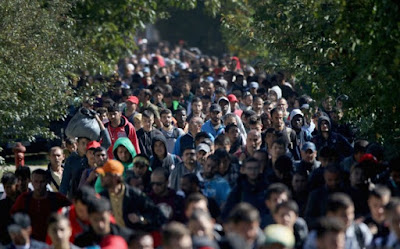 Open borders, with unlimited immigration, is in and of itself at least as dubious with regard to whether it is more beneficial or otherwise for a society. If the immigrants come from a similar culture, then there may be no problem, as was the case during the first two centuries of the USA’s existence; but when the immigrants come from a very different culture, especially if they come in such numbers that they form sizable subpopulations with no great need for assimilation, then the cultural values which bond a people together tend to break—in fact, some of the migrants may be positively hostile to the established culture, thereby rendering the immigration rather an invasion. Furthermore, an influx of unskilled, uneducated people, who may also have more limited cognitive abilities in general, is hardly likely to improve the overall quality or tone of a society; and if an ignorant rabble with little appreciation for a democracy’s cultural heritage forms a significant voting bloc (and left-leaning political parties appear to favor this), then we may have an ignorantly directed and unpatriotic democracy dedicated to taking money from the rich and turning it into free handouts for the dominant mob.

But let’s say, for the sake of argument, that one or the other alone—a socialized welfare state with strict (and enforced) immigration laws, or a libertarian, capitalist nation-state with minimal government welfare and no immigration laws—could prosper. Maybe one can, somehow, for all I know. But both at the same time present a new and titanic problem that shouldn’t be too difficult to foresee. It’s about as easy to figure out as the fact that people taking more out of a welfare state than giving into it will cause its economy to tank.

Let’s imagine a developed, relatively prosperous welfare state with open borders. All nations are not as fortunate as this; some nations, relatively speaking, are squalid 3rd-world hellholes. Most of those are hellholes not because of lack of resources so much as for cultural or “ethnic” reasons. Anyway, lots of people in said hellholes would very much like to live in the prosperous, comfortable, borderless welfare state. They could live at a much higher standard of living just by subsisting on welfare benefits than they would by herding goats, or otherwise working their ass off (so to speak) in their native country. And seriously, living on welfare benefits is the most likely option for someone who is unskilled, illiterate, and can’t even speak the prevailing language of the borderless welfare state. Naturally, there will be a flow of migrants into such an inviting paradise. (Free food! Free money! In Sweden they even give you a free house!) In fact, the incentive to move there will remain so long as the borderless welfare state is more prosperous and accommodating than the 3rd-world countries around it. Thus, we have a case of water seeking its own level: the flow of migrants continues until the borderless welfare state is swamped with unskilled hungry mouths, and it becomes as miserable and squalid as the hellholes they escaped from. Equilibrium will have been reached. People won’t want to go there anymore. It’s as simple as that.

But of course, compassionate leftists don’t want to think about this. They can’t think about it, because thinking about it would be racist or otherwise politically incorrect. Instead, they actually endorse increased immigration, for example by assisting Africans to cross the Mediterranean Sea into Europe, for humanitarian reasons. Simple arithmetic is only a cultural construct anyway, and an insidious tool of patriarchal oppression. Furthermore, if western civilization goes bankrupt and/or collapses, well, good, because white people are bad anyway. The left has metamorphosed into a well-intentioned hysterical suicide cult. But, no need to acknowledge this since, as has already been noticed, objectivity is a tool of patriarchal oppression. 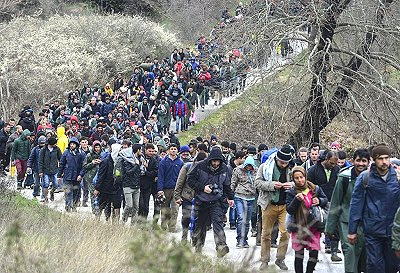