Two Purposes of Cultural Marxism: Where Draw the Line?


The woke but godless, the arrogant but ignorant, the violent but physically unimpressive, the degreed but poorly educated, the broke but acquisitive, the ambitious but stalled—these are history’s ingredients of riot and revolution. —Victor D. Hanson


In recent years I have wondered repeatedly about the real purpose of so-called Social Justice, alias cultural Marxism, identity politics, intersectionality, Soycialism, etc. etc. The movement (I suppose that’s what it is) is so irrational, hysterical, and fundamentally delusional that it couldn’t possibly lead to a sustainable system, not directly anyway; and so I have wondered how many of its leaders, creators, and promulgators actually take it seriously as something actually progressive, that is, conducive to progress, to something better than what it is intended to replace. Just recently I arrived at some clarity on this rather muddy and insane issue, and so I intend to share my thoughts, just in case others of you are even slower on the uptake than I am.

Ostensibly, the purpose of all the intersectional feminism, gay and trans activism, academic grievance studies, cancel culture, anti-police rhetoric and posturing, hatred of the President and those who voted for him, vandalism of historical monuments, hatred of the US Constitution, political correctness word taboos, desire to erase and rewrite the history of western civilization, teaching masturbation and gay pride to toddlers, censorship on social media, hatred of white men and masculinity in general, preference of Communist China to the USA by American citizens, insistence on socialism and social engineering, attempts to abolish the nuclear family, diversity quotas replacing meritocracy, and on and on—the ostensible purpose, I say, is to improve society and make it more inclusive, open, egalitarian, equitable, compassionate, peaceful, and just. On the other hand, all this stuff has been destabilizing American society to the point that we may be closer to actual civil war than we have been since the Civil War in the 1860s. Obviously, plainly obviously, the Social Justice policies of the no longer liberal left are not improving America or anywhere else that I am aware of, and are driving western civilization into a downwards spiral of degeneracy, weakness, and dysfunction, with an easily extrapolated endpoint being civilizational collapse. So how can so many people really believe that all the political correctness hysteria is actually conducive to improvement? That has been the question (among others) that I have chewed on for a few years now.

The issue extends all they way back to the first half of the 20th century, or even earlier. The notorious Frankfurt School was striving to accomplish much of what is so pervasive now: feminism, the mainstreaming of homosexuality and other sexual aberrations, mass importation of non-western immigrants, racial identity politics, leftist control of academia and the mass media, mainstream bias against patriotism and Christianity, etc. So even when reading about this stuff I couldn’t help but wonder: How much of it is supposed to be an improvement, and how much of it is simply geared to destabilize and crash western society—presumably to allow some form of radical Marxism to take its place? It seemed to me like there was no clear line separating the two purposes, and some of the goals striven for by the left paradoxically had both purposes simultaneously. For example, endorsing hedonism and sensual depravity can be viewed (by leftists especially) as a more “enlightened” approach to libertarian freedom of the individual…while at the same time it can be viewed by cynical Marxists on the same side politically as just another way of weakening a previously strong culture for the purpose of undermining it.

What positive purpose is served by stirring up social strife: left against right, women against men, one race against another, young people against old people, modern people against their ancestors, even indoctrinated white liberals against themselves? Does all this represent what the better world of the future will be like, or to usher in a leftist Utopia after the enemy factions have been subtly and gradually crushed, or is it all primarily just the ruthless destabilization of the ancient regime by any expedient means? It has long occurred to me that most leftists themselves couldn’t really answer this question, and most of them, I would guess, give it little thought, if any.

Some of the goals of the new left are straightforward, like the push for socialized healthcare (as a primary step towards socialism in general), and the preference of globalism to nationalism and patriotism. People ignorant of socialism especially may see all this as a worthy goal in and of itself, and an improvement on the old classical liberal status quo.

And no doubt some of it, at least, serves both functions, of improvement and destruction, simultaneously. Destabilization of the family unit, for example, undermines the old traditional system while preparing the populace for sole allegiance to the false god of socialist government. This goal of eliminating all allegiance to anything except the globalist establishment-run Socialist State also applies to the efforts by the left to attack, weaken, and stigmatize Christianity—which ironically, in its more radical days, played a similar role in the collapse of the Roman state and of ancient classical civilization, being anti-patriotism, anti-tradition, and even anti-marriage. (The Roman government, towards the end in the west, was even passing emergency laws against wealthy Christian career virgins leaving their family fortunes to tax-exempt churches, thereby further impoverishing an already traumatized economic order.)

But how on earth does something like male sexual deviants dressed as women reading stories to toddlers help society? How does it help to usher in a collectivist Brave New World in any way other than simply derailing the old value system? How could anyone seriously think that this would strengthen or improve a civilization? Are almost all leftists totally devoid of a knowledge of history, and common sense?

Just recently, while considering the protests, demonstrations, and riots in America and elsewhere supposedly triggered by the death of an intoxicated criminal named George Floyd under the knee of a police officer, I figured that there must be three main groups of people involved in this attempt at a radical revolution, with three different points of view on the issue.

First there are the people at the top, the globalist establishment, the billionaire financiers who own most of the influential politicians, the masters of the looming New World Order. These are the people funding the demonstrations and riots, paying the corporate media to fan the flames, donating generously to largely Marxist universities and “progressive” causes, paying the high-profile political hacks to praise and defend the rioters and hysterical mobs. They are knowingly and willingly doing what they can to tear down what remains of the classical liberal foundations of modern western civilization, in order to replace it with the socialized globalist New World Order, with an ignorant rabble dependent on socialist handouts voting and keeping the plutocracy in power. Also among this group of deliberate destroyers would be individuals (many but not all) in groups like Antifa and Black Lives Matter who are nihilists and/or accelerationists only interested in burning down the status quo, without any concern for what replaces it.

Second would be the majority of the movement, I assume, which would include all those college educated (indoctrinated) “progressives” and “liberals,” including vast hordes of amazingly ignorant urban and suburban young white women, who think that all the irrationality and hysteria prevailing nowadays are somehow improvements themselves, or very near to improvements anyway. These folks have somehow been persuaded, by indoctrination and propaganda—or who knows, maybe personal character traits, I don’t know—that recruiting transsexuals into the military, for instance, is somehow an improvement on having soldiers who are actually tough fighters. They also believe that eliminating police forces will somehow reduce crime, even though reduced law enforcement is currently causing crime rates to escalate. They also think that drag queens reading stories to kindergarten children about how boys can be princesses too is somehow conducive to a better and happier social system. At least the first group know what they are doing, but this second group are just a vast multitude of pawns and useful idiots. These are the same people, by the way, who believe all the anti-Trump propaganda and hoaxes generated by the extremely corrupt mainstream media which the plutocrats manipulate to serve their own purposes. They simply believe and follow what they are told, and the successive failure and exposure of each hoax does not phase them. Probably even most leftist intellectuals, like university professors, would belong, ironically, to this class of sheeplike useful idiots.

Finally there is a third group, which is probably less numerous than the second group, but still very numerous, and that is the more or less apolitical rabble of “marginalized groups” and the welfare class. They are political only to the extent that they are willing to vote left to support the welfare state, and blame the right, or forces on the right, for whatever they are told to blame them for; otherwise they are more or less innocent of political attitudes and don’t care what the ultimate purpose of “progressive reforms” are. They are unsuccessful and dissatisfied with their lot in life, so they are easily persuaded to blame Whitey, or Trump, or racist police, or whomever they are told to blame, and can be manipulated into running amuck if the plutocrats paying the money and pulling the strings decide to manipulate them. Mainly they are used as a leftist voting bloc, although, as has been demonstrated recently, they can also riot conveniently for the sake of making the other side look bad, or for intimidating political opposition. Most of the people looting shops in Minneapolis recently, for example, were not looting because George Floyd died under the knee of a white policeman—obviously, one does not protest police brutality by stealing a television or several pairs of designer athletic shoes—rather, they were looting because their anger and resentment had been stirred up by agitators, and then they were led to believe that they were justified in committing atrocities. Or, alternatively, they just figured with all the (orchestrated) chaos that they could steal stuff and get away with it. So this group is exploited even more than the second group of indoctrinated progressives, when the moment is ripe, while being convinced that it is the right, personified by Trump and evil Whitey, who are exploiting them. They are exploited by the first two groups, and unwittingly serve their purposes.

Even so…I still have enough faith in the fundamental common sense of human beings, or at least of Americans, to resist the contagious disease of neo-Marxism—with most followers of it being so befuddled that they don’t even know that they are supporting a form of Marxism, the most genocidal political and economic system of modern times. I still have faith that most Americans will refuse to sell out to this nonsense, or worse than nonsense, and refuse to believe the propaganda that saturates our culture. If America falls to cultural Marxism and NWO globalism, then the rest of the world goes with it. I am optimistic, but I suppose we’ll find out for sure in November. 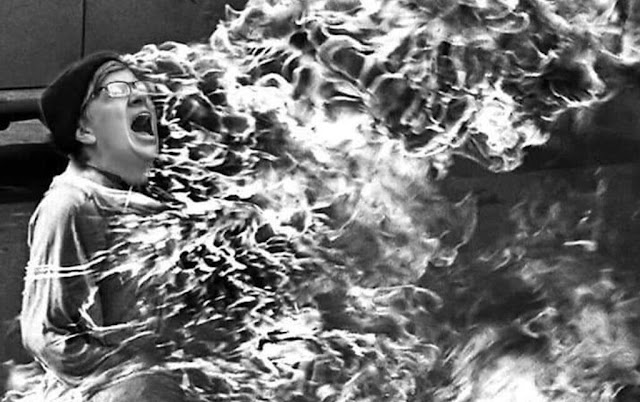