The fundamental concept of the pagan and ‘solar’ view of the world is that spirit is power and power is spirit, in conformance with an insoluble synthesis.

I have been discussing Julius Evola’s remarkable book Pagan Imperialism for the past few posts, and have fairly well covered the first half of the title, the Pagan part. With this post I begin placing more emphasis on the second word in the title, Imperialism. And yes indeed Evola was an imperialist extraordinaire.

When I say that Evola was an imperialist, what I mean and, more importantly, what he meant, is that he believed in an extremely right-wing type of governmental system, practically the opposite of communism or the left in general. Thus instead of the all-controlling central government favored by most people on the far left, Evola preferred a kind of feudalism, with a relatively weak, decentralized national government, overseeing various individual ethnic cultural states ruled by elites, which, however, would be led by a deified God-Emperor. The God-Emperor would not be deified merely by decree, mind you, but would be literally a Nietzschean Superman who had risen by his own innate superiority to the level of a veritable demigod, and who would infuse his society with his own exalted spirit. Evola, like fascists in general, had no use for equality, and even went beyond most of the fascists of his time (and of ours) by rejecting out of hand any sort of socialism whatsoever. Thus he did not wholly accept the Fascism of Mussolini or the National Socialism of Hitler, considering their fascism to be inadequate, not going far enough, and called himself a “superfascist.”

Evola’s Italian ethnicity was probably a significant contributing factor toward his belief that classical Roman civilization was representative of the end of a kind of Golden Age, of a truly great “Aryan” (or more technically Indo-European) civilization, though this belief is certainly understandable. And for fascistic reasons of his own, he considered the Empire to be even better than the Republic, largely because it had a more stratified social hierarchy, and of course because it had deified Emperors. Also it was less nationalistic because it contained entire great civilizations within it, subservient however to the Empire and the Emperor. The great “Aryan” civilizations that he spoke of with the most respect were the Vedic, Persian, Roman, and finally the feudalistic society of the Middle Ages, with a special reverence for the Vedic, coming closest, in his opinion, to the primordial Aryan spirit, including a hereditary caste system.

Though Evola regretted the rise of Christianity and the extinction of the Classical, Pagan, and much more Aryan cultures that preceded it, he did acknowledge the Medieval period as a last stand for Aryan civilization, and the last significant manifestation of it. And before the Middle Ages had progressed very far an even more glorious and fascistic order arose to counterbalance the pernicious effects of Christianity and general degeneracy: the Holy Roman Empire, led by a Kaiser, or Caesar. These two forces, the feminine, semitic, and egalitarian influences of the Church, and the masculine, Aryan, and hierarchical influences of the new Empire, waged war throughout the medieval period over who had the right to dominate Italy in particular, Europe in general, and ultimately all of Christendom.

In this historic power struggle between the Pope and the Kaiser, Evola strenuously sided with the Kaiser, and would have been a staunch Ghibelline during the days when the struggle was still alive. Instead of separating church and state, both sides were attempting to unify the worldly and the divine in a sense: the Church by trying to control the civilization in a partly socialistic, partly patriarchal theocracy, and the Empire by restoring the notion of Divine Right of Kings and the idea of semi-godhood in its rulers, if not full godhood—also a kind of theocracy, though this also had degenerated from the presumed Aryan Golden Age, the age of true heroes, and was far from perfect.

The God-King Evola yearned for, which he believed really existed in ancient times, would be a return to James Frazer’s notion in The Golden Bough of a ruler being the personification of his entire people and nation, and the intermediary between gods and men, the representative of each to the other—not God become man like the deified founder of Christianity, but rather Aryan man become a Pagan god.

But then came the Reformation, which turned Christianity from a tolerable compromise with Aryan virtues back to a feminine, semitic, democratic, and socialistic mindset, which in turn spawned the abomination (in Evola’s view) of the Enlightenment. Personally I have considered the Enlightenment, the western intellectual movement of the 17th and 18th centuries, to have been a mixed bag of real improvements and seeds of decline and degeneracy; but Evola positively abominated it as a death knell for all that he considered worthy of respect. He disdained most of its basic tenets, including equality, democracy, and the destruction of “superstitious” myths which unify a people behind their God-King. He saw that spiritual unification as key to any really successful society.

Thus Evola considered secular modernity to be little more than a terminal degenerative disease, and he called for a true Counter-Reformation in the form of a return to hierarchy, aristocracy, nobility, and true autocratic monarchy, with the elite being truly superior in a more or less Nietzschean sense, with an utter rejection of all that smacks of Christianity, which would include democracy and anything resembling a welfare state. The very poor should be supported by private charity, or possibly allowed to starve and withdraw their inferior traits from the population, and Evola evidently didn’t care very much which of the two it was.

Evola had the same disdain for materialism as did his friend and fellow anti-modernist René Guénon. For both men the metaphysical was at least as important as the physical, the higher powers being more powerful than mere elemental forces, and with a true Aryan aristocracy channeling these higher powers for the benefit of the race and the land—blood and soil—though what nationalism Evola endorsed was actually based on neither of these.

He envisioned not just an arbitrary social aristocracy, with one’s class being a matter of mere birth, but rather a class endowed with true superiority of consciousness and spirit. Evola placed his ideal true Aryan noble as far above the masses as the masses themselves are above quadrupeds. Perhaps ironically, his book on early Buddhism, The Doctrine of Awakening, applies this same social chasm between ordinary laypeople and the initiated adepts of the Buddhist monkhood. (This is one of the many reasons why Evola favored ancient Buddhism: it involves a hierarchy of initiated adepts.) Though it seems to me that much of this is ideological dreaming on Evola’s part, especially with regard to politics: history does show that the best, especially the best in a spiritual sense, do not always rise to the top, and in fact they usually do not.

Evola saw an essential need for a society to be unified by a common spirit and common ideals, rendering such a society a living, well-functioning organism consisting of specialized and unequal members, not just an assemblage of equal, alienated, interchangeable individual atoms. The common spirit and ideals must furthermore be noble and exalted, representing a higher principle than that of a mere individual man, and which allows for spirit to enter into society from above. In his own words, “This Empire must be conceived using the analogy of a body which has become a unity under the dominating synthesis of a soul.” The communists also envision a society unified as a kind of great organism, but they see it more as a machine made of interchangeable parts, or a colony of worker insects with a virtual hive mind; Evola on the other hand envisioned a body composed of different and specialized cells, and with the entire fabric unified and animated by an exalted spirit or soul, largely if not entirely flowing from the magnanimous heart of the exalted God-Emperor.

Evola’s conception of the autocratic dictator was far beyond that of Hitler, as the former’s idea of the Emperor was a Nietzschean Superman, a Man of Destiny, not only ruling the people entirely by his own vision and his own decree (though allowing his elite vassals much liberty so long as they fulfill the ideals of the Empire and show him fealty), transcending even blood and soil, transcending every merely nationalistic ideal until the entire nation is simply an outward manifestation of the God-Emperor’s own will. Perhaps if an Egyptian Pharaoh were also an inspired genius, a military hero, and an exalted spiritual adept all at the same time such a vision might have been realized in the past. Evola even considered such an Emperor, risen to the top by his own merits, to be likely to manifest psychic powers. The ruler in fact would be a kind of messiah, “…the powerful reality of the superior and surly more-than-human individual, who finally becomes one with the powers of the ‘supraworld.’”

This level, however, can only be maintained by one in whom—in accordance with the expression just used—superiority is not based upon power, but power upon superiority….Here the ruler is not so much a specific mortal being, but rather a universal element, a cosmic force.

It strikes me as ironic that Evola glorified the Roman Empire, or rather its Cult of the Emperors and all political authoritarianism of it, considering that the Empire in reality was pretty much of a semi-dysfunctional shitshow, maintained by the old bureaucracy of the Republic and with occasional interludes of wise, or at least benevolent and competent, Augusti, with the best of it occurring presumably during the reign of Octavian Augustus himself, and the Pax Romana of Nerva through Marcus Aurelius (96-180CE). But Evola may have had little use for the recorded data of history, preferring an uplifting mythos and the glory of the exalted soul of his imagined Aryan Emperor.

“The Nation,” “the People,” and “the Will of the People” were all illusions for Evola, all just reifications of Platonic universals. What he viewed as necessary was a force from above, and willing loyalty to it. “The People” is not an entity so much as a conveniently generalized assemblage of individuals; the State becomes a single real unit only when identified with a single person, the superior man who is worthy to claim “I am the State.”

But more about the ideal fascist state next time, in the final installment of this discussion of Evola’s strange and remarkable book. 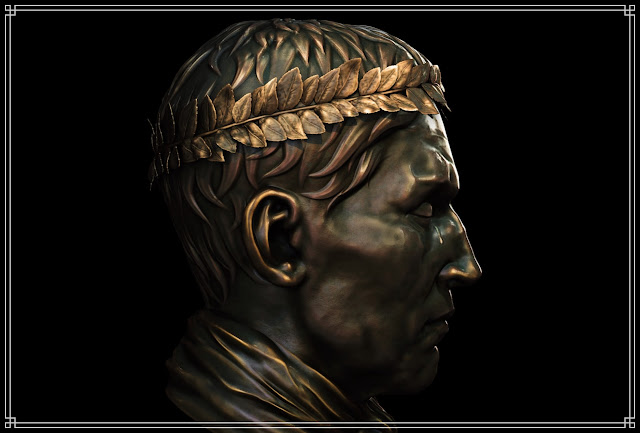