On the Decline and Fall of Liberal Religion

Today the liberal denominations of Protestant Christianity substantially downplay the supernatural and the wrath of God….Even with liberal Protestant churchmen, there is often an embarrassed silence regarding the efficacy of petitionary prayer, which is a magical practice by any reasonable definition (such embarrassment is not seen among conservatives). —George P. Hansen, in The Trickster and the Paranormal

This post has been written at the request of a very nice supporter. The topic is one that is discussed occasionally on my appearances on the Brian Ruhe Show, since it is one of Herr Brian’s favorite topics of discussion, though it has not received much attention at all on this blog, beyond mention of the particular case of decadent western Buddhism. The decline and fall of western Buddhism—or rather its state of being practically dead on arrival, from the very get-go, is a recurring theme here, and is considered from various angles. But the same principle of secular humanism and, more recently, neo-Marxism, pervading and subverting religion in the west applies to all spiritual systems, especially those sects and denominations favored by leftists.

The very nice person who suggested that I write about this even went to the trouble of sending me a few links to recorded church services at a Unitarian place in South Carolina. I could stomach about half of one of them, which may be viewed by the abnormally open-minded, here. I made it to the part with the emotionally bruised lady giving an impassioned speech about a certain bully President of the United States whose name she would not mention. That was enough for me to get the gist of it, although I was also sent a clip, I don’t know if it was from the same church, of children being encouraged to step up and announce (or maybe it’s called “witnessing” or some such in Christianity) that they are transsexual. Anyway, I’ll make some observations on the church service and then move on to decadent liberal religion in general.

First off, the first religious teacher to ascend the pulpit is a female—which itself may be an early warning sign. Then she announces to the congregation the “Social Justice quintuple dip,” which, although it mainly has to do with donating to the church and to charities, also involves donating to the local chapter of the League of Women Voters, which of course is a decidedly leftist organization. Then come the “six action steps” quoted from the president of a chapter of the League, which are all about voting (the service apparently taking place before election day). A male pastor does take the stand after a short time, although his “sermon,” if that’s what it was supposed to be, was one of those long winded speeches that don’t say very much, like the kind made by most politicians. It’s mostly “empowering” stuff, intended to encourage the congregation and make them feel good about themselves, and to exhort them concerning communal living—everyone is important, and we should all share our lives, and our joys and sorrows. The lady teacher comes back for more, and eventually introduces a rather sensitive-looking woman who delivers a kind of impassioned speech or sermon about what a horrible bully _____ is, not naming President Donald Trump out of either a desire not to badmouth someone directly, or possibly out of some kind of holy dread. This was enough for me to get a general idea of what goes on at such places, and so I turned it off after a few minutes of indirect badmouthing of _____.

During the half hour or so that I watched this church service, I remember no mention whatsoever of Jesus or even of God. It was mostly about social service and voting; and although there was occasional lip service paid to being politically nonpartisan, the folks involved were pretty obviously liberal AF. Although Jesus did not make it into the sermons, there was dutiful mention of “diversity” and of “responding to systems of violence and repression,” as well as badmouthing of the President, _____. 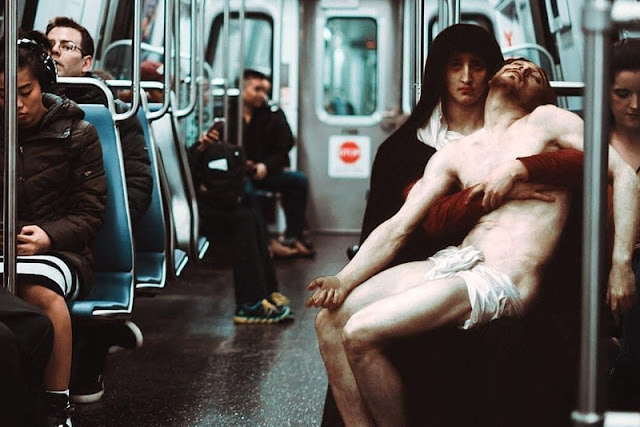 Now of course this kind of pseudo-religious leftism is not limited to American Unitarian churches. I have been told by a Methodist that Methodism is at present in a kind of schism over LGBT+++ and abortion issues, that is whether to be pro or con, that is, whether to defy the teachings of the Christian Bible, supposedly the divine Word of God, or to follow them. The Methodist church I go past in the city of Fremont has obviously made its choice, as it proudly flies a queer rainbow flag in front of the building. And this is not just limited to liberal Protestant churches either, or to Christianity in general, which has always been rather communal and leftist: it applies to pretty much ALL religious movements to be found in the west, including Judaism, Hinduism (especially Krishna Consciousness and what passes for “yoga” in the west), New Age, certain forms of neopaganism (especially the feminized forms), and of course also western Buddhism. I can’t really speak about Islam and some of the other religions because I have so little experience with them, but I assume none of them is totally free of taint. I’ve mentioned on numerous occasions that the typical Dharma hall in the west lately is probably more inclined to hold discussions on racial and sexual diversity, systemic oppression, and global warming than it is on the life and teachings of Gotama Buddha.

A common trait of this new kind of leftist quasi-religion is that the leaders tend to be feministic female types (often lesbian) or else wimpy beta males. This is “liminal” and could be conducive to spirituality or at least to decreased mundaneness, as it breaks down the worldly natural polarity between masculinity and femininity; although in this case it began with a sort of New Age femininity, emphasis on heart rather than brain, and the communistic emphasis on standardized weakness and mediocrity—socialism of course is keen on leveling everyone and denying differences. Another common trait is that many of the followers of these ultraliberal “spiritual” systems are more conversant with mainstream leftism than with their own professed religion, and simply cannot tell the difference between the two. Liberal western Buddhists, and I assume the liberals of all western forms of “religion,” seem to assume that the enlightened founder of their professed system could not have been politically incorrect by 21st century postmodern standards, and so any words found in scripture that run contrary to leftist “social justice” are to be ignored as corrupt and apocryphal. Or, still worse, they consider the enlightened founder of their professed system to have been imperfect and culture bound, even with regard to his knowledge of human nature and basic ethics, and thus less “woke” than the average postmodern dilettante.

Political and cultural leftism in the west is gradually being subsumed into neo-Marxism, alias Cultural Marxism, Social Justice, emancipatory politics, ultraliberal fucked-up insanity, etc. etc., which is a mutated form of Marxism, which of course traditionally has been atheistic, materialistic, and anti-religion. Essentially what is happening is that the actual religion in liberal churches and Dharma halls is being replaced by activistic social justice, i.e. neo-Marxism, more or less like religion in China is being controlled and modified by the Chinese Communist Party, changing the words in the Bible for example, or replacing an image of Jesus over the altar with one of Chairman Xi. It is important to bear in mind that Marxism tolerates no rival faith or belief system, including even faith and belief in one’s own family—hence destruction of the nuclear family is a perennial theme in the various forms of socialistic thought—and so religions are being converted slowly into traditional religion-flavored radical leftism.

Julius Evola, brilliant and eccentric fascist that he was, considered all this sort of rot to be symptomatic of a feminine and “telluric” kind of mentality typical of women and Hebrews, forming a kind of social polar antinomy with “solar” Aryan masculinity in the west. Regardless of his philosophy, it does appear that this sort of mentality has become parasitic on traditional religious systems, and will ultimately destroy them, as of course only neo-Marxism or “Social Justice” is allowed as a belief system. Emancipatory politics has replaced actual emancipation—from desire, from egoity, from the world, the flesh, and the devil. Hell, even the teachers don’t believe in miracles or enlightenment.

The bright side of it all is that such a spiritually feeble sort of religion is hardly likely to survive, much less thrive, as it is not even supposed to survive, except possibly as a variety of Marxism. Liberal churches are closing throughout the west while conservative ones increase in popularity and attendance. In fact the most conservative religious groups are winning the Darwinian game of survival of the fittest, and are fertile and reproducing—being fruitful and multiplying—consider the Amish. These more conservative religious practitioners are probably getting real spiritual benefit too, following traditions going back to a saint or a sage instead of wallowing in neo-Marxist policies intended to lead people towards a spiritually bankrupt Brave New World, with maybe some elementary meditation technique replacing tranquilizers like soma.

I may as well add in conclusion that many people on the right especially see the takeover of liberal religion by spiritually bankrupt cultural Marxism as a kind of centrally orchestrated conspiracy to undermine and overthrow western values and western civilization, although I see it more as an organic symptom of decadence. Good times make soft men, and soft men make bad times, and that is pretty much an inevitability regardless of any particular group’s agenda. If it isn’t one group, or one conspiracy, it will be another. So the main defense we have against the rot of spirituality in the west is not focusing our attention on one antagonistic outside group in particular, but on our own, for the sake of strengthening it, and beginning by strengthening ourselves. A group will be strong when its own members are strong, and not until then.