On Advanced Prehistoric Civilizations, Space Aliens, and the Alleged Genetic Engineering of the Human Species (especially the third one)

Now it came to pass, when men began to multiply on the face of the earth, and daughters were born to them, that the sons of God saw the daughters of men, that they were beautiful; and they took wives for themselves of all whom they chose. And the Lord said, “My Spirit shall not strive with man forever, for he is indeed flesh; yet his days shall be one hundred and twenty years.” There were giants on the earth in those days, and also afterward, when the sons of God came in to the daughters of men and they bore children to them. Those were the mighty men who were of old, men of renown. —Genesis 6:1-4

This discussion is a continuation of the one I started last time, so I recommend that you, dear reader, read the first part before this one, if you please.

3) Humans as an Artificially Bred or Engineered Species.

With regard to this one I have two main points to make. First there is Occam’s Razor again, and the idea that if a simple and natural explanation can account for the evidence, then it is probably good enough. And I have seen no convincing evidence that we humans could not have evolved on this planet naturally, in accordance with more or less Darwinian theories of evolution, such as natural selection and sexual selection. It is true that we evolved rather quickly, especially within the last hundred thousand years or so, but nevertheless our violent, warlike nature, and our relatively very high intelligence modifying our behavior, and also our increasingly artificial environment, could fairly easily account for an acceleration of survival of the fittest in our species and development in seemingly strange ways. So falling back on us being genetically engineered by aliens by a logical process of elimination doesn’t work, at least not for me.

The other main point is that we are extremely unlikely to be some kind of hybrid with alien DNA in us. People who are able to assume this are simply unable to grasp the extreme complexity of our biochemical processes and how they arose and evolved largely through random mutations. The odds of another species on some other world, independently of us, evolving to have the same genetic code and the same chemical reactions governing their metabolic processes—entirely setting aside the bodily form of an advanced ape—are astronomically minuscule. Even if the Panspermia hypothesis is correct and the origins of life are extraterrestrial and common over many worlds, still the odds of a primitive bacterium on earth and the same type of primitive bacterium on some other planet evolving up into beings that can cross breed is simply bad science fiction. So there is still the possibility that aliens came down and, for reasons of their own, selectively bred us from cruder hominids, or messed with our DNA and genetically engineered a new and improved human (and for all we know some of these same bred or engineered humans could have been transplanted to other worlds and employed as agents or whatever); but the idea that we could combine our DNA with alien beings without radical molecular engineering is more unlikely than that we could combine our DNA with a beetle and produce some kind of viable human/beetle hybrid. People who don’t understand genetics and statistics may not appreciate this, but the very notion seems wildly fantastical to me.

So maybe, just maybe, intelligent beings from some other world may have conditioned our arising through some method other than mating with us, but going with William of Ockham I would be inclined to see such a notion as unnecessary and, at present at least, unsubstantiated.

Deviating from science a bit here, I would like to offer a Buddhistic (and maybe Hinduistic) hypothesis for why our species’ evolution has taken such punctuated leaps over the past few million years, and especially over the past ten thousand or so. It could be that some beings in this universe are humanlike enough that, after their own world is somehow destroyed or their population decreases drastically for some reason, large numbers of them are reborn (“reincarnated”) as human beings, causing a sudden shift in the basic characteristics of the species, on average, due to a sudden shift in karmic momentum. It’s just an idea, but even that may be cutting against Occam’s Razor, and obviously cuts against Scientism, since many evolutionists have adopted the idea of punctuated equilibrium, or sudden spurts in evolution followed by long periods of relative stability. Sudden radical changes along the way of our evolution do not necessarily indicate external meddling in the process, because the process itself appears to work that way anyhow.

Since I have included a kind of mule-headed spoiler for the other two topics in the previous installment, I may as well add one here, just a little one: On a recent video I watched discussing the genetic engineering of early humans, there was mention of a D-allele which suddenly appears in the human genome some tens of thousands of years ago (I don’t remember exactly how many). The narrator used this sudden appearance of the D-allele, which evidently was not derived from cross breeding with Neanderthals or Denisovans or anyone else, as evidence for the injection of this genetic material into us from some non-terrestrial source. On the other hand he does mention that the origin of this allele is somewhere in the neighborhood of Mongolia, and that it spread from there. So I would just observe that this is exactly how Darwinian natural selection is supposed to occur: a new gene or allele arises through random mutation, in this case evidently around Mongolia, and if it is beneficial it spreads.

And so regardless of whether or not some kind of alien beings are coming here, I see no persuasive evidence whatsoever that we are an artificially produced species, unless the artificiality is our own doing, like modifying our evolutionary course through warfare, agriculture, urban dwelling, and human sexual proclivities, like males liking protruding breasts or a sweet voice in females or females liking humor and/or artistic originality in males. We may seem too artificial and messed up and dysfunctional to be here naturally, but obviously despite our shortcomings we have been phenomenally successful as a species, and again, Darwinian evolution is a process of jerry-rigging, and though messed up and all the rest, we have done well enough thus far to propagate our species.

However, there is still one factor that allows for ALL of the theories I have just rejected, and which may be a sufficient argument in favor of prehistoric technologically advanced civilizations, aliens visiting us from outer space, and humans being an artificial product of alien breeding programs—along with ghosts, gods, devils, the Loch Ness Monster, Bigfoot, leprechauns, unicorns, the Garden of Eden, Valhalla, Hitler being a saint, all races being equally intelligent, the world being a computer simulation, and just about every other theory that may seem outlandish to a “normal” human. That one factor is my theory of everything (TOE), also known as the Simile of the Block of Marble. I have written about it elsewhere so I won’t elaborate here, but essentially the point is that the Universe is absolutely infinite, and in an absolutely infinite Universe, anything that can happen does and must happen. Furthermore, all these various realities are interconnected in an infinitude of ways. Thus there are an infinite number of pasts, presents, and futures, all interrelated, even though we, in our perceptual limitations, are unaware of them; and there is not just one correct interpretation of empirical reality.

David Hume pointed out long ago that anything that can be imagined is possible, at least in a metaphysical sense; and I would add that much that cannot be imagined is also possible (like a six-dimensional hyper-hyper-hypercube). And obviously, space aliens breeding us is imaginable, the lost continent of Atlantis is imaginable, demons and angels are imaginable, and so on. Therefore most of us may be locked into a specific version of empirical reality that does not include greys or leprechauns, but that does not necessarily exclude these prodigies from the worlds of others who perceive things differently.

So, because of my perceptual limitations I am able to settle on just one main interpretation of the world around me; and because scientific empiricism is such a powerful means of making sense of so much of the world (though not all of it), I tend to go with that, even though I maintain that science is in no position to make metaphysical claims (so I accept scientific method but not scientific realism). And going with a more or less scientific perspective, it seems most likely to me that there may have been a great prehistoric civilization that was wiped clean by glacial ice sheets, but that Atlantis was in all likelihood just the island of Crete; that alien beings might be coming here and observing us (and I would even guess that some probably are), but that human-looking ones are extremely unlikely to have evolved independently of us, especially if they are biochemically similar, and that they are more likely to come through some dimension that science is too primitive as yet to understand; and that the idea of people being bred by extraterrestrial non-humans tens or hundreds of thousands of years ago may have happened, but that such a theory is totally unnecessary to account for us being here, or just seeming to be here, because reality is NOT as it seems. 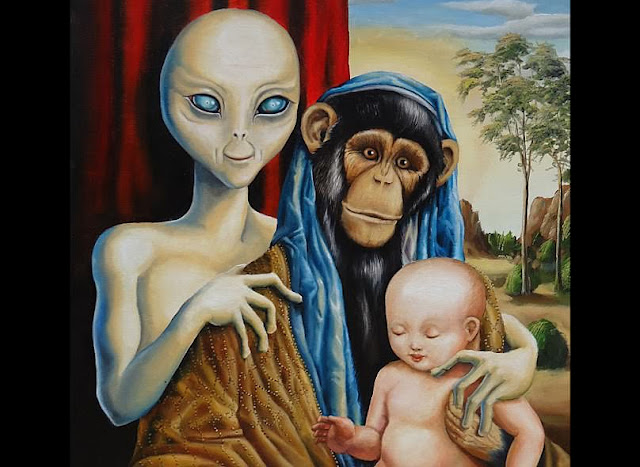