On the Leftist Rejection of Reality

As a rule we disbelieve all facts and theories for which we have no use.  —William James

…the essence of normality is the refusal of reality.  —Ernest Becker

I have written a number of posts attempting to explain a peculiar characteristic of the political and cultural left in general, namely that leftists, especially educated, more or less intellectual ones, prefer their theoretical ideology to empirical reality. I wrote one essay in particular attempting to explain why even very intelligent intellectuals in elite universities STILL consider Marxism to be a good idea. This preference of fashionable ideas to actual empirical reality is one of the main reasons why lefties can endorse socialism or even flat-out Marxism after more than a century of failed or stagnant economies, authoritarianism and the crushing of human rights, and even, in many cases, state-enforced genocide.

This is a matter of the left, especially the indoctrinated “hard left,” rejecting conventional reality out of hand, in some cases for no better reason than that reality is so politically incorrect and icky to their tastes that they simply cannot bear it. Some examples of unbearable truths are: black violence (black on white, black on black, and black on police); the reasons for disproportionate rates of arrests and imprisonment of black people; the reasons for their disproportionately weak academic performance; physical and psychological differences not only between ethnicities but also between men and women; the spurious nature of most environmental fear mongering; the truth about the nature and origins of the Wuhan coronavirus, including the importance of natural immunity; etc., etc. Lately such unpalatable facts have inspired some leftist academics to reject empiricism and objectivity out of hand as tools of white patriarchal oppression. And I may as well point out the obvious here: rejection of reality is essentially delusion, and also foolishness.

Preferring an ideology based on emotional wishful political thinking is not the only way in which the left, generally speaking, rejects reality and thus wallows in foolishness and delusion. Another way reflects the “progressive” tendency, almost by definition, of rejecting the way things are in favor of some utopian ideal positioned sometime in a possible future. (This really is a fundamental difference between liberals on one hand and conservatives on the other: conservative types accept the way things are and wish to conserve them, whereas liberals want things to be different, possibly after tearing down the way things are in order to pave the way.) One can ask a “progressive” (as though degeneracy were progress), “Do you love your country?” and I’m sure a great many of them would deflect from the fact that they do not by saying they love what their country could become, if only the progressives were able to implement sufficient social and economic reforms, etc.; but a possible ideal future is not REAL even in a conventional sense, and if you were to press such a person, back them against the wall, and pointedly ask them if they love their country as it is now, if they were honest they would very likely have to say “no.” They do not love their country or the way the world is now, they love the narratives of their theoretical ideology, and merely an imaginary country that never existed, and probably never will exist. Again, this is a rejection of the way things are, which is foolishness and delusion.

From a philosophical or spiritual point of view, finding the present moment to be unacceptable is essentially a case of self-inflicted suffering. One could argue that such an attitude can be very useful in spirituality, in Dharma; for example finding Samsara and the phenomenal world to be unacceptable inspires dedicated individuals to seek ultimate truth and liberation…but the feelings-driven ideals of leftism are NOT a case of rejecting Samsara for the Ultimate. Rather, they are a matter of rejecting one version of Samsara that, though messy, clearly works and is relatively stable, for another version of Samsara that is untested—or else HAS been tested and DIDN’T WORK, leading to the aforementioned failed economies, authoritarianism, and/or genocide.

Wiser liberals, like classical ones, adopt a more positive attitude, wanting to improve things without actually hating the way things already are; though this sort of liberalism is rapidly going out of fashion on the left (becoming identified more and more with the right), and it is being replaced by mass hysteria and blaming evil Whitey (instead of the previous Marxist bogeymen of the bourgeoisie) for all of the suffering in the world, or most of it anyway.

The truth, even the Noble Truth, is that all suffering—all of it—is ultimately self-inflicted and springs from unwisdom, and it includes an attitude of insisting on things being different from what they are. (Left-wing western Buddhists increasingly reject the Second Noble Truth for the very reason that it stands in the way of their policy of blaming Whitey for human suffering instead of their own unwholesome attitudes. They increasingly reject wisdom in general for the same reason.) Postmodern lefties just hate the present, and the past, and will probably hate the future as well. To accept the present moment, according to the new leftist mindset, is to endorse racism, colonialism, inequity, oppression, white people and their alleged “privilege,” homo- and transphobia, sexism, rampant microaggressions, and injustice and badness in general.

But accepting the way things are, and accepting the present moment, are fundamental to the nature of wisdom. As Ram Dass used to say, Be Here Now. This doesn’t mean that we shouldn’t fix what is broken, or that we shouldn’t simply improve a messy situation, but it does mean that we do not struggle against reality (because reality always wins), but we make a situation better while all the time being in harmony with the flow of things—we can improve a situation without one iota of friction or hatred or resentment or rage, or even righteous indignation. We should improve a situation out of love for our fellow beings, all of them, not out of hatred and a desire to smash the Patriarchy.

Finally, though it is true that normies in general have little to do with ultimate truth or the Absolute (unless they reify it in some more or less childish manner), it appears to be true that another way in which the left rejects Reality is its rather Marxist insistence on atheistic materialism—which of course rejects any higher truth than fake economics and ideas about justice. Religion and genuine spirituality are much more likely to be encountered on the right, among the “fascists” and “toothless rubes” and “white supremacists” and “patriarchal oppressors.” Leftist attempts at religion, especially lately, merely subvert spirituality and replace it with leftist political correctness hysteria, mixed with raw feminine sentiment. 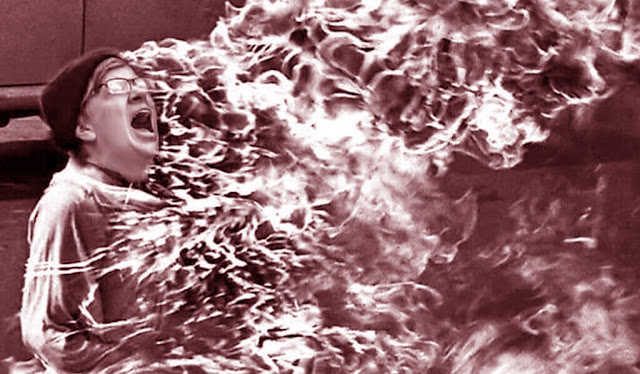