The Unfortunate Merits of Ruthless Violence

Timid men prefer the calm of despotism to the tempestuous sea of liberty. —Thomas Jefferson

Every citizen should be a soldier. This was the case with the Greeks and Romans, and must be that of every free state. —Jefferson again

Anyone familiar with history will know that, as a rule, any civilized society that is opposed to violence, or just afraid of it, inevitably gets itself conquered by less sophisticated invaders (or just a less “civilized” minority within the culture) who are NOT opposed to violence. Our cultural forefathers in the western Roman Empire became so effete in their civilization that they were finished off by Huns and Germanic tribes. The eastern Roman Empire (the “Byzantines”) were so sophisticated that they were successfully invaded by the Persians, Arabs, Bulgarians, and Turks mostly. The peace-loving Chinese were conquered repeatedly by violent pastoral barbarians like the Mongols and the Jurchens of Manchuria. Buddhist India was slaughtered and destroyed by raging Muslim invaders. Even in the 20th century the highly sophisticated French, for example, were steamrolled easily by the Germans, who appeared really to enjoy steamrolling civilized weaklings. I could easily continue with this name-dropping, but I suppose you get the idea. Not only are the final winners ruthless in their violence, but they often enjoy it. Some barbarian religions even claim that a man who dies in battle is guaranteed of heaven, and a few have limited heaven only to fallen heroes.

Really, what can stand up to enthusiastic ruthless violence? A decadent civilization can prolong its existence, and stave off its inevitable demise, through money and technological superiority; but gold, fortifications, Greek fire, or hypersonic missiles are of limited value when the population lives in fear and half of them will be opposed to spilling one drop of blood even to defend themselves. When a civilization gets really degenerate, as late Rome was and as ours evidently is now, a significant proportion of the population (the Christians then and the “progressives” now) are opposed to their own culture and want it to be destroyed. An excerpt from a poem composed by my father presents the situation fairly well:

Your destiny is written in the books upon your shelf,

For History invariably returns unto itself,

And all the seers and the sages

Who survived throughout the ages

Have decreed that you will castrate yourself.

History is full of gutless bleeding hearts like you

Who destroyed themselves for lack of gut and thew;

And the heroes of the past

Will have their laugh at last,

For they know that you are finished—you are through.

The Romans lasted near a thousand years,

An Empire carved with axes, swords, and spears;

The world trembled at their feet

And saw their harvests reaped,

Their cities raped and plundered, through their tears.

But they grew rich and spoiled and lazy just like you,

And the men who survive this combo are too few;

All the jewels on their sandals

Let your wife make your decisions;

But your children, who are sleeping in their beds

Will be softer yet than you are,

And that's taking things too far:

Oh, you've really put a curse upon their heads!

Does your daughter, when she trembles in her sleep,

Of men who know a craving and a thirst

For loot of war—and know they'll take her first?

You're as weak as milk, and soft as currant jelly,

So beware the Vandal with the empty belly:

He will never leap the net to shake your hand;

He will never try to make you understand;

He will kick you in the nuts,

Grease his tank treads with your guts—

At least you'll do to fertilize his land.

So this is the situation. Strong men make good times, at least for their own people, good times make weak men, weak men make bad times, and bad times make strong men. This is the cycle of history, and we have apparently arrived at the weak men making bad times stage. If we are fortunate, the strong men made by the bad times will be some of our own and will rejuvenate the civilization, as happened to some extent to the “Greatest Generation” during the Great Depression. If we are not so fortunate, the strong men will be foreigners who invade (or immigrate in huge numbers) and essentially end a great experiment in Western Civilization.

It is a dilemma. Pacifism and non-harming are certainly morally superior in and of themselves, though weaklings and cowards may use pacifism and non-harming as justifications for their own weakness and cowardice. Also a vehemently non-aggressive culture tends to breed plenty of weaklings and cowards who have never had to face true adversity. So the downside of uncompromising nonviolence is that a population endorsing it becomes sheep for the first horde of wolfish barbarians to come along.

So what is the solution to this problem of ruthless violence ultimately trumping nonviolence? It seems to me that all we have to do is to look back on historical solutions to the problem. The Greeks are considered the fathers or founders of Western Civilization as we know it; and in addition to democracy, a phonetic alphabet with vowels, the beginnings of advanced mathematics and science, and a few other important innovations, they also were the first to turn warfare into a science—they utterly excelled at ass-kicking. The Romans also were instrumental in establishing classical Western Civilization throughout most of the western world at the time, and established such important elements as government by laws instead of by dictatorial decree (which broke down quite a lot after the first Caesar), a relatively accurate calendar, and some miracles of civic engineering—but they too were tough-ass fighters during their rise and at the height of their glory. And after the Romans started getting rich and spoiled and lazy in Rome and the other big cities, there were for centuries enough semi-civilized tough men on the frontiers to keep the legions strong. Nowadays we still have some very tough special forces guys in our military, though feminism, gay pride, trans rights, public relations, and handing out food packets seems to be more important than killing enemies in the politically correct and degenerate American military. Even elite groups like the Navy SEALs are being weakened lately through emphasis on diversity and inclusion over actual individual merit. Our most effective forces now are probably weaklings sitting in computer rooms launching missiles and making cyber-attacks. But even they won't stand up to an army of militants who simply refuse to give up.

What I am getting at here in a roundabout way is that the only way to face ruthless barbarian violence is with ruthless civilized violence. This implies that men with principles and honor, not just a love of fighting and killing or greed for rape and pillage, are our best bet against Huns or Communists, just as well-trained and principled police officers are traditionally our best bet against criminals. Men who do not necessarily like to fight, but fight to defend their country, their culture, their family, their ideals, and their way of life, prove to be superior fighters to undisciplined hordes. What is best cultivated from a Darwinian point of view of survival of the fittest is a love of peace but a martial ethic and a preparedness to fight and die for the sake of honor and duty.

We had this at one time, before the civilization was essentially castrated by feminists, communists, and a diversity of moral degenerates spoiled and pampered by the good times made by strong men of the past. We have two choices really: remain a society of decadent castrated sheep and wind up ruled by ruthless barbarians, or else become strong and ruthless, yet self-restrained and principled fighters of the enemies of freedom and self-governance. As Jordan Peterson has said at least once, “You should be able to be a monster, and then not be one.” Or be one only to the barbarians who threaten to destroy your civilization’s rights and freedoms.

As a Buddhist I apologize for endorsing violence like this, even in self-defense, but saintly virtue is a luxury afforded only by saintly renunciants. As Thomas Jefferson (founding father of  independent America or racist and sexist slave owner, depending on your view) wrote, in the secular world the tree of liberty must be refreshed from time to time with the blood of patriots and tyrants. In a free society you must be strong, self-disciplined, and ruthlessly violent, if necessary, to protect your own. 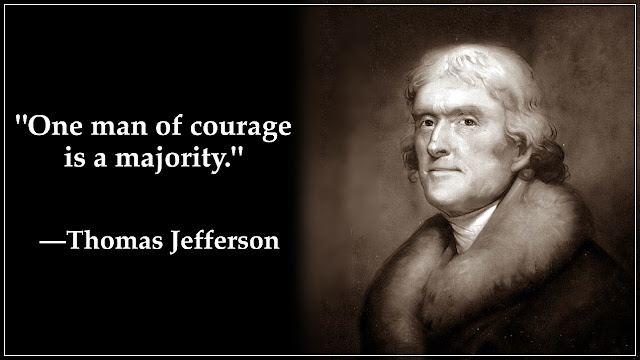