What we got here, is a failure to communicate. —from Cool Hand Luke

Political correctness, as a hysterical symptom of the new left, has become such that a rather long list of words in the English language is now taboo, practically obscene, or nowadays worse than obscene, the utterance of which can land one in a mess of trouble, can even result in social or professional suicide—not only words like nigger, towelhead, beaner, tranny, bull dyke, retard, etc., but to some degree even words like colored, oriental, midget, mankind, and maybe even stewardess or husband. The use of even these latter words are now considered by many, especially on the hypersensitive left, to be offensive.

This attitude includes, but is not at all limited to, the imbecilic concept of microaggressions, according to which a person may be “offensive” and guilty of “aggression” even when conscientiously trying to be polite. I intend to discuss the bilateral ethics of communication, in which the hearer bears as much moral responsibility as as the speaker, some other time; but here I will point out that whether a person is guilty of aggression or not depends entirely on that person’s own volition, not upon whether the hearer of that person feels, or chooses to be, offended. Even worldly legal codes acknowledge the importance of volition in determining guilt or innocence. People who feel “victimized” by microaggressions are emotionally dysfunctional, and would do well to cultivate some maturity, if at all possible. (To feel victimized by microaggressions is SO gay.)

Anyway, despite this hysterical hypersensitivity over mere words, the new left has nevertheless stepped up the derogatory epithets of name-calling by an order of magnitude (at least!) with terms like racist, sexist, misogynist, homophobe, transphobe, xenophobe, Islamophobe, fascist, Nazi, Hitler, white supremacist, and so on. Social Justice activists fling these terms around like confetti at a parade—or, if that analogy is outdated, like rocks and piss bottles at an anti free speech demonstration.

In addition to the obvious muddle-headed hypocrisy on this score, it is clear that this trend involves essentially the same hysteria that a few hundred years ago had people hurling epithets like atheist, heretic, and witch—often with the same rage-distorted facial expressions, the same loud shrillness of voice, the same spittle flying from the mouth, the same subconscious fear and insecurity, and the same more or less conscious hatred. The purpose of it also is fundamentally the same: the name-calling is used as a weapon, first, to cause shame and distress in another person, at best shaming them into abandoning their old ways and beliefs, or at least intimidating them into not expressing them, and at worst just vindictively causing pain.

Second, at a more subtle level, the purpose of such slurs and condemnations is to dehumanize those viewed as outsiders, in order to justify despising them, and to encourage others to despise them also. Thus hostile name-calling, politically correct and otherwise, is essentially a vehicle of hatred, regardless of the NO HATE slogans on signs wielded by howling mobs, or painted on antifa shields used as weapons. (It is also regardless of the fact that I indulge in some name-calling myself sometimes, especially toward feminazi SJW snowflakes.)

The name-callers are apparently going with the assumption that most people are weak-minded enough to be shamed by these names…which may have really been the case not long ago, but it is starting to have the opposite effect now, as the knee-jerk negative reaction to these expletives begins to wear off through their rampant overuse. Instead of the boy who cried wolf, now it’s the hysterical college student who cries fascist. Rather than being shamed and intimidated, people are more and more being insulted and thoroughly fed up with the hatred, vindictiveness, intolerance, and hysteria of the name-callers (who in some cases are mainstream journalists, university administrators, or liberal politicians). 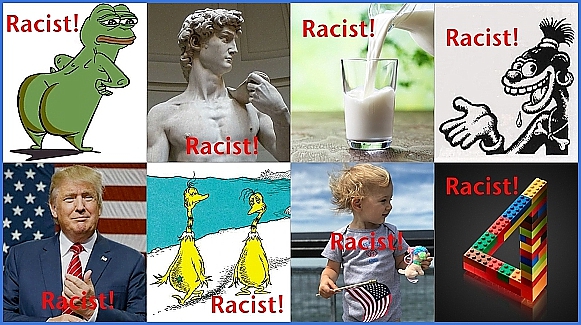 Derogatory words are sometimes reclaimed and rehabilitated. Homosexuals have reclaimed queer, for example, so that it is no longer considered to be necessarily offensive, and they apply it to themselves; even fag seems to be edging toward polite conversation. Also, sexually shameless, wanton females have lately begun openly referring to themselves as sluts, apparently taking pride in their sluttiness, which is quite mainstream now. And of course black people have long called each other nigger, sometimes even as an endearment. So, why not do the same with these derogatory terms flung by intolerant leftists?

Seriously, if anyone who accepts the scientific evidence for racial differences is a racist, then it makes perfect sense to be a racist. If anyone who accepts the scientific evidence on gender differences is a sexist and transphobe, then it makes perfect sense to be sexist and transphobic. If accepting unsavory facts about the prophet Muhammad, the ideal role model for Muslims, which facts traditional Muslims freely accept themselves—for instance, that he led a band of thieves who made murderous pirate raids on caravans to supplement their income, ordered the deaths of hundreds of people, many of them by beheading, sold women and children into slavery, had sexual intercourse with an eleven-year-old girl, etc.—if accepting all this makes one an Islamophobe, then by golly let’s all be Islamophobes. And if anyone to the political right of Karl Marx is a fascist, then only a misguided fool or ignoramus would not be one.

(At this point I’d like to make a brief digression by pointing out a peculiar and remarkable phenomenon. The history of the 20th century has shown, if only by numbers of corpses, that communism has been worse than fascism as a political and economic system in this world. These two extremes are like the ends of a horseshoe, and come very close to each other in many ways, and both are pretty obviously more bad than good. Yet nowadays communist bears almost no negative connotations in public discourse, with endorsement of it even being seen as laudable, and certainly unworthy of being banned from platforms like Twitter and Facebook, whereas fascism is practically a swearword, and endorsing it practically a crime to be stamped out by any means. Stalin was probably at least as bad as Hitler, killing a hell of a lot more people than Hitler did (if only because he was in power longer), yet people on the left don’t declare anyone of whom they disapprove to be “literally Joseph Stalin.” Not to mention the likes of Mao, Castro, Pol Pot, Robert Mugabe, and the current obese, maniacal despot of North Korea. It just goes to show that the political left has had control of the official narrative long enough to see to such things.)

If only because they can be applied without hesitation to just about any sane, reasonable person nowadays, derogatory political and social slurs like fascist and sexist should be accepted with equanimity, even embraced and transformed into words of praise. Hell, they’re practically a badge of honor. As the Proverb of Hell says, “Listen to the fool’s reproach; it is a kingly title”—or in other words, the next best thing to the praise of a wise person is the censure of a fool. If you’ve got indoctrinated zombies shrieking in rage at you, then you must be doing something right. Keep up the good work.

Bearing this in mind, considering what an enlightened act the reclamation of slurs can be, I think it would be lovely to see Student Sexist Associations springing up on campuses throughout academia, along with new chapters of the Young Fascist Xenophobes of America, Racist Lives Matter, the Islamophobic Brotherhood, Transphobic Nation, Misogynist White Supremacists for a Better World, and on and on. If homosexuals can embrace the term queer, and profligate women the word slut, then we can all do likewise. Wear your slur on your sleeve.

So there you are. To recapitulate: If you’re going to be called a racist, fascist, or whatever whether you really are one or not, then you may as well bring the naughty word into the mainstream and thereby domesticate it: “Yeah, we’re all fascists because we believe in liberty, stand up for the National Anthem, and don’t hate police officers.” If that’s what a fascist is, then hell yeah I’m a fascist, and fascism is good—Deal with it. (This, incidentally, is one of the reasons why I am ostentatiously flaunting some ostensible racism, fascism, etc. on this blog. Consider it a kind of public service.) And if hysterical leftists don’t like our acceptance of the new badges of honor, our refusal to be shamed and cowed by them, well that’s just too freaking bad for them. Maybe at least they’ll come up with new and interesting names to throw, that haven’t been worn out yet, like the wiseguys on the alt right do.