The Weak Against the Strong in Birds and Humans

Of all the religions ever devised by the great practical jokers of the race, this [i.e., Christianity] is the one that offers most for the least money, so to speak, to the inferior man. It starts out by denying his inferiority in plain terms: all men are equal in the sight of God. It ends by erecting that inferiority into a sort of actual superiority: it is a merit to be stupid, and miserable, and sorely put upon—of such are the celestial elect. Not all the eloquence of a million Nietzsches, nor all the painful marshalling of evidence of a million Darwins and Harnacks, will ever empty that great consolation of its allure. The most they can ever accomplish is to make the superior orders of men acutely conscious of the exact nature of it, and so give them armament against the contagion. This is going on; this is being done. —H. L. Mencken (with regard to Christianity, although so-called Progressivism has lately taken the ball and is running with it)

Are there any ornithologists who read this blog? No? Well, this particular post begins with some ornithology. Maybe those of you who watch birds a lot may have noticed this also. Anyway, it often happens that if some small bird, like a finch or blackbird or starling, sees a potentially dangerous bird of prey—a hawk, owl, or whatever—perched in a tree in the vicinity, it will begin making an alarm call that will call other birds of the same sort (the little ones) into the area, at which point they will mob the bird of prey, swooping and screeching at it until it finally is harassed to the point that it goes away. For one finch to attack a hawk could be suicidal; but a whole flock of them simultaneously attacking the hawk overwhelms it, and although it’s not really in danger, it moves elsewhere just to get some peace and quiet.

This strategy of the weak ganging up on the strong is common not only to tweety birds, but to humans also. Throughout history peasants’ rebellions, people’s revolutions, and progressive movements have tended to be cases of the poor and weak ganging up on the rich and strong. The various uprisings of the plebs in Republican Rome, the Christian revolution in later Imperial Rome, the French Revolution, various anti-colonialist movements in the mid-20th century, and many more examples could be given of human finches and blackbirds ganging up and mobbing a group of elitist owls or falcons.

These cases of mobbing the strong and aggressive are often successful, mainly because, as is the case with the tweety birds, the weak far outnumber the strong in this world. The French Revolution, for example, was a case of millions of downtrodden peasants and urban workers rising against a relatively small number of aristocrats; the (first) Russian Revolution also was a case of masses within a population rebelling against a much smaller number of nobles and officials, especially at first. When the strong few become sufficiently oppressive and unpopular, they may suddenly be overwhelmed by a tsunami of enraged rabble, possibly armed only with sticks, rocks, slogans, and general public opinion.

I mention this because we are in the midst of a similar case at present, of course, yet another of the perennial risings of the so-called lower orders. This time it’s not peasants against lords, or workers against industrialist plutocrats, or even necessarily oppressed against oppressors—this time it’s somewhat similar to early Christianity against pagan Rome; a kind of moral (or at least self-righteous) attempt to overthrow an unacceptably “uncompassionate” system, glorifying weakness and dysfunction and demonizing power, although without the courage and fairly genuine moral high ground enjoyed by the early Christians. And this time, possibly for the first time in history, it’s pretty much anyone inclined to resent white males, including white males themselves, against white males.

There is a strange peculiarity of this mobbing of the strong, which strikes me as rather amazing: in this case the strong being mobbed are almost as numerous as the weak! With early Christianity, say around the 4th century, the situation was similar; and in that case the only way they were able to win was through their greater respectability and resolve, and the decadence of the system they were attacking. In our case, the decadence and cultivated effeminacy of white males, especially in Western Europe, is similar to the earlier example, although I fail to see the left standing on any moral ground higher than that occupied by their adversaries, and any respectability they enjoy is largely manufactured by control of the narrative, and hype.

But in America, at least, the demonized enemies still have some backbone, some actual strength, and are starting to fight back. Furthermore, they have as powerful allies the women who love them, or who simply agree with them that the political left has gone insane, along with a growing number of non-whites who may not love white men, but are repelled by the mass hysteria and can see that the system being attacked is actually superior, and preferable, to the Brave New World threatening to replace it. And the new left, raising as its banner the glorification of dysfunction, weakness, irrationality, victimization, and, essentially, inferiority, needs the odds stacked in their favor as much as possible—in a fair fight they are doomed to be utterly destroyed.

Consider the situation for a moment. The demonized white men designated as the arch-villains of the world, through cleverness, rationality, innovation, industry, and the development of ass-kicking into a science, have created the modern world. If women or black Africans had been running the show we’d still be living in mud huts—don’t kid yourself on that point. The white men who created western civilization, which has become world civilization, could easily kick the collective ass of this rabble of spoiled elitists and misfits if they chose to do so, with nothing the self-proclaimed “victims” could do to stop them. That is, if feminist conditioning and propaganda (plus the anti white male bias of Google’s search engine!) haven’t simply turned white males into cringing weaklings who dare not even emit a hawk-like scream of defiance. In western Europe especially the creators of civilization seem to have degenerated into docile, easily slaughtered sheep; however, idiotic feminists may be begging them to become men again when Europe is in flames, as a result of non-white men taking over. Although by then it may be much too late.

But in America at least, and I hope elsewhere also, it appears that by picking white men as the predator/enemy to be attacked, the finches have bitten off rather more than they can chew (ha, horrible mixed metaphor, as of course finches have no teeth). If the hawks start fighting back in earnest the finches are fucked. With twenty finches against one hawk, the hysterical little tweeties are likely to be victorious; but with twenty finches against fifteen hawks, or even ten, what we’re bound to wind up with is a lot of dead and maimed finches. And they’ll get exactly what they deserve.

(A brief note: I’m not necessarily encouraging physical violence here. Even in a reasoned debate the finches are fucked.) 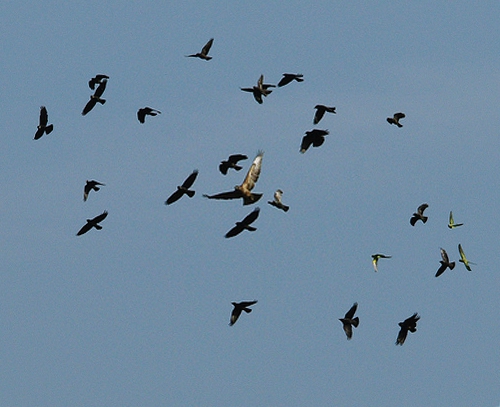