On the Validity of Stereotypes (part 1 of 2)


Out with stereotypes, feminism proclaims. But stereotypes are the west's stunning sexual personae, the vehicles of art's assault against nature. The moment there is imagination, there is myth. —Camille Paglia

I bet you anything that 10 times out of 10, Nicky, Vinny and Tony will beat the shit out of Todd, Kyle and Tucker.  —George Carlin

Recently I came across a discussion of an academic study published not long ago, which found that police officers, including black ones, are statistically less likely to behave respectfully toward young black men than toward anyone else. They are more wary, less friendly, and less likely to offer assistance to them than to, say, young white men or little old ladies. A week or so after reading about this I decided to write about it…but now I can’t find the reference. I had already deleted it, and searching through my email trash file came up fruitless. I did, however, find another study, this one from Harvard, demonstrating that police officers, including black ones, are statistically much more likely to manhandle or “rough up” a black man than a white or Hispanic one, even if the person is cooperating and not suspected of any particular crime—although they’re less likely to actually shoot a black person. A white criminal suspect is more in danger of being shot by police than a black one.

One explanation given for this latter phenomenon, and one that I think is probably right, is that police nowadays are influenced by a variant of the Fergusen Effect: they’re more afraid of shooting a black man because they feel that their career and social standing could easily be destroyed as a result of negative publicity from the left-leaning mainstream media, and of left-leaning public opinion, regardless of how justified they would be in shooting him. For a black policeman to shoot and kill an unarmed white woman in her pajamas is more of an embarrassment to the left than anything else, something to be covered up, playing hob with their preferred narrative; but for a white policeman to shoot and kill a black criminal resisting arrest, with a criminal record a yard long besides, is seen as yet another stereotypical example of murderous police racism. Even black cops are racist against black people, supposedly.

With regard to the first part, concerning greater police bias against black men short of actually shooting them, the standard explanation is, of course, racism. I find it rather hard to believe that even black police officers are racists against their own race, as is sometimes alleged. (However, I must admit that many indoctrinated white leftists are racist against their own race, even to the point of advocating white ethnic suicide—but most black people seem to lean leftwards, and so it’s unlikely that they’re racist against themselves.) What strikes me as much more likely is that police are biased against young black men because of past experience.

Experience has shown veteran law enforcement officers that a young black man is a hell of a lot more likely to pull a gun on them, or otherwise cause trouble, than is a white man or a little old lady. Criminal statistics published by the US government are grim evidence of this. Figures published by the Department of Justice and the FBI show that, for example, approximately 6% of the US population (i.e., black males) commit more than half of the murders, and almost half of all violent crimes. Amazingly, in the city of New York, according to data provided by the NYPD, black men are more than 98 times more likely to shoot somebody than are white men—that’s not 98% greater likelihood, mind you, but almost ten thousand percent. By age 23, half of black males have been arrested, and more than half of black men have a criminal record—and that’s not just for speeding tickets. If black men were removed from the equation in America, the rate of gun-oriented crimes in the US would be comparable to that in the UK (indicating that America doesn’t so much have a gun problem as a black crime problem, although recent mass shootings may alter the statistics somewhat). I actually came upon the information, in Wikipedia no less, that at present approximately 4.7% of all black men in America are presently in jail or prison, as compared with 0.7% of all white men. With regard to interracial violence, FBI statistics show that a black person is 27 times more likely to assault a white person than vice versa. Also, blacks, constituting 13% of the US population, are responsible for more than 40% of police killings, which means that a black man is more than 4 times more likely to murder a police officer than is a man who is not black. Studies show that these statistics are not biased by a higher percentage of blacks being arrested due to bias: collected testimonies of victims and witnesses indicate that arrests are fairly representative across races for most forms of offense. (One exception is possession of illegal drugs: black men are more likely to be arrested for other crimes, and then searched, resulting in more criminal charges for possession than for whites or Hispanics.) Police officers have direct personal experience of the reality represented by these figures. They may be required to be politically correct, but they’re not completely stupid. 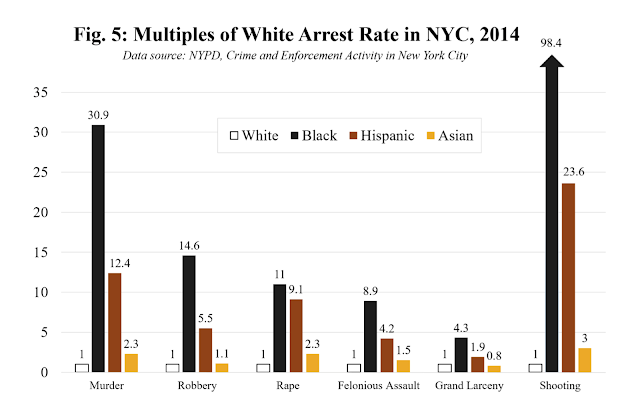 Before I became a monk I acquired an old US Army training manual on urban warfare, mainly just out of curiosity; and I remember the instruction that, when crossing a street, one should run straight across, not diagonally or in a zigzag, as it decreases the statistical odds of being shot. (Another good one: before entering a potentially dangerous building or room, first shoot off the lock with short bursts of automatic weapons fire; then kick the door open, immediately toss in a grenade, and take cover; then, as soon as the grenade detonates, rush into the room with short bursts of automatic weapons fire. Remember that the next time you have a tense board meeting to attend.) Anyway, police exercising greater caution and more of an “on edge” approach toward black suspected criminals or unknowns is an exercise of the very same sort of reasoning: it decreases the statistical odds of getting shot, or of taking a beating. It should not be too difficult to realize that law enforcement officers, who commonly deal with violent criminals and are occasionally in real danger to their lives, will prefer what ensures their safety to what happens to be politically correct. For a police officer, especially in an urban environment, being politically correct can be suicidal. The racist stereotype of young urban black men being criminals unfortunately has some real validity. For that matter, stereotypes in general have some real validity. That’s how they became stereotypes in the first place.

This can be unfortunate for those who don’t fit the negative stereotype applied to their group. The young, bearded, turbaned Middle Eastern man walking through an airport will receive more suspicious stares than the four-foot-nothing middle-aged Chinese woman with polyester hair walking nearby. That’s too bad for him. Maybe he’s really a nice guy. Nevertheless, it can hardly be called “unfair” to take precautions based on realistic odds. It makes a hell of a lot more sense to search his luggage for weapons or explosives than the Chinese lady’s. Statistics would clearly bear this out. It is hardly “unfair” if you keep your children away from a Rottweiler who happens, unbeknownst to you, to be friendly. Besides, life will never be entirely “fair,” regardless of all the feminine emotionality and leftist hysteria in the world.

(As an aside, it is true that Buddhist philosophy teaches that the world is “fair” in the sense that we all get what we deserve, in accordance with our karma—but that could be used to justify any atrocity; the person at the receiving end of the atrocity may be paying a karmic debt, possibly from some past existence, but the perpetrator is creating new bad karma of his own in this life regardless.)

A similar and rather obvious example of the PC left ignoring empirical reality and practicality in favor of hysterical PC idealism is former president Obama’s foolish insistence that transsexuals should be recruited into the US armed forces. Even setting aside the possibility, or probability, of transsexuals being wimpy girlyboys who can’t fight worth a damn, the fact remains that transgender people show a very much higher incidence of clinical depression, mental illness, and suicide—plus of course the increased likelihood of sex change operations having to be paid for by the US military and the American taxpayer. But, of course, we all must ignore heteronormative stereotypes of transsexuals being weak and dysfunctional, regardless of how many of them really are that way. The thing is, though, that the purpose of the military is to fight, or to be so tough and scary that nobody dares to fight them—not to be freaking politically correct, much less to keep depraved sensualists in Hollywood satisfied. (And they really let out an enraged howl when President Trump countermanded Obama’s order. I voted for Mr. Obama in 2012, although I later regretted it. I couldn’t have voted for Romney either though, or even the Libertarian Johnson for that matter. If the new attempt at a populist reform of the Republican Party fails, then I will be without a party, which maybe is best for a monk anyway.)

An effective war against stereotypes would clearly result in more cop killings (“black men are criminals”), more terrorism (“Middle Eastern men are violent terrorists”), a weaker military (“transsexual people are weak and psychologically messed up”), more children being bitten by dogs (“Rottweilers are vicious”), and on and on. The new left doesn’t seem to care about what is actually effective, as they prefer their own ideological ideas of equality and “justice” to empirical reality. Even now the rejection of stereotypes—which do have a firm basis in reality—has resulted in spiking crime rates in America due to police fearing PC backlash, and in increased terrorism in Europe due to politically correct selective blindness concerning Islam.

Sure, one can say that each person should be judged individually, which would be fine once we get to know each person; but until then we are constrained to go with generalizations and stereotypes. And even afterwards such generalizations are still simply unavoidable, and valuable. Even the progressive left indulges in stereotypes (racist cops wanting to murder black people, or Trump supporters being fascists, for example). The best we can do is to refine the stereotype, not eliminate it, unless the stereotype is absolutely false; the trouble lies not in stereotypes, but in insisting upon the validity of a stereotype in a specific case even after conflicting evidence has come to light. And if the stereotype is really a faulty one the conflicting evidence will arise pretty quickly.


Note: Anyone curious about crime statistics related to race in the United States may be interested to read a report called “The Color of Crime 2016,” which may be found here. Also, there is quite a lot of information on wikipedia, for example in the article “Race and Crime in the United States.” Or, you may prefer to go straight to the main sources, the US Department of Justice and the FBI, who publish this stuff on their websites. Good luck finding statistics on race and crime in Europe. For some odd reason the governments there don’t want people to know.