The Establishment Machine vs. Roy Moore

I don’t think The Washington Post, the Republican establishment, in this effort to try to take out Roy Moore, I don’t think this is about protecting young women, I don’t think it’s about sexual assault. I think this is about trying to destroy the career of Roy Moore to stop the momentum of the anti-establishment, America-first populist nationalist movement that’s taking place largely within the Republican Party.  —Alex Marlow, editor-in-chief at Breitbart


Homosexual behavior is a ground for divorce, an act of sexual misconduct punishable as a crime in Alabama, a crime against nature, an inherent evil, and an act so heinous that it defies one's ability to describe it. —Judge Roy Moore

Seriously, I really don’t want to get into the habit of making commentaries on current political events, as there are plenty of people out there doing just that, and a lot of them can do it better than I can. But the current event in question is such a classic example of a corrupt, sleazy political establishment fighting tooth and nail to maintain power in spite of the people it supposedly represents that I can’t resist. Or don’t want to resist anyhow.

For those of you who woke up from hibernation or some other form of suspended animation just a few hours ago, or are living outside America and don’t give a damn about US politics, the situation is this: Jeff Sessions, formerly a senator for the state of Alabama, resigned from the US Senate in order to become Attorney General for the Trump administration. So, a new senator for the state of Alabama had to be elected to take his place. Luther Strange had been appointed to take Sessions’ place until the election would be held, and he was an Establishment man supported by the elites of the Republican Party for the primary election. Even President Trump was somehow persuaded to endorse Strange, regardless of the fact that he manifestly represented the corrupt elitist Swamp that Trump had vowed to drain—although he did so half-heartedly, and more or less apologized for it afterwards. But a populist, an outsider, and a supporter of Trump’s agenda, also ran in the primary: Roy Moore the suspended Chief Justice of the Alabama Supreme Court. (This was the second time he had been suspended—the first time was in 2001, when he refused to remove a monument, which he had sponsored, honoring the Ten Commandments, from the Supreme Court building; and the second time was for stubbornly enforcing the state ban on same-sex marriages, despite the fact that the federal government had declared the ban unconstitutional.) Since he was suspended anyway, Judge Moore resigned from his position and ran for the Senate.

Moore, it should be noted, is a very conservative fundamentalist Christian who, for example, openly despises Islam and considers homosexuality to be abomination (and it may as well be pointed out that ALL major world religions, as far as I have seen, including Buddhism, declare homosexuality, at least among males, to be immoral and wrong). He has some rather strange ideas, but he is a populist and definitely not a corrupt Republican insider, and possibly for these very reasons he is quite popular in Alabama.

And presumably for these very same reasons again, he is loathed virulently not only by the left, and its propaganda arm the mainstream media, but also by the Republican Establishment. The Republican Party, led by Mitch McConnell, pumped millions of dollars into Luther Strange’s campaign, only for Moore to beat him handily. Shortly after the primary election the left-leaning Washington Post published an article essentially accusing Moore of illegally siphoning funds from his own Christian organization, the Foundation for Moral Law. But the people of Alabama, most of them anyway, didn’t seem to care all that much.

Then a few weeks later, just recently in fact, the Washington Post came out with another article alleging that Roy Moore had behaved inappropriately with teenage girls in the late 1970s, when he was in his early thirties. Most of the girls were high school students above the legal age of consent, which was sixteen at the time; but one woman has come forth saying that he tried to rape her, and another claims that he fondled her sexually when she was fourteen and still a minor. Also there are accusations that he provided alcohol to minors. Moore denies that he tried to rape anybody and that he never dated underage girls or gave them booze, but doesn’t exactly deny that he dated school girls of legal age almost forty years ago.

Now obviously, it can hardly be a coincidence that suddenly 38-year-old mud is being flung at Moore from all directions just before the big senatorial election. There are people more knowledgeable than I am saying that the Republican Party was very probably involved in providing “opposition research,” or the fruits of Machiavellian scandalmongering, to the Washington Post for the purpose of taking Moore down. Even if this is not the case, high-profile Republican elites, including McConnell, Paul Ryan, and John McCain, lost no time in declaring that Judge Moore is evidently guilty of grievous misconduct (almost forty years ago) and should drop out of the senatorial race.

The thing is, as I’ve mentioned elsewhere, there is an insurgency going on within the Republican Party, with tens of millions of people thoroughly fed up with the elitism, corruption, spinelessness, and incompetence of the Party leadership; and the said leadership is desperately fighting tooth and nail to nip this thing in the bud before it gets any bigger. They would apparently prefer to cut their losses and lose elections, even to become the minority Party, rather than allow this Trumpian populist reform movement to go forwards. Rather like globalist politicians in the UK rejecting the democratic will of the people to fight Brexit, the American Establishment, on both sides, has refused to accept Moore’s candidacy, and the possibility that he might actually sit in the US Senate next year. 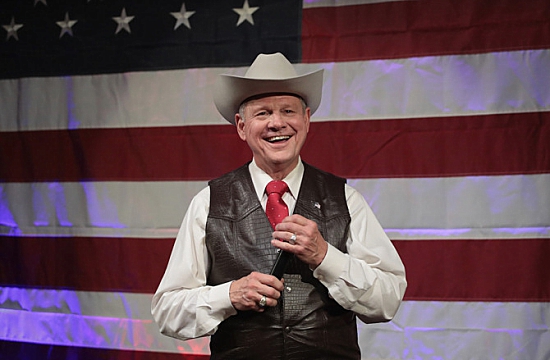 Those of the Establishment are committed not only to the so-called New World Order of globalism and a borderless welfare state, but of course they are also very much committed to their own privilege and power—even though lately they’ve been exercising this power against their own electorate, even to the point of siding with the opposition Democrats against Republican voters. They see President Trump as the enemy no less than do the Democrats, and they want desperately to stonewall the will of the people, not even caring much about how obvious they are about it, assuming that the people, like sheep, will passively give up, forgive and forget, and go back to letting the Republican elites do whatever they like while pretending to serve these same people. (No doubt the elites believe that they know better than the masses, which may actually be true in some cases. But in a true democracy, the will of the people is sovereign, even if they want to vote for someone like Judge Roy Moore.)

With regard to the accusations which are being made against the pious Judge, let’s not assume the very worst. Let’s give him the benefit of the doubt and say that he didn’t try to rape anybody. But let’s assume that Roy Moore, when he was young, dumb, and full of whatever, took a walk on the wild side and indulged in a little dalliance with “jailbait.” Well, if I lived in Alabama I would still certainly vote for him, and for two reasons.

First, that was a long time ago. The new left, and the old right when convenient, wallow in the stupidity of judging past events by the standards of 21st-century political correctness; and for a man in his thirties to date girls in their teens, especially in the deep south where it used to be the norm, was simply not that big a deal back then, even though beyond a certain point it was illegal. Elvis Presley, the King, mated with a 14-year-old girl and didn’t even bother to keep it a secret, and in those days it was not seen as some nightmarish abomination. If a girl were openminded about marriage while still a teenager, then it would make better sense to date a successful lawyer already set up in life than to date a fellow high school student. Besides, aside from a few saints and some extremely boring politically correct betas, pretty much all guys have behaved inappropriately toward females at some time or another. That his enemies had to dig up events almost forty years old in their attempts to destroy him, relying upon current anti-pedophilia hysteria, could be seen as a real tribute to the man. Who knows, maybe he’s even changed his ways since then, considering that there have been no allegations of similar behavior since his marriage more than thirty years ago.

Second, this is obviously a Machiavellian hit job against Moore by a remarkably sleazy, corrupt political Establishment backed up by a propagandist press, too stupid or too desperate even to care about how obvious they are being. This is dirty politics, not concern for teenage girls who are now in their fifties. When a member of their own side does something similar or worse, these same people usually remain conspicuously silent. If the left and the Republican Swamp are fighting tooth and claw against letting this man enter the US Senate, then I’m all for him. As I’ve said before, this is war, a war for western civilization; and there is some truth to the old saying “The enemy of my enemy is my friend.”

(I certainly don’t agree with all of Judge Moore’s opinions, although I do agree overall that the new “liberal” agenda is unrealistic, morally bankrupt, and manifestly conducive to decadence, decline, and fall. I agree that abortion, which Moore opposes, is, technically, from a biological point of view, the killing of an individual human life, although there may be circumstances in which it is the lesser of two evils. Homosexuality, which he also opposes, I consider to be a person’s right, and it shouldn’t be positively illegal, yet glorifying sexual aberrations and urging them into the mainstream is simply not conducive to the integrity of a society or a civilization. Islam, which Moore abhors, I consider to be, in its purer forms, incompatible with liberal western values. Free trade, which Moore opposes, really is disadvantageous to developed countries, as industry, and consequently jobs, tend to be exported to foreign nations with cheaper labor. As for Moore’s belief that Barack Obama was not born in the USA and technically did not have the right to be President, well, I don’t know where he was born. And I agree with Moore in preferring Putin to Merkel, on utilitarian political grounds anyhow.)

In conclusion, I observe that a vote for Moore is a vote against the corrupt political machine and the neo-Marxist new world order, as well as a big middle finger hoisted against the likes of Mitch McConnell and John McCain, which makes it all worth it somehow.