Transgenderism in the Early Roman Empire

In classical western culture, what is now called transgenderism was not entirely unheard of. Rome even had at least one transgender Emperor: Elagabalus, considered one of the seven notorious tyrants of Rome, sometimes dressed as a woman, married a man and called himself the man’s wife, and even allegedly dressed as a (female) prostitute and sold himself to passersby within the precincts of the imperial palace. Almost needless to say, he didn’t last very long before being assassinated by his own soldiers.

Probably the most prevalent form of transgenderism in those days, however, was probably the phenomenon known as the eunuch—male slaves who were castrated, usually before puberty, and who were often used as sex objects for men as well as domestic servants for rich women. As Rome degenerated, eunuchs became more common and rose into social prominence, until shortly before the fall of the west they were often promoted to the positions of state ministers; and one of the Byzantine emperor Justinian I’s most successful generals was a eunuch named Narses who defeated the Ostrogoths in Italy, regaining that peninsula for the Eastern Empire.

Even so, as shown in Dr. Monty Python’s historical documentary The Life of Brian, the more usual modern form of transgenderism also existed among the common people in the early days of the Empire. The transcript below is from a scene in which members of the People’s Front of Judea, a revolutionary organization fighting against the Roman imperialist invaders of the Holy Land, are attending some gladiatorial combats at the local arena and discussing politics…

JUDITH: …I do feel, Reg, that any anti-imperialist group like ours must reflect such a divergence of interests within its power base.

FRANCIS: Yep. I think Judith’s point of view is very valid, Reg, providing that the movement never forgets that it is the inalienable right of every man—

FRANCIS: Or woman, to rid himself—

FRANCIS (to Reg): Thank you, brother—

FRANCIS: Or sister…………Where was I?

REG: I think you finished.

REG: Furthermore, it is the birthright of every man—

REG: Why don’t you shut up about women, Stan. You’re putting us off.

STAN: Women have a perfect right to play a part in our movement, Reg.

FRANCIS: Why are you always on about women, Stan?

STAN: I want to be a woman. From now on, I want you all to call me Loretta.

STAN/LORETTA: It’s my right as a man.

JUDITH: Well why do you want to be Loretta, Stan?

STAN/LORETTA: I want to have babies.

REG: You want to have babies!?

STAN/LORETTA (defensively): It’s every man’s right to have babies if he wants them.

STAN/LORETTA: Don’t you oppress me!

REG: I’m not oppressing you, Stan, you haven’t got a womb! Where’s the foetus gonna gestate? You gonna keep it in a box?

(STAN/LORETTA bursts into tears, resulting in an awkward silence)

JUDITH: …Here, I’ve got an idea. Suppose you agree that he can’t actually have babies, not having a womb, which is nobody’s fault—not even the Romans’—but that he can have the right to have babies.

FRANCIS: Good idea, Judith. We shall fight the oppressors for your right to have babies, brother—sister! Sorry.

REG: What’s the point of fighting for his right to have babies when he can’t have babies!?

FRANCIS: It is symbolic of our struggle against oppression!

REG (in an undertone): Symbolic of his struggle against reality. 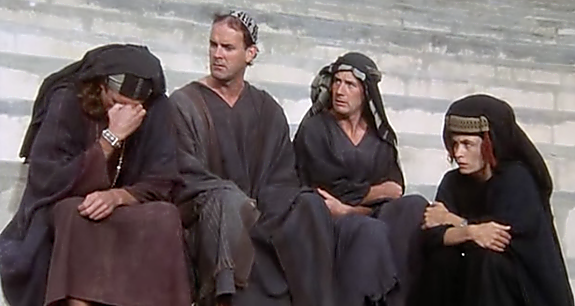